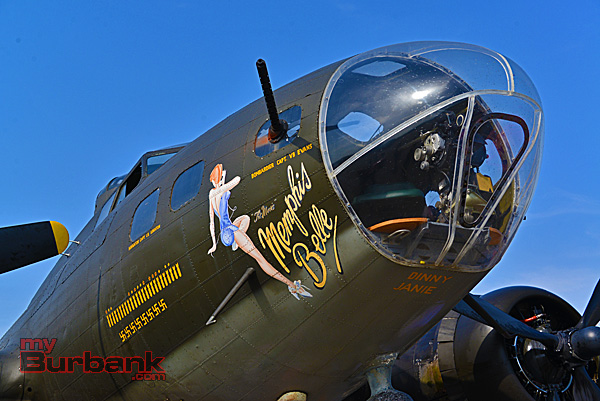 As a deep, deafening roar passed overhead, residents and hikers on the side of the Verdugo Mountains were greeted on Saturday and Sunday with a sight that appeared to be coming from an episode of “12 O’Clock High.”

Fresh on the heels of “FiFi,” the B29, Burbank is playing host this weekend to the “Memphis Belle,” a World War II era B-17 bomber.    Named after the famous “Memphis Belle” which fought in 25 combat missions over France, Germany, and the Netherlands, the new Memphis Belle is used by the Liberty Foundation of Douglas, Georgia to raise awareness of the cost of freedom all American enjoy.

According to Scott Maher, Director of Operations at the Liberty Foundation, we are losing nearly 1500 World War II veterans each day, and that number is accelerating as the veterans get older.

Bringing the Memphis Belle on national tours helps ensure “we can continue to teach younger generations the high price of freedom” by displaying a part of American history which played an important role in bringing an end to the Second World War. And the contributions of our veterans who flew and fought in these machines should never be forgotten.

One of 9 B-17s still flying, Maher noted the new Memphis Belle was manufactured in Long Beach at the Douglas plant, while the Liberty Foundation’s second B-17, Liberty Belle, was produced in Burbank’s Lockheed-Vega plant.  “It is a pleasure to bring the Memphis Belle to Burbank Airport, and help preserve Burbank’s contribution to history” added Maher.

Visitors were invited to enter the bomber, look at the many fighting stations, cockpit, and bomb bay.  Others bought a ticket and flew in the bomber, much as crew members flew in wartime.  Several World War II veterans were in the crowd viewing the Memphis Belle, surrounded by small groups of visitors desiring to hear a word or two of their experiences, and politely asking the aged warriors to sign souvenir books.

The new Memphis Belle, a B-17G, was originally a civilian fire bomber.  The aircraft was renamed and rebuilt prior to the 1990 film “Memphis Belle,” appearing in the film as the original.  From Burbank the Liberty Foundation will move the aircraft to Bakersfield for their next appearance.