You could call Burbank High’s sweep of host Hoover in a Pacific League girls’ volleyball match on Tuesday a primer for tomorrow’s showdown with crosstown rival Burroughs.

“We treat every match like a normal match,” first-year Burbank coach Karl Rojo said of the upcoming clash with the Indians that will be contested at Burbank with a 6 p.m. start. “We don’t want to make it too big, but we know that it’s a big match. We need to be comfortable, be composed and be able to execute.”

Hoover opened up a 4-1 lead in the third game, and it was tied at 5-5 on junior defensive specialist/libero Sara Lagonegro’s winner and 6-6 on junior opposite hitter Rachel Wiley’s smash.

Burbank seized control and moved ahead 12-7 on a kill from junior middle blocker Nicole Winters, who had seven kills. 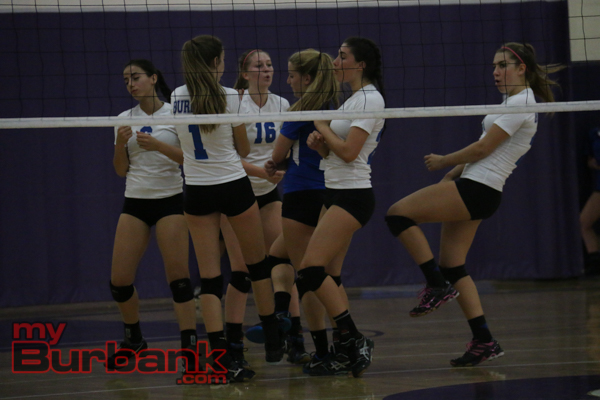 From there, the Bulldogs dashed ahead 19-11 on sophomore middle blocker Erin Lashkari’s bullet, but Hoover (2-8 and 1-5 in league) managed to edge within 19-15 on senior middle blocker Megan Hersh’s kill.

The Bulldogs (6-4 and 4-2 in league) then outscored the hosts 6-1 with junior outside hitter Hailey Heath contributing three points.

“I just try to focus on the match that we’re playing and try to have a positive mind set,” said Heath, who had a match-best 13 kills with 11 digs. “We take it one point at a time, one game at a time and one match at a time. But in my mind, I want to play well. Even though it’s big [playing Burroughs], we don’t want to make it too big.”

Burbank dashed ahead 2-0 in the opening game on a block from Winters and an ace from junior outside hitter Colette Reynolds. It was tied at 5-5 and 6-6, but the Bulldogs moved in front 11-7 on junior libero Carly Palmisano’s ace which forced Hoover to call time out.

Burbank scooted ahead 14-10 on a kill from Reynolds, before forging a 16-12 lead on a tapper from sophomore setter Melissa Daniel (37 assists). It became 20-17 on Heath’s winner. 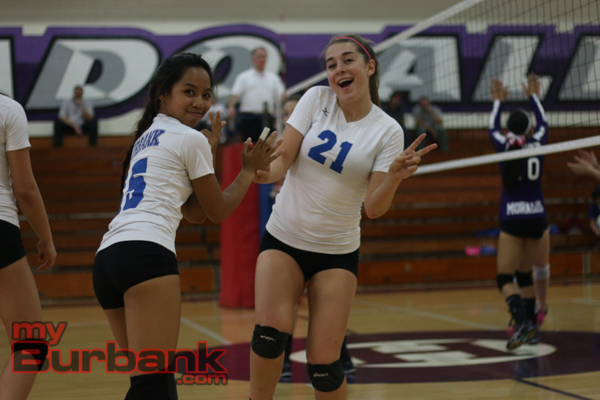 “I have a competitive state of mind,” said Reynolds, who finished with 10 kills. “We need to be confident when we play Burroughs. We know they’re a good team and that we’re going to be the underdog. But we think we can win. We need to play at a higher level.”

The Bulldogs tallied the final five points that included a kill from Daniel, a block from Winters, consecutive service aces from senior opposite hitter Marina Manokian (three aces) and a kill from Winters for the game-winner.

The middle game was knotted at 2-2 on Heath’s kill, but the Bulldogs outscored the Tornadoes, 4-2, for a 6-4 advantage on Heath’s winner.

From that point, the Bulldogs captured the next four points including a Reynolds tapper that made it 22-15, Palmisano’s ace for a 24-15 advantage and a kill from Reynolds for the game.