“The students chose to create five original Twilight Zone-esque episodes, 10-20 minute pieces that will make you think, laugh, and give you goosebumps,” said Terry.

“Taking complete ownership of the entire creative process, from the inception of ideas, to writing and directing, to staging the entire production, the students were guided by new drama teacher Annie Terry, whose strong background in devised theatre helped the kids navigate the dynamic collaborative process.”

“When it comes to shows like The Time Zone, I’ve found that adapting literature and/or creating works from scratch allows my students to tap into all-new reservoirs of creativity, often ones they might not have known they possessed,” Terry added. “By giving them more ownership in the work we do, I see them naturally take more responsibility for that work.”

“They begin to really respect their own vision, and it’s a process that always winds up being more rewarding (and maddening and cathartic and stressful and triumphant) than your typical play production. It’s also a terrific amount of fun spent together. We hope you enjoy the fruits of our labor!”

According to Terry, the students also felt strongly the show be inclusive to under-represented populations and stories within their demographic.

Terry described the five vignettes that will be performed:

“Yes No Maybe” — A scientist working on an experiment turns to the voices in his head for advice. When his experiment goes horribly wrong, he must live with the fallout of his insanity.

“They’re All Made Out of Ticky Tacky” — A mother, who desperately wants to have a perfect family, realizes that perfection can never be achieved without consequences.

“Watch” — A selfish and greedy man doesn’t appreciate the value of family. He is soon taught a lesson when he travels to a different time and realizes the repercussions of his ego.

“Dante’s Hotel” — When Man is given the opportunity to indulge in all of his desires, he witnesses the seven levels of sin.

“Counterclockwise” – As two girls grow up together, they share laughter, tears, and secrets. While one of the girls is more open, the other experiences a hellish nightmare in which she sees what she cannot attain.

“I think this experience of writing, directing, and teching our own play has been extremely rewarding and educational,” commented Play Production student co-president Fiona Maeve Czerwinski. “It’s so valuable to see a production from all aspects, as it shows us a side that we have never really been exposed to. I’m so excited to a be part of a show that crosses boundaries and pushes the limit like never before.”

“Being able to see students that I’ve watched grow in this program leading and producing things on their own is truly amazing to see,” added co-president Livvie Trautmann. “For this show, it isn’t just acting and taking direction, now they also get to direct and write it themselves. I’ve never seen them more exited or determined to do something in Drama since I’ve been a part of this program. It’s going to be a good show.”

Performances begin at 7:00 p.m. at Burbank High School’s Wolfson Auditorium on January 27 and 28. Tickets are available at the door for $10 general admission and $5 for students. 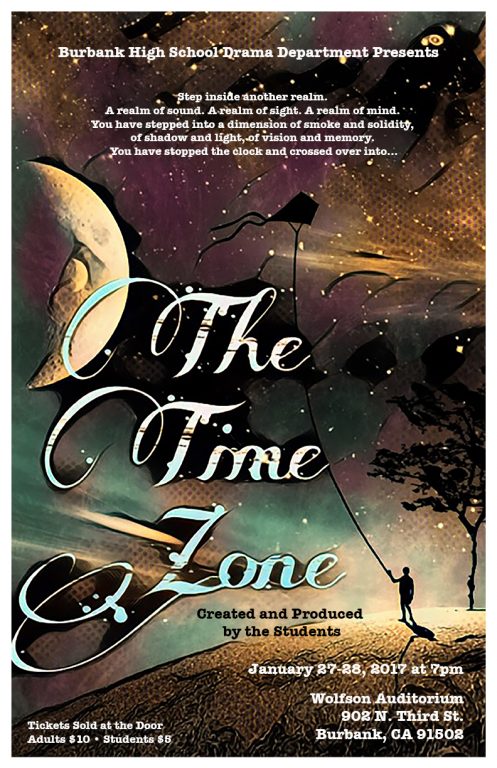