More than 30 people took the time to address the City Council Thursday evening, mostly on the topic of the extension of the Channel Bikeway. When the last speaker left the podium, at least two hours had ticked away. Their patience paid off when the council finally took their vote at 10 p.m., approving the extension and selecting one of five possible routes. 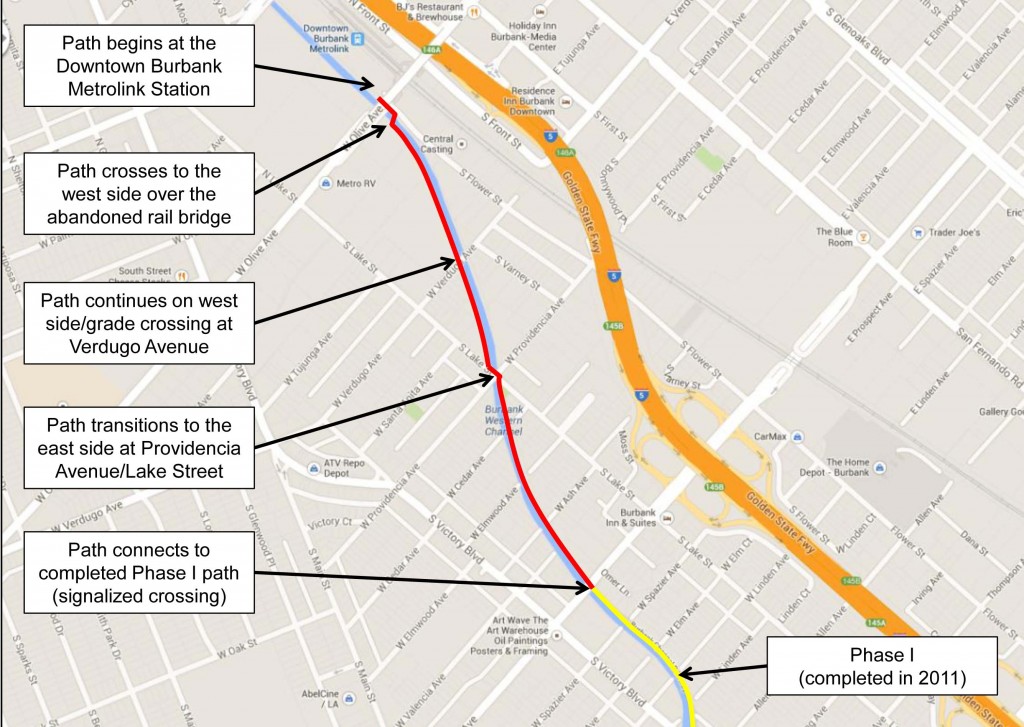 Phase one was completed in 2011, and extends from Alameda Avenue to Victory Boulevard. Phase two of the project would extend the bikeway from Alameda to the Downtown Burbank Metrolink Station,

The Channel Bikeway extension, or phase two, was considered by the council about a year ago, but residents on the proposed path asked the council to reconsider the route. They expressed concern with the proximity of the path to their property.

On Thursday, residents, including some who live near the bike path, mostly supported the project, and shared their varied reasons for doing so. Some said they faced health issues, and the existing bike paths in the city provided them an opportunity to work out in a safe place, and the Channel Bikeway would present one more opportunity to do that. Others said the bikeway was a convenient way to get to where they were going, whether on bike or by foot.

Still others talked about the big picture, and said that in a world that is becoming increasingly populated, where most people still get into a vehicle to get to their destination, a dedicated bike path provided a safe commuting alternative that would also reduce pollution.

Mike Hollis, a Burbank resident who walks and bikes around the city, said he has done so from young age, and now cycles to work. He noted he also bikes recreationally with his wife, running errands and dining at restaurants.

“You have an opportunity tonight to [have the bike path] be a resource for many cyclists, to give commuters access to trains and provide benefits for recreational riders,” Hollis said, adding that it would also create a safe route to schools.

The Chandler Bikeway was created 11 years ago, Hollis said.

“Imagine what the area would look like if you did not put that in,” he said.

Hollis also said he rides along and walks on phase 1 of the Channel Bikeway, and said it was great that the bikeway would become a connection to one of the busiest Metrolink stations in the area, referring to the Downtown Burbank Metrolink Station.

Helen Kelley, however, said she had hoped “the bike thing goes up in flames,” but realized she might be the minority in that regard. She said the speakers thus far did not live in the area, and that she did not want to see mature trees cut down, did not want to look at a cement wall or have one-inch bushes put in.

Justin Okin and his young daughter, Rose, spoke next, in support of the project. They live on Cedar Avenue, about 50 yards from the bike path. Okin said there are more than 10 families with children under 6 who live nearby, and said there was quite a lot of excitement about the proposed extension.

The full council chamber chuckled and applauded when Rose, who was in her father’s arms at the time, added: “I want the bike path.”

Brian Castillo, who said he lives in the area directly impacted by the path, also supported the project.

“I’ve seen what projects like this have done to a neighborhood,” the 30-year resident and father of three young children said, calling it an opportunity to rejuvenate the area with improved lighting and landscaping while promoting wellness.

Michael Fishman, of Pure Fix Cycles on Victory Boulevard, said he opened his business about four years ago and supported the extension of the bikeway. Fishman, also a member of Walk Bike Burbank, a local chapter of the Los Angeles County Bicycle Coalition (LACBC), noted that more than 10 of his employees bike to work, using the Chandler Bikeway.

“When they have not been on the path, they were hit by a car,” Fishman said, encouraging the council to give more people a reason to bike to work, to get in shape and to have fun.

He also encouraged the council to do so to help him sell more bikes, and added: “Cyclists spend more money than people in cars.”

Fishman and other speakers at the meeting noted that improved bike infrastructure would help attract more people, especially young professionals who are not “married to their cars,” to the city.

Council members noted that much had been done to work with residents who expressed concerns, but wanted to do what was best for the majority of residents.

The roughly $4.4 million project will be covered mostly by grants.

A $2.7 million Metro grant will cover a portion of the cost, Young said. About $982,000 will be paid for by a grant administered by the California Natural Resources Agency. The Metro grant requires a 20% match, and the city will put $680,000 from development impact fees toward the project. The development fees are paid by those who develop in the city, and are to be used to offset any impacts on transportation, Young said.

The project will begin in summer 2016, and could be completed within approximately eight months.