The Colony Theatre’s Blame It On Beckett is sensationally funny. Last Saturday’s audience put the laugh tracks to shame.  And the intensity of one particular scene held this same audience in air hissing silence. PLAYWRIGHT JOHN MOROGIELLO captures the truth of today’s world of work and makes it sing in this remarkable play. 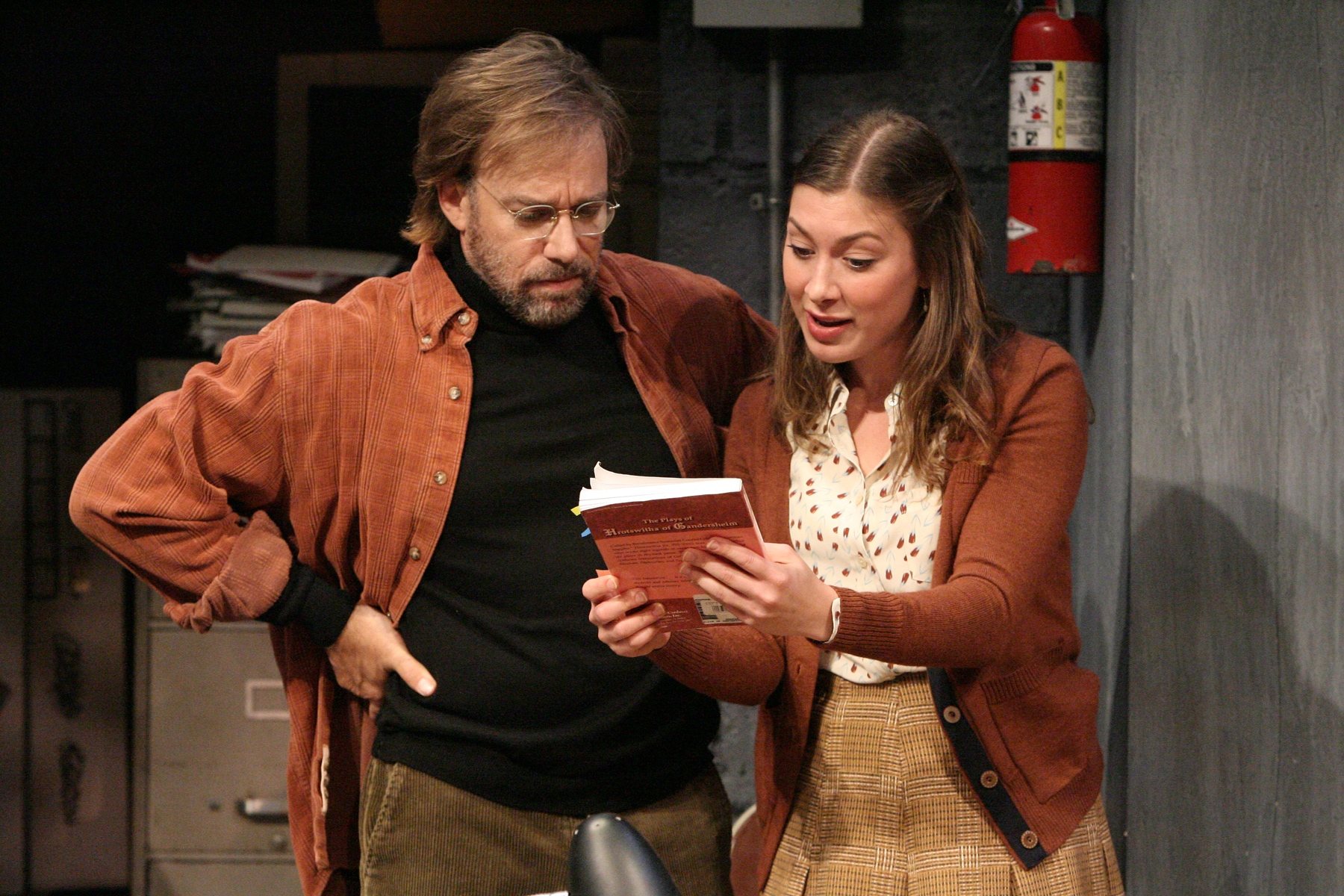 Louis Lotorto and Blythe Auffarth star in the WEST COAST PREMIERE of BLAME IT ON BECKETT, now playing at the Colony Theatre in Burbank. (Photo courtesy of Michael Lamont)

. What if you wangle a sweet internship, one where your really good ideas would surely make you stand out? Except that your supervisor is a burnt-out Boomer guy (or maybe a slightly younger Xer, still a pain in your career) dishing out cynicism and sitting in the chair that should be yours. Oh, and the Boomer’s boss has an itch that needs scratching. And an influential woman might go to bat for you in your field of dreams, if you’re willing to play ball.

What would you do, dear ingénue? If you’re Heidi Bishop (played by BLYTHE AUFFARTH) you try to make the most of your opportunity.  Meanwhile the Boomer Jim Foley (LOUIS LOTORTO), the Boomer’s boss Mike Braschi (BRIAN IBSEN) and the influential Tina Fike (PEGGY GOSS) are each trying to make the most out of her. All four actors gave brilliant performances, making the most of every moment.  DIRECTOR ANDREW BARNICLE, who also directed Moonlight and Magnolias for the Colony, is clearly at home with high-octane plays. 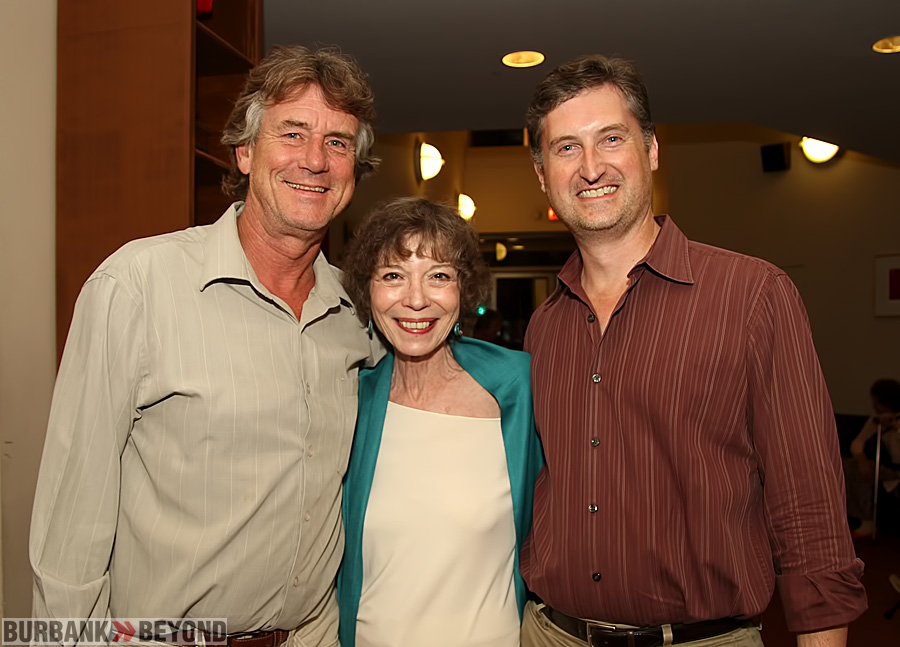 So where does Beckett fit into all this and why does he get the blame? You know how modern art makes some people think that they too can be Picasso even though they can’t draw a paper bag (or their way out of it)? Well, in the opinion of Boomer Jim, Beckett did more or less the same thing for writing plays. And now a horde of scribblers inundates poor Jim with endless piles of words on a page pretending to be plays.

Yes, Jim is a dramaturge (or dramaterd as boss Mike renders it) of a non-profit theatre that trades on the name of established, well-regarded playwrights like Tina Fike. He’s the gatekeeper who keeps the manure of mediocrity from oozing over the theatre’s sacred threshold. And Heidi’s the intern who’s sure that Jim’s just too lazy to ferret out the theatrical diamonds hiding just beneath the mud.

Eager intern versus jaded supervisor. Thinking change is easy versus giving up on making any changes at all. These eternal conflicts of the workplace play out a zillion different ways. Like one young woman confided to playwright John following the reading of his play, “I know nothing about theater but this is my life as an intern.”  But this is the magic of Blame It On Beckett: out of the sharply drawn details of a particular situation, we can make out universal truths of the human condition. 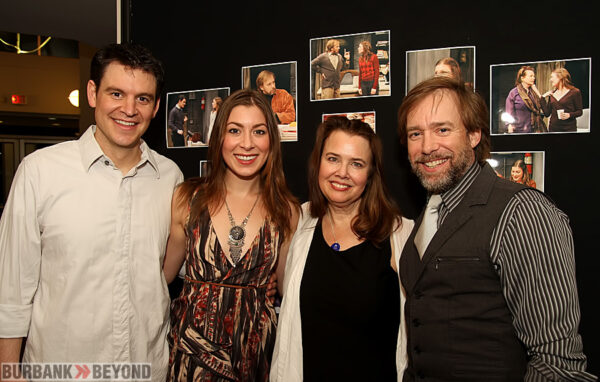 The cast got together following the opening night performance, pictured are Brian Ibsen,Blythe Auffarth,Peggy Goss, and Louis Lotorto. (Photo by Ross A. Benson)

Given the long odds of great new plays making it to the stage, how did Blame It On Beckett survive the gatekeeper’s gauntlet?  Well that’s the magic of The Colony Theatre: they’re able and willing to extract the theatrical gems and leave the rest behind. So much so, that the Colony’s entire current season is a “Season of Premieres”.  And so far they’re batting a thousand. 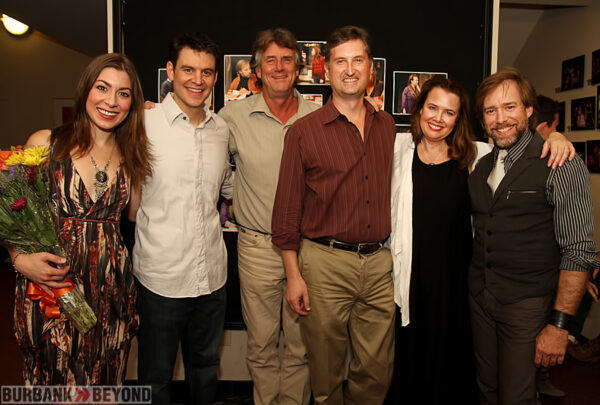 The cast of Blame it on Becket pictured are join by Playwright John Morogiello and Director Andrew Barnicle, following Opening Nite Curtain. (Photo by Ross A. Benson)