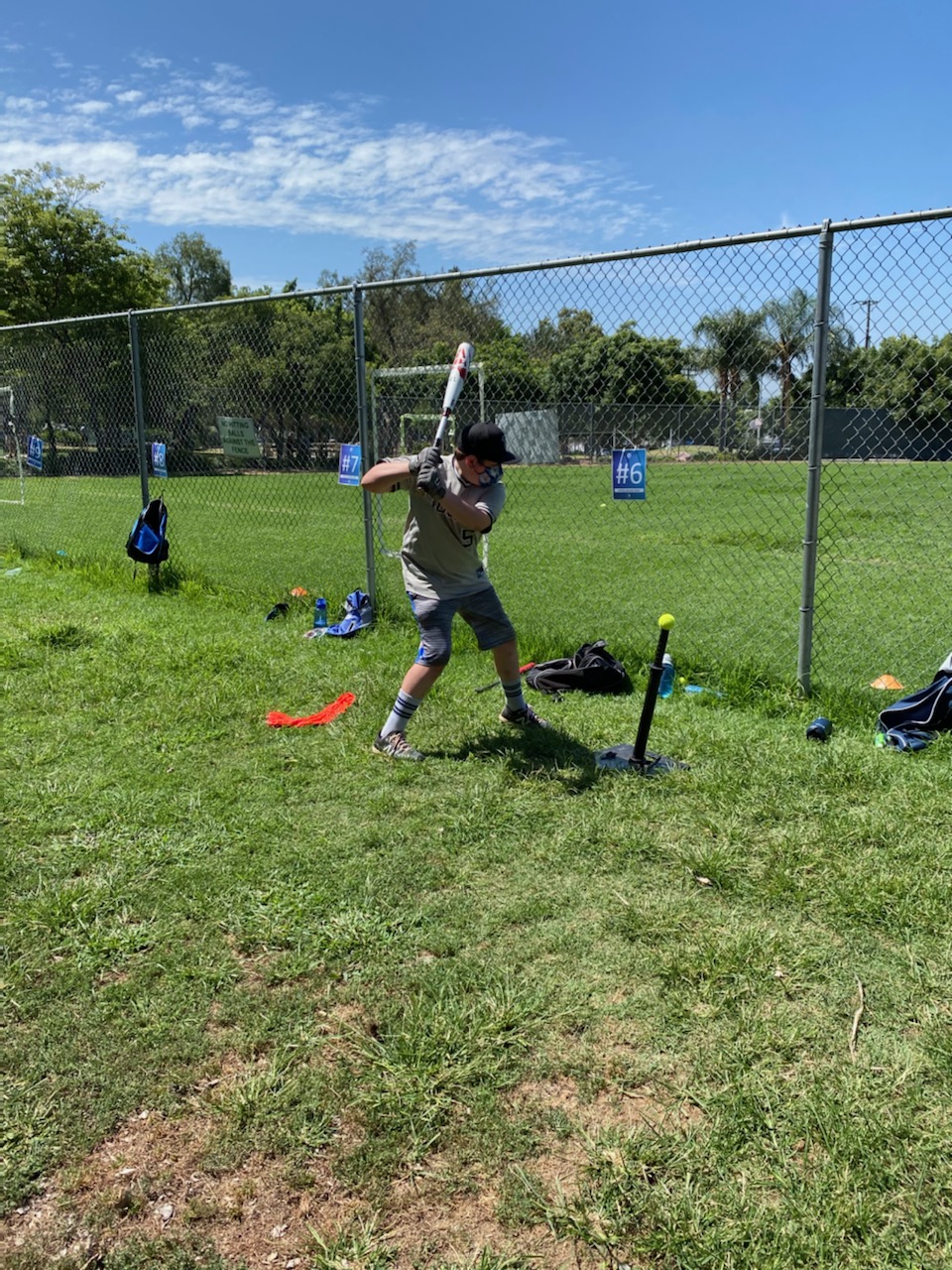 Amid the worst pandemic since 1918 when the Spanish Flu infected 500 million people or roughly one-third of the world’s population, COVID-19 has wreaked its own havoc globally.

But despite this virus, Breakthrough Sports, which was founded by Champ Baginski, has flourished this week during its five-day, three-hour youth baseball camp at McCambridge Park.

The camp, in conjunction with the City of Burbank and the Parks and Recreation Department, is open to boys and girls, ages five through 14 with a maximum of 20 campers because of the coronavirus.

All of this was made possible because the camp follows all of the CDC [Centers For Disease Control] and state guidelines that include every camper and coach having their temperature checked, social distancing, no intermingling, wearing protective face masks and wearing a surgical glove on their throwing hand.

“We’re following the same protocol that the [Burbank] day-camp has followed and it’s been going on since June,” said Jon McGinley, the Burbank Parks and Recreation Supervisor for Youth Sports. “Everyone gets their temperature checked before they are allowed on the field. Everyone has to wear masks and that includes the coaches, everyone has their own equipment [baseball glove and bat] and the parents are not allowed on the field.”

Baginski has been involved with professional sports teams like the Los Angeles Clippers, Anaheim Ducks and the current and two-time Super Bowl champion Kansas City Chiefs, for more than two decades.

“At the professional level, it is always about money,” Baginski said. “But it was always my goal when I founded Breakthrough Sports, to do something that is more community based. I wanted to make these camps accessible to people of all walks of life. Last year, we had between 3,000 and 4,000 kids at our camps.”

Breakthrough Sports has brought its elite sports programming to 13 cities in Southern California, including Burbank.

In addition to being the founder of Breakthrough Sports, Baginski is one of the baseball coaches along with Mike Graceffo, who is currently the Burbank High freshman baseball coach.

“With everything that is going on, it’s nice that these kids can come here and learn the fundamentals of baseball,” said Graceffo, who works part-time at the Burbank Boys and Girls Club. “For three hours [9 a.m. to noon], they can get out and have fun and get a sense of normalcy.”

Simon Suarez, 13, lives in Burbank, plays on a travel-ball team and hopes to play high school baseball for Burroughs.

“It’s really fun to come to this camp,” he said. “I like it because you can see improvement. I want to get better.”

Jackson Taylor, 12, resides in Burbank and also hopes to improve his baseball skills.

“My mom wanted me to go outside and play,” he said. “I’m a little rusty. I haven’t played baseball in about a year. But I want to get better.”

Leo Beebe is 11 and a Burbank resident. “I’m having a lot of fun and I’m getting better at baseball,” said the second baseman and catcher. “In the games, I like baserunning. I like fooling the pitcher.”

Ella Burkhardt, 11, lives in Burbank and is the only girl among the 20 campers. “I’ve never played baseball. But it’s fun to get out. I like when we throw and catch and I like over-the-line,” she said.

Ryan Beltran is eight, resides in Burbank and despite his youth, has been to three or four baseball camps.

“I like baseball and I’ve been stuck inside,” he said. “It’s fun to get out and play baseball.”

Graceffo, who has coached in Burbank for more than four decades and has worked for the Burbank Parks and Rec Department for 41 years before retiring, is glad Breakthrough Sports offers these camps.

“These kids need to be out there,” he said. “I didn’t realize how much I miss coaching and being with the kids. Our solitude is the baseball field. We’re making the best out of a tough situation.”

Some of what the campers learn during the three hours includes the importance of stretching and doing calisthenics, ladder drills, soft-toss, hitting off the tee, bunting, learning the relay and cut-off, running the bases, playing catch and playing over-the-line.

“I’m very grateful to Champ, the City of Burbank and the Burbank Sports Office for allowing me to participate as a coach,” said Graceffo, who was inducted into the Burbank Walk of Fame in 2006, and was a coach at the Michael Jordan and B.J. Armstrong Basketball Camps, of the weeklong baseball camp.

No doubt the youngsters are equally grateful to get out of the house, have fun and to learn how to play the grand old game of baseball.

For more information about the upcoming Breakthrough Sports baseball camp that runs from August 3-7, go to burbankparks.com.