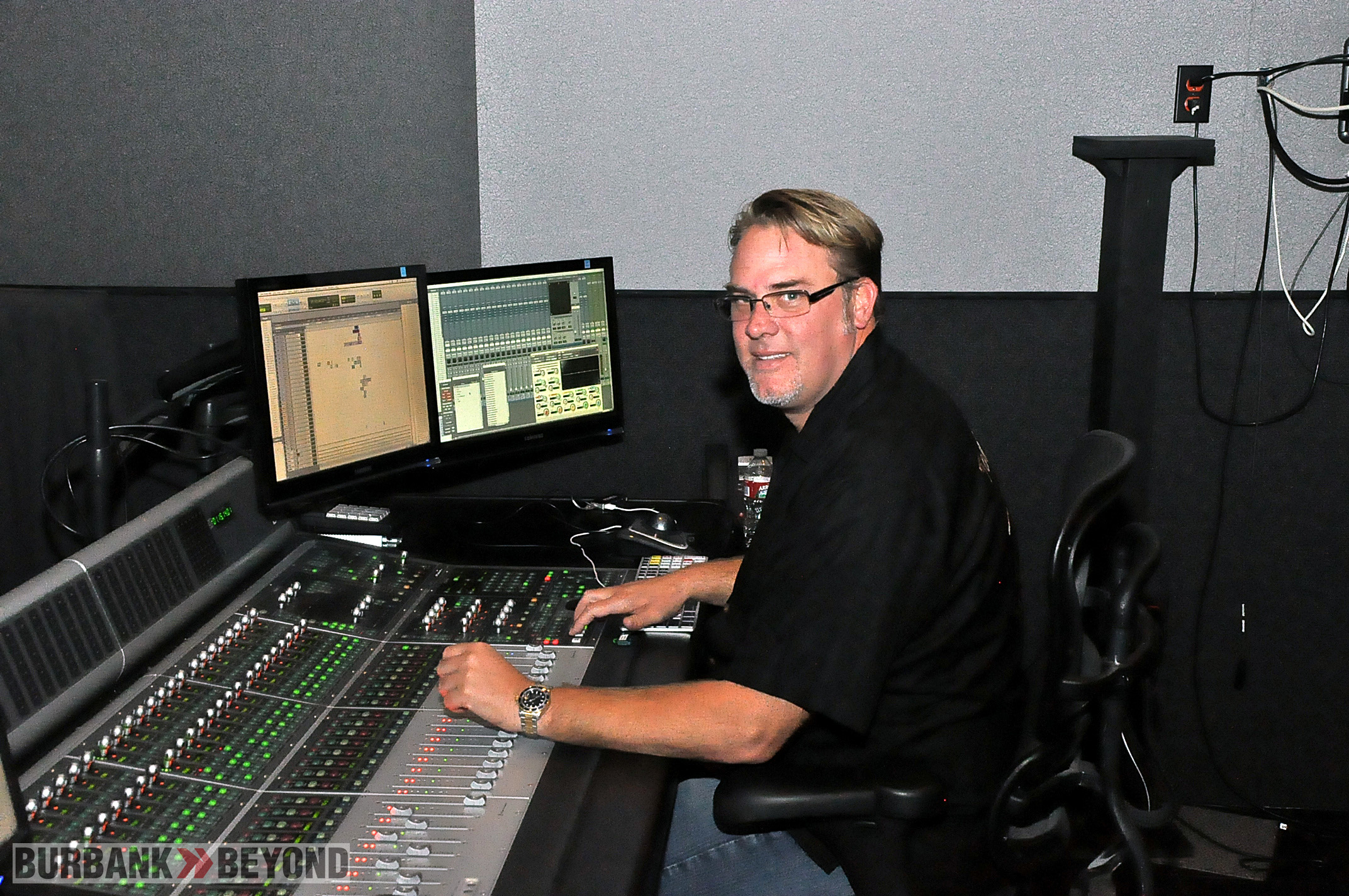 It’s not every day one gets the opportunity to meet a recipient of the Television Academy’s highest honor; the coveted Emmy Award.  Burbank’s very own, Brian Harman is one of those very fortunate winners.  Two tall, sparkling, golden statuettes sit on his mantle to remind him of his accomplishments.  Recently, I met with Brian at his offices in Burbank, to discuss the Creative Arts Emmy Awards and how it feels to have your name called twice.

DD:      Please explain to me and BurbankNBeyond.com readers exactly what do you do and how long have you been at it? 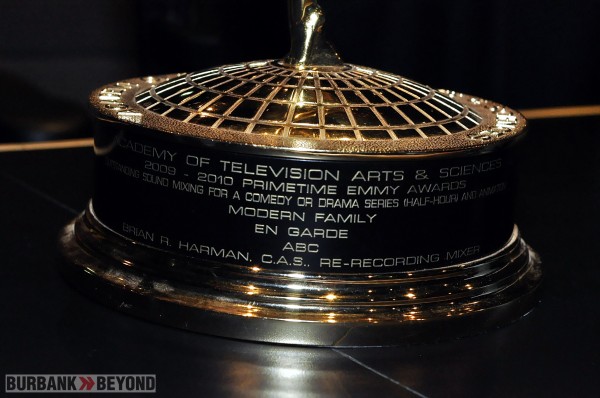 DD:      Congratulations are in order for your second Emmy win.  Tell me about the first time you won and what was it for?

BH:      My first Emmy win was for Modern Family’s, En Guard.  It was the fencing episode.

BH:      It was great!  My dialogue mixer called me at 6 in the morning because the nominations come out at around 5:45am.  The last three years he’s done that.  We’ve been nominated three years in a row and have won twice.

DD:      That’s a huge deal!  So, when you’re at the award show for the first time, waiting with all of your colleagues and they call your team…  What did you feel?

BH:      Wow!  I was just speechless.  It was just ‘WOW’!  I was on Cloud 9.  This year I took my oldest son with me and it was great to see his face when they called us as the winning team.

BH:      He was more shocked than anything and couldn’t move.  I tried to get by him so I could walk up on stage and he wouldn’t move.  He was shocked.

DD:      Did he say anything on the ride home?  Did he tell any of his friends that his dad was cool?

BH:      He was just really happy for me.  He did, however, make me drive by some girls’ houses on the way home because we were still in our suits at midnight.  He wanted to show them the Emmy.

DD:      Did you always want to get into this part of the industry? 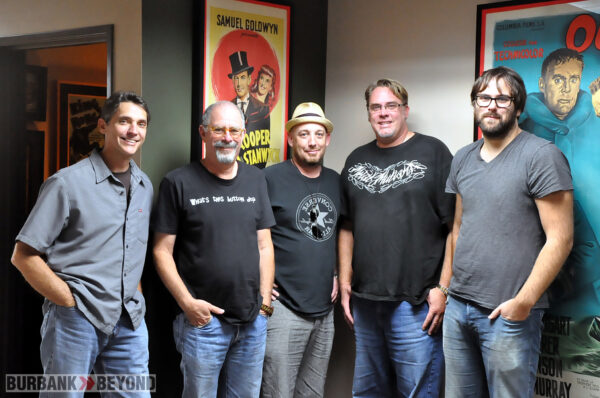 DD:      Going back to your colleagues and your recent Emmy win….. What do you think sets your team apart from others?  I know there are a lot of great people nominated but only one wins.  What made your episode or show special?

BH:      Dean [colleague and head sound mixer]and I care about our craft.  Actually everyone cares about their craft.  Modern Family is just a good show.  To get nominated to be in the ‘five’ was a big deal.

DD:      Which shows were nominated alongside Modern Family?

BH:      Besides Modern Family, I am working on Ben & Kate, Neighbors, Switched at Birth and Sons of Anarchy.

DD:      How many guys work with you?  What other things do you do here at this location? 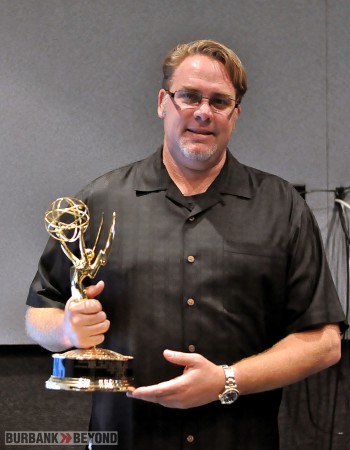 BH:      We have five stages.  Three dub stages and a stage for Foley and one for ADR.  We also have our main offices on Riverside Drive.  I actually go wherever the clients need me to go. For Ben and Kate, I will need to go to Fox in West LA.  Since everything is computer-based, I go wherever I need to go.  I can just plug in and work where ever I am.

DD:      In the last two decades of working in television, what changes have you noticed that may have affected our society?

BH:      Cable has broadened how shows are shot and what content they’re getting away with.  Television used to be a set cycle.  It was September to May.  Now, with cable it’s more year-round.

DD:      I believe HBO’s Sex and the City was the first to break from tradition and premiere in the summer.

BH:      It might have been.   The Shield was probably right behind it because that was about 12 years ago when FX came on.   Now everybody’s doing it… TNT, TBS.  Who would have thought American Movie Cannel would have their own programming?  For what I do it’s great because there is more content out there.  There is more work.  It’s a totally different time.  Many shows get away with a lot of stuff as far as nudity, language, violence.

DD:      There is no going back to the way TV used to be.  Do you think the content is better?  I know you’ve said that the culture today is more permissive as far as shows pushing the envelope.

BH:      Everything does.  Even network TV pushes it as far as they can.  I am not here to judge.  I am here to create sounds. 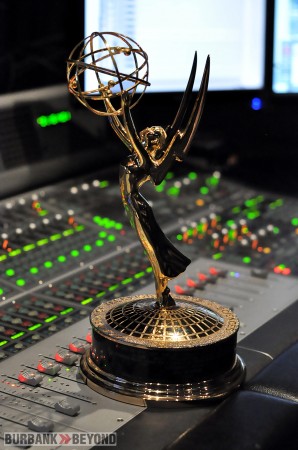 DD:      On the other hand, I think some things are more creative or might have better writers today.  You’ve got good and bad.  I remember watching a documentary on Elvis and how parents freaked out about his hips shaking but with that came better music.

DD:      Do you ever bring your boys to work and show them what you do?

BH:      Yes.  My little one has come with me to work a couple of times and he just gets bored.  My oldest has come down and set up the console with me and has helped me mix backgrounds.  I gave him the crickets and the foot tracks so he got to put those sounds into a show recently.

BH:      Then he went over on to one of the big stages and played video games all day.

DD:      You mentioned that your dad was also a sound mixer.  Did he do features or television?

BH:      He did mostly TV and also some features.  He worked everywhere.

BH:      My grandfather, Eddie Harman was a production mixer.  He worked with Gene Autry on westerns.

DD:      Does everyone on the team get their own Emmy? 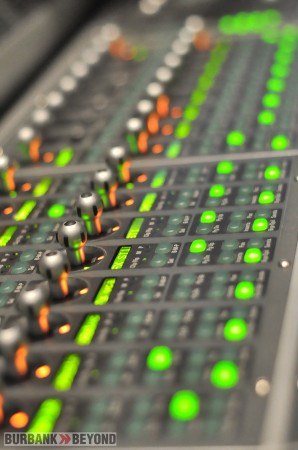 BH:      I had to think about that question for a second.    Not a lot of my friends are in the industry.

DD:      You’re very lucky to have had such a successful career and to win two Emmy’s.  I wish you continued success and look forward to hearing about your third Emmy.

BH:      Thank you very much.
Brian is still a young man in this business and I believe he and his team of experts will have a collection of Emmy Awards by the time they retire in another 20 years.  With so much family history in the entertainment industry, it’s nice to see that he’s carried on the tradition of creating television shows for viewing audiences to enjoy.  Burbank is after all, the media capital of the world.

The year was 1948 when Academy members finally selected a design that would be known today as the official  Emmy® statuette.   Television engineer, Louis McManus’ design was chosen after 46 other proposals were tossed out.  McManus’ wife was the model for the design which we see as a winged woman holding an atom.   The female symbol has become the Television Academy’s goal of uplifting and supporting the arts and sciences of television, the atom represents the electron of science, and the wings symbolize the muse of the art

PROFILE: A Minute with Officer of the Year Dan Turpin

‘Growing Up in Burbank’ – Book Review