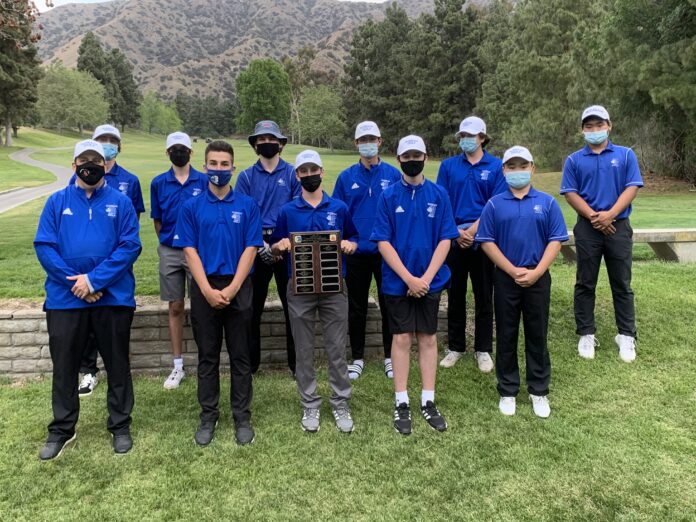 The Burbank High golf team wasn’t going to let its lead slip away and the Bulldogs came away victorious in the third and final round of the 23rd Burbank Cup at DeBell Golf Club Wednesday.
The two teams have played different formats in head to head battles with one another.
Burbank easily won Wednesday and the overall competition, winning the Cup 18-11.

The win is Burbank’s first since 2017. The competition did not take place last year because of COVID-19.

“Our team played really well today. It was a group effort. I’m very proud of our team and that we got the job done,” Burbank freshman Zach Ducore said.

In Wednesday’s format, two players from each school became a team and went head-to-head against another pair.

Burroughs’ Group 1 team of Adriel Abaoag and Emilio Huerta shot a combined 133 on the par-71 course. The Burbank High pair they were going against, UC Irvine-bound J.J. Nakao and Kevin Kienlen, shot a combined 136.

Abaoag, who is just a freshman, shot a career best of 60.
“The greens were a lot better than last week. I made a bunch of putts,” Abaoag said.

But that was the only win for Burroughs, which was missing several top golfers include Lincoln Melcher, who was out sick.

Burbank’s team of Billy Malipun and Frank Maslyk shot a combined 156 to beat the Burroughs team of Daniel Gonzalez and Trey Sanchez, who shot 161.

Ducore and Luke Carnegie shot 163 to top the Burroughs team of John Peltier and Dylan Vallejo, who combined to shoot 165.

The Burbank team of Sean McGinn and Ryan Labus combined to shoot 196, topping the Burroughs team of Brodie Kemp and Elijah Dowers, who shot 226.

The Burbank team of Alexis Sullivan and Madison Lee shot 205, topping Burroughs team of Sadie Demmert and Sofia Remelius, who shot 224.
The boys teams are back in action Thursday at DeBell in a Pacific League match.