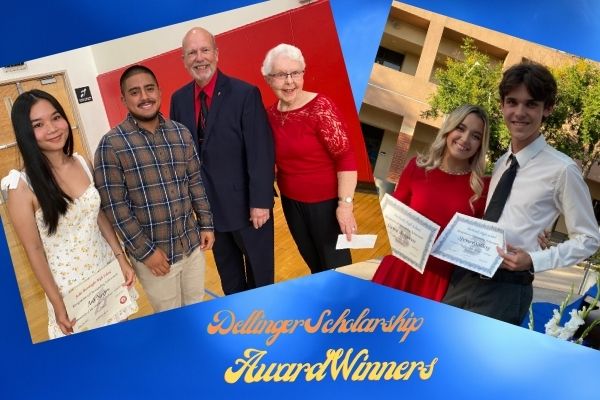 Carlos Rodriguez and Anh Nguyen from John Burroughs High School, and Sierra Brogmus and Spencer Solberg from Burbank High School, have each been awarded the Dellinger Scholarship for the 2022-2023 school year.

The Dellinger Scholarship honors Judith and Ernest Dellinger – beloved members of the Burbank community who have generously supported Burbank students, arts programs, and community activities, both during their careers and after their retirement. The “pay it forward” inspiration for the scholarship was a natural result of the acts of love and compassion modeled by the Dellingers over the years.

Before retiring in 2005, Mrs. Dellinger was a teacher at Emerson Elementary School and in the Burbank Unified School District for 36 years. She was known for always incorporating music, creativity, and kindness into the unique classroom environment she created.

In 2015, ten years after her retirement, as students from Mrs. Dellinger’s last class were about to graduate from high school, Mrs. Dellinger announced that she and Mr. Dellinger had set aside the funds to help each student from that class attend college.

This remarkable gift was yet another lesson for her students.

It led the students and their families to the idea of establishing the Dellinger Scholarship to assist hard-working Burbank Unified School District graduates who value education, demonstrate a high level of academic achievement, engage in community service, and emulate the Dellingers’ generous spirit.

This year’s recipients stood out for their hard work, determination, and dedication to serving their communities.

Carlos’s hard work, generosity, and drive to succeed shone through his application. His resiliency and his efforts to help his family and others, all while taking a rigorous course load, were impressive. He made a positive difference at Burroughs and in the greater community by inspiring his peers as a college mentor and academic tutor, and by serving as a leader of the Change Works Foundation supporting families dealing with pediatric cancer, and by working several jobs.

Anh also stood out with her strong commitment to serving cancer patients and her stellar academic achievements, taking 7-9 classes each semester of high school instead of the usual 6. She started a Cancer Relief Foundation and a club on campus, worked as an intern in a medical research lab, provided care packages and monetary support to families battling cancer, and found ways to give hope and spread compassion and kindness.

Sierra has been described as the “quintessential student/leader/athlete/performer”. In addition to hundreds of hours of dance, choir, and drama activities, she took rigorous courses and was involved in numerous clubs. Sierra’s involvement in raising funds to combat cancer, and teaching others, were among the many impressive gifts this hard-working student gave to the Burbank community and beyond.

Spencer is a student who we could see excelled in the classroom, all while spending more than 1,000 hours during his high school career giving to the community. A long time Boy Scout, he achieved the rank of Eagle Scout, participated in clubs, inspired others, and engaged in service activities that helped soldiers, children, and cancer patients.

Since its inception in 2017, the Dellinger Scholarship has been awarded to 12 students.

For more information about the scholarship: www.cfverdugos.org/dellinger-scholarship-fund/