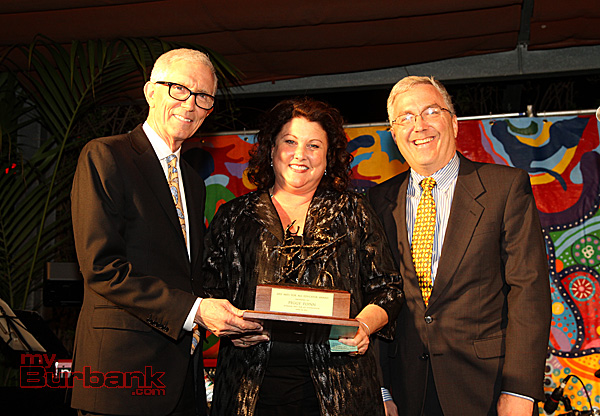 The Burbank Arts for All Foundation (BAFA) held its second “Party on the Plaza” Gala last Friday, celebrating a tremendous year of achievement and honoring Lisa Dyson, Peggy Flynn and Warren Stein/Deluxe Entertainment. And it was a work of art from start to finish, blending entertainment, inspiration, food and fundraising in pleasing proportions.

The weather sprites kept the evening dry and pleasant for the several hundred parents, teachers, school district educators and community leaders on hand to celebrate with BAFA. NBC4’s popular weathercaster Fritz Coleman served as the evening’s Master of Ceremonies, reminding his audience that BAFA has an importance well beyond its Burbank home. “The Burbank Arts for All Foundation has established a paradigm the rest of the country should pay attention to,” he stated.

And indeed, funding for public school education has been suffering “the death of a thousand cuts” within the State of California and, to varying degrees, throughout the entire country.  Public school art programs of all kinds have been among the first casualties of the budget axe, reducing many California public schools to a shadow of what they had been in the 1960’s, when California’s public school system, from kindergarten to university, was the envy of the entire nation and the world.

Faced with a funding crisis that showed no signs of getting better, Burbank residents and businesses opened their wallets, rolled up their sleeves, shared their own artistic gifts and kept the arts alive for Burbank’s school children.  Since its first meeting in 2006, BAFA has donated over $200,000 to Burbank school arts programs. Most recently, BAFA awarded $21,000 in new grants to support the arts education efforts throughout Burbank. And perhaps it’s no surprise that Burbank, the media arts capital of the world, would refuse to neglect the young artistic talents waiting to blossom within supportive schools.

But much more than money is driving BAFA’s quest to provide a top-of-the-line arts education program for every Burbank child.  The funding dollars are multiplied a hundred fold by passionate teachers, parents and corporate sponsors devoting countless hours of volunteer effort, as exemplified by BAFA’s 2013 honorees.

Lisa Dyson received the Champion of the Arts Award for her heroic volunteer efforts to keep arts education a priority in Burbank public schools. She began as the PTA Art Chair for Bret Harte Elementary School and was recently named Chair of BAFA’s Schools Outreach Committee. Thanks to her early coordinating efforts, Bret Harte students handcrafted Thanksgiving gifts for seniors and created personalized Valentine’s Day cards for soldiers overseas. Lisa went on to help principals and teachers obtain grants and matching funds from PTA’s and booster clubs. More recently, she’s been a major force in the arts programs at Luther Middle School. (Don’t believe her when she says she’s only played a “tiny part.”) The programs that Lisa helped grow at her schools are not only self-sustaining, they continue to reach new students each year.  She is “so proud to be a part of this amazing team” that puts in the hundreds of hours of extra time to keep arts education alive.

Peggy Flynn received the Arts for All Educator Award for her outstanding efforts in bringing arts educational resources, financial and in-kind partnerships to the Burbank Unified School District. Her teaching career began 22 years ago, following an earlier life in the design publication and entertainment industries. She’s developed several successful partnered arts programs with Woodbury University. Early on, BAFA recognized that they needed someone “charismatic, energetic and politically savvy” to pull together teachers, parents, politicians and administrators “to make it all happen.” And that’s Peggy. Los Angeles County recognizes her as a leading arts coordinator in the region. For her part, Peggy publicly thanked Burbank’s School Board for making “some very courageous decisions in very tough times.”

Warren Stein and Deluxe Entertainment, where he serves as the Chief Operating Officer, received the Patron of the Arts Award. As a company in the forefront of providing solutions and technologies for the global media and entertainment industries, Deluxe—one of BAFA’s Premiere Sponsors–knows the crucial importance of an arts education. Deluxe “sincerely hopes” that Burbank’s schools will be able to groom future Deluxe employees and company leaders. And Warren, who had earlier served as Deluxe’s Chief Financial Officer, knows a thing or two about marrying funding to exciting projects that rely on a superb arts education. Still, as a “Brit” obliged to quote Winston Churchill, Warren told the audience “my most brilliant achievement was persuading my wife to marry me.”  But it’s very clear that promoting arts education in Burbank has made Warren’s short list of very satisfying life accomplishments.

After a dinner of Asian delectables, Fritz conducted the event’s live auction. His hilarious cajolery coaxed more than a few dollars from formerly fat wallets, adding to the funds raised from the silent auction and special, one-time donations. He was definitely using his comedic powers for good, having honed them at the Comedy Store back in the early 1980s. “I was getting $45 a night back then,” he explained. “A Channel 4 executive in the audience offered me an opportunity to do vacation relief for the regular weathercasters. I said, ‘When do I start?’ Two years later [in 1984], I became the weekday weathercaster.” Nowadays, when he’s not describing yet another day in weather paradise, you might catch Fritz’ doing comedy at Flappers in Burbank as well as other comedy venues.

A highlight of the evening was a personal appearance from Dot-Marie Jones of Glee fame (also see myBurbank.com Profile), who recalled her school days in the small dairy community of Hilmar, California. “If you weren’t in sports, there wasn’t much to do,” she told the appreciative audience. She is thrilled that the Burbank community has taken the initiative to help schools provide arts education for their students. She started to fall in love with Burbank two years ago, when she co-hosted a show choir event at the Starlight Bowl. As she made her way down the hill and through Burbank, she noticed the town’s charm. Today, she’s a Burbank resident and loves the sense of community here.

As Mayor David Golonski has noted more than once, “it’s not the city it’s the community.” And architect and former Mayor Jef Van der Borght pointed out that “art is essential to being a successful architect.” Without an artistic touch to complement the scientific and engineering knowledge, “buildings become boring and bland.”

But guests at the BAFA gala had more than testimonials to convince them. The dazzling mural behind the stage turned out to be the work of Jefferson Elementary School students (to the delighted surprise of much of the audience).  Middle school students designed and restored a “Luthermobile”, a proud entrant in the recent Burbank On Parade. And the sculptured awards were courtesy of students from John Burroughs High School. (Want more examples? At the 5k Run For Life today, you could hear the Jordan Middle School Orchestra solid renditions, and a sixth grade girl’s beautiful, heartfelt The Star Spangled Banner.)

Biologists remind us how diversity makes the web of life stronger. Surely the social web will be stronger when each talent is allowed to add its strand. Burbank is well on its way to being the kind of special place where the dancer can dance, the painter can paint, the sculptor can sculpt and artists of all kinds can find their own special facet of  the good, the true and the beautiful.

Want to learn more? Contact Trena Pitchford, Director of Development, at 818.736.5269 or trena@burbankartsforall.org.