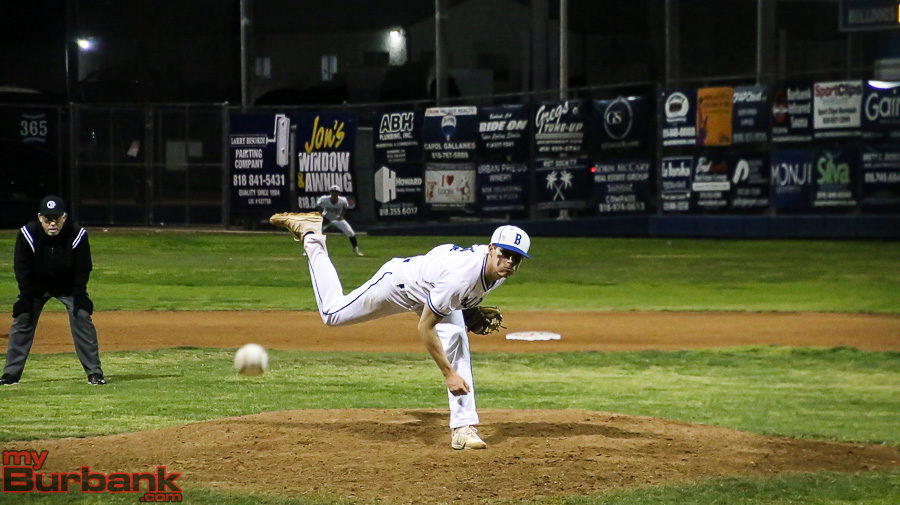 For the second time this week, the Burbank High baseball team faced a very good pitcher and for the second game the Bulldogs fell short.

Burbank managed just one hit against senior Dustin Allen on Friday night and lost 11-0 in a Pacific League match at home.

Senior Dominik Severo’s leadoff double to left center in the sixth inning was all Burbank could manage versus the hard-throwing left-hander, who struck out seven and didn’t issue a walk.

“After we take this, I feel like it’s better for us. It’s going to motivate us more to push through the season and come out with a win every single time we come out and play harder,” said Severo, the catcher. “I think they’re [Arcadia] some good competition, but they’re not better than us. So if we just bring it to every team we play, we can win this all.”

Junior Mikey Easter, who pitched one frame, replaced Allen and was able to strike out senior Aidan Gonzalez, looking.

Junior Ian Scheck then bounced back to Easter and then induced senior Oaklee Spens to ground out to third base.

“We just missed out on a couple of opportunities,” said Spens, the center fielder. “We just gotta get back to practice and fix it. I think we’ll come back tomorrow and have a team meeting and we’ll bounce back. We’re a good team.”

The final score looked lopsided, but the Bulldogs (3-4 and 0-2 in league) only trailed 1-0 in the second inning and 3-0 after five frames.

“Sports is a lot about having a short memory,” Burbank coach Bob Hart said. “You have to learn from your mistakes, but at the same time you have to turn the page. We’ll come back. We’ll practice hard. It’s next man up.”

The contest fell apart when the Apaches, who knocked off the Bulldogs 9-0 on Tuesday, tacked on five runs in the sixth inning and added a three-run seventh for a 11-0 lead.

King took the loss after toiling four innings, surrendering five hits and one run with four strike outs and two walks with a hit batter.

Arcadia (4-2 and 2-0 in league) pulled ahead 1-0 in the second inning when senior Justin Rios (four hits) slapped a one-out, run-scoring single to left field that plated junior Brandon Nguyen, who reached on an error.

Three frames later, the Apaches extended their advantage to 3-0 when they sent seven batters to the plate.

Sophomore Alex Dolan’s force out scored Easter, who walked and a run-tallying single to left field by Rios brought home Howey, who was safe on an infield hit.

The next inning put the game out of reach as Arcadia trotted nine hitters to the dish.

The key hit was a two-out, three-run double to deep left by Rios that made it 8-0.

Two batters earlier, junior Matthew McIntire walked with the bases loaded for a 4-0 edge and it became 5-0 when Dolan (three hits) was safe on an infield single.

A three-run seventh capped off the evening for the Apaches as nine batters went to the plate in an inning that featured two Burbank miscues.

Two of the three runs were scored on bases-loaded walks to Howey and pinch-hitter senior Sean Jackson.

Senior Jared Hunter entered the contest in the seventh inning for Arcadia as senior Adam Loera hit back to the box, junior Jaden Rez lined out to left field and senior Troy Lee fanned swinging to end the game.