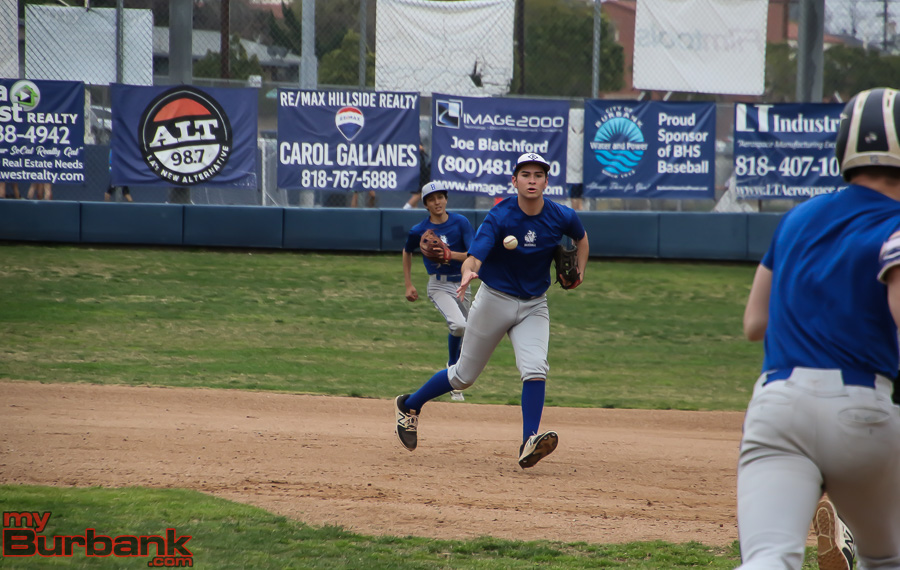 There are ways in which a team can play baseball such as hitting behind the runner, cutting off the throw from the outfield and situational hitting, that will please a coach.

Bob Hart, the longtime Burbank High skipper, is a fundamentalist, and despite a 4-3 Pacific League victory over host Glendale on Tuesday afternoon, wasn’t happy.

“We left way too many guys on base. We had a lot of mental errors. I was not pleased with our performance,” Hart said. “Always happy for a win, but how I critique our team, my coaching and the players, is the performance is of their level. I look at it a little differently.”

Hart’s team knows what to do, but at times didn’t against the Nitros.

“Situational hitting when we had runners on base,” he said of the occasional mental lapses. “Our approach didn’t change enough where we weren’t willing to shorten up our swings. Taking the same swings. Instead of the swings matching the count and the situation. A ground ball to second base gets the runner from second to third, but a fly ball, and you’ve got an out.”

Hart did like the manner his pitchers performed, including senior Andrew De La Torre, who earned the win after allowing three hits with six strikeouts and one walk over four innings.

“The pitching was solid,” Hart said of the three hurlers. “We played kick the can that one inning [fourth] and that never works to your benefit. But I think we underperformed, and that’s not taking anything from them [Glendale], because they’re much improved.”

Senior Joey Clark was effective after coming into the game in the bottom of the fifth and working two frames, surrendering one hit with one strikeout.

Sophomore Ryan King notched the save after toiling one inning, with two strikeouts and one hit yielded.

After neither team scored in the first, the Bulldogs (3-9-1 and 3-2 in the Pacific League) banged out three of their seven hits in the second inning while scoring two runs.

Junior Troy Lee began the stanza with a base hit up the middle and raced to second base when De La Torre reached on an infield hit.

Burbank’s lead swelled to 3-0 with a run in the third as Duarte’s sacrifice fly to right field brought in Lee, who singled to right field with one out, stole second base and went to third on an error.

The Nitros (6-8 and 0-5 in league) rallied and evened it at 3-3 with a three-run fourth as they sent eight batters to the plate against De La Torre.

Kataoka and Burke, who walked, both eventually came around to score on two miscues by the Bulldogs.

“If you’re asking me as a competitor, I want to win. If you’re asking me, am I satisfied with the result, no,” Glendale coach Marcus Whithorne said. “If you’re asking about the long-term approach and the long-view of this team, the fact that we were, after getting two and one in the three spot put up, to punch back, the next step is to be able to hold.”

Whithorne added: “We’re getting into a groove in the sense where we’re trying to eliminate the mental mistakes,” he pointed out. “We’re pitching to contact. We’re initiating action.”

De La Torre buzzed through the first inning without allowing a hit, getting Tichenor to bounce back to the box, striking out senior Darian Jenks looking and getting senior Nolan Wong to ground out to third base.

Another 1-2-3 inning followed as Kataoka grounded out to shortstop, Burke bounced out to second base, while senior Seth Harley fanned looking.

Senior Trent Lousararian singled to left to begin the third inning, however, Jenks and junior Ian Nord both fanned swinging and Lousararian was caught stealing.

Clark took over in the fifth inning and allowed a long leadoff single to left field by Nord, who was looking for a double, but was thrown out at second base by junior Aidan Gonzalez, who collected a single in the fourth inning for the Bulldogs.

Clark recorded a perfect sixth inning as Wong popped up to shortstop and Kataoka fanned, catcher to first base, while Burke flied to right field.

King worked the seventh inning and after getting Harley to bounce out to third base, Lousararian drilled a single to right center and went to second base on a passed ball.

Jenks came into the fray in the sixth inning, walked one batter, struck out one batter across one and one-third innings.