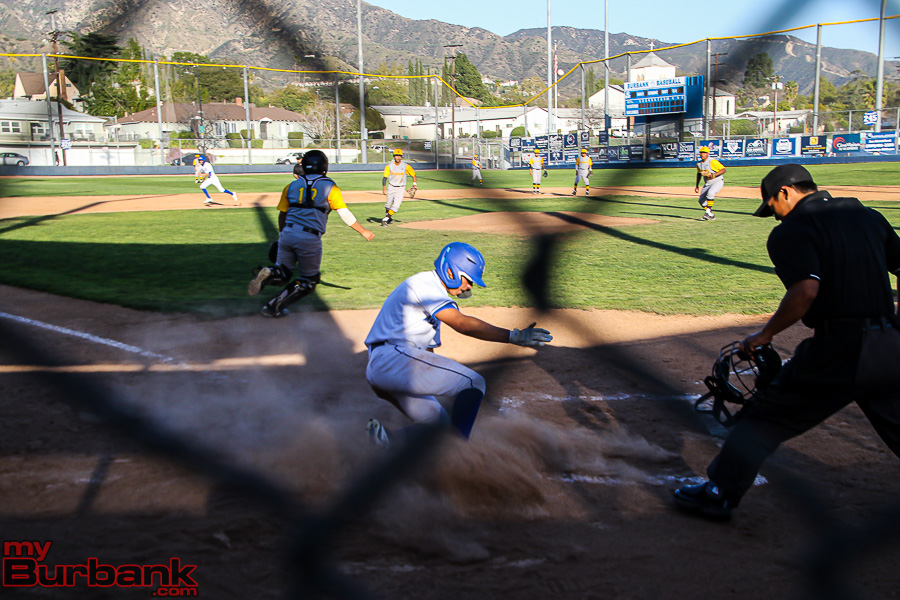 A potent and effective lefty-righty pitching combination was simply too good when the Burbank High baseball team faced visiting Kennedy on Tuesday afternoon in the final matchup of the prestigious Easton Tournament.

Josh Balos went five and two-third innings and Ryan King worked a flawless one and one-third in a 3-1 triumph over the Cougars.

“Solid pitching and no free passes. Put the ball in play and a little situational hitting. Good things happen,” Burbank coach Bob Hart said. “I liked my guys’ energy today and they were in the game and I liked it.”

The Bulldogs (3-2) scored all of their runs in the fifth inning as eight batters made their way to home plate.

Senior Troy Lee led off the fifth with a line-drive base hit to right field.

With one out, junior Ian Schenk drew a walk as Lee trotted to second base.

When senior Aidan Gonzalez walked, it filled the bases and after senior Tyler La Marsna reached base on a fielder’s choice, Lee scored the tying run.

Junior Andrew Wright replaced senior starter Jonathan Arrieta on the mound for the Cougars (3-2) and was greeted by senior Oaklee Spens lofting a deep fly ball to center field that plated Schenk and made it 2-1.

King then stepped up and laced a hard-hit smash that grazed the shortstop’s glove and found a home in left field for a 3-1 cushion as Gonzalez scored.

The only inning that Balos, who picked up the win, struggled was the fourth when Kennedy sent five hitters to the plate.

The key hit was a one-out double down the left-field line by senior Vince Esparza that scored junior Chris Hosegera, who was safe on an error as the Cougars led 1-0.

Balos then composed himself and was able to get junior Daniel Tovar on a fine defensive play by senior third baseman Jakob Duarte for the second out and senior Joel Castillo on a terrific scoop by junior first baseman Jaden Rez on Duarte’s throw for the third out.

“My approach out there was to attack every batter,” said Balos, whose best pitch is a changeup. “Throw them a lot of off-speed and keep them off their feet and attack, attack, attack.”

Balos began the second inning by getting Esparza to ground out to La Marsna, but allowed a single to center to Tovar, who promptly stole second base.

Balos then induced Castillo to fly out to Lee in right field and sophomore Alex Olvera to line out to Spens in center field.

Senior Tommy Mendoza opened the third frame against Balos by drilling a hard-hit ball at Rez, who made an excellent leaping grab.

Balos fanned junior Brandon Alfaro swinging and Tafolla grounded out to King at shortstop for the third out.

In the fifth inning, Balos surrendered a one-out bloop single to left center by Mendoza, who was later picked off and caught in a rundown. When Alfaro bounced out to Duarte, the inning came to an end.

Balos began the sixth inning by getting Tafolla to line out to Spens and getting Gonzalez to ground out to King.

Balos then walked Hosegera, which brought Hart to the mound, who then replaced Balos with King.

King was even better in the seventh inning as the power-throwing right-hander fanned Tovar and Castillo, both looking and secured the last out when Olvera looped a ball to short right field which Lee grabbed a gunned to Rez for the final out.

Duarte led off the second inning by lining a single to center field, but was left stranded. Spens opened the third by smacking a single to left and then swiping second base before moving to third on a grounder.