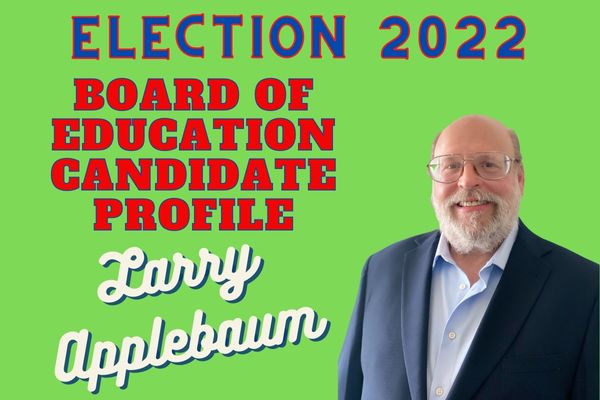 Burbank School Board candidate Larry Applebaum has been a resident since he was an infant, and although he loves traveling, Applebaum has always found himself making his way back to Burbank. He previously served as a BUSD Board of Education member from 2005 to 2017. Now, Applebaum says he is once again able to devote the time and effort necessary for a role with the board. Read on to learn about Applebaum’s appreciation of Burbank’s “small-town feel” and which local dining locations the self-proclaimed foodie loves most.

I have been a Burbank resident (almost) my whole life. Actually, my parents brought me to Burbank from Vista Del Mar Child and Family Services when I was six weeks old, as I was adopted as an infant.

I really like the small-town feel, even though we have over 100,000 residents. I have coined the phrase “Mayberry in a Megapolis” because you have access to elected officials and city staff that is unusual in a larger community. I have been fortunate to travel the world but love coming home to Burbank.

Being a foodie, I enjoy eating out a lot. I like a variety of food, so you can see me at restaurants such as Cafe Elegante, Octopus, Don Cuco, or BJ’s, as well as comfort food diners such as the Coral Cafe and Lancers. I love when a new restaurant opens and look forward to eating the food and meeting the staff and owners.

Out of high school, I went to USC, and while in pharmacy school I invested in a friend’s startup electronics repair business. I bought the business from him in 1984 (the same year I filled my last prescription) and built it into a premier electronic musical instrument repair facility for many years. A move to a larger facility in 1987 necessitated I learn the construction trade after being taken advantage of by a contractor who took on a project that was bigger than he could handle. I was befriended by another contractor who helped me complete the project in mid-1988. To help pay him back for his assistance, I ran his construction business out of the used space I had in my building. By 1991, I was running two successful ventures and earned my contractors license to boot.

I started giving back to the community by taking leadership positions in many organizations throughout the 1990s. When I met my future wife in 1994, I was on 12 boards, such as Valley Leadership Institute, San Fernando Valley Charitable Foundation, and Universal City North Hollywood Chamber of Commerce, to name a few. By the time I was married and my daughter Lauren was born, I had whittled my involvement down to a few groups and turned my focus back to my roots in Burbank. After looking at the schools, I found that there was a need to have itinerant teachers in the arts, music and physical education in the elementary grades, and after talking with many residents, I found they had many of the same concerns. This prompted my first, unsuccessful run for the board of education in 2003 and ultimately my election to the board in 2005. Among many accomplishments I can cite during my 12 years on the board, the passing of Measure S, the school bond issue that helped bring money to replace aging portable classrooms and adopt technology to help all our kids, is probably the most satisfying one. With my daughter now in college, I once again have the time, energy and commitment to help the children of Burbank benefit from my experience, leadership, and vision.

I earned my private pilot license in early 1990 and racked up several hundred hours over the next few years, even flying my future wife to Santa Barbara on our second date! I enjoyed the serenity of being in the sky but discontinued the hobby when my daughter was born. Interestingly enough, my daughter wants to learn to fly now, and I look forward to spending time flying with her as the pilot-in-command!