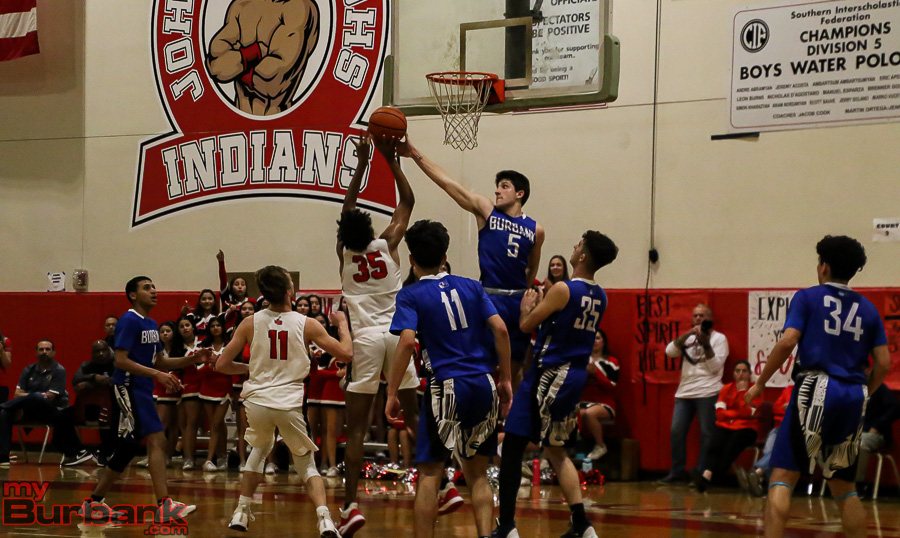 Ebbs and flows are a small part of basketball and it is just one aspect of the game that makes it so exciting.

In Thursday night’s Pacific League boys’ finale between Burroughs High and visiting Burbank, this was evident from the outset.

Trailing after the first quarter by three, the Bulldogs forged ahead by 12 points at the half, fell behind by one point heading to the fourth quarter and then rallied for a thrilling 46-42 victory.

In that final period, Burbank (9-18 and 5-9 in league) hammered in only four of 14 shots from the field and made two of three from the free-throw line.

But it was on the defensive end that Burbank shined, limiting the Indians, who are tied for third place in league with Muir, to one of seven from the floor and six points.

The Indians will qualify for the CIF Southern Section postseason and the pairings will be announced this weekend.

Senior center Kevin Sarkes tossed in four of his eight points in the fourth period.

“It’s my last game as a senior,” Sarkes said. “We have to come out and win it today. They beat us at our house. It was time for us to beat them at their house.”

Sarkes added: “In the first half, the offense was good and the defense was good,” he offered. “I feel like we picked it up defensively in the fourth quarter. We got stops. We got deflections, steals. We got big plays. It was great.”

Sarkes was asked if beating Burroughs is extra sweet. “Definitely,” he said of the triumph over city rival. “You have a bigger crowd. The gym is loud. You have to take it up another level, another notch.”

The Indians (19-9 and 7-7 in league) leaped ahead 10-7 heading into the second quarter as senior shooting guard Carson Cardenaz, who scored 11 points, tallied a hoop and a three-pointer.

After scoring two points in the first frame, center Corwin Smith added a bucket and a free throw in the second quarter for the Indians, who converted 17 of 54 for 31.4 percent on the night.

Burroughs shot 25 percent from the field in the opening half after making eight of 32.

Smith dropped in five points in the third quarter and senior forward Emery Goulet tacked on six of his eight points.

Smith was the only Burroughs player to score in the fourth frame after tallying six points.

In the third quarter, the Bulldogs, who drilled 18 of 53 for 33.9 percent, managed only four points with sophomore point guard Phoenix Mosley scoring two and Avetisyan also dropping in two and fell behind 36-35.

Junior shooting guard Elmer Reyes scored two points in the third quarter after dropping in eight at the intermission that included a pair of three pointers in the second quarter and finished with 12 points for the Bulldogs.

Guard Blake Ballard knocked in seven points that included a three-pointer in the first quarter for the Indians.