Burbank Coach Jerry DeLaurie was given the keys to his new ride back on August 28. He was so excited he couldn’t wait to see what was now his. When he first saw his new product, DeLaurie was met with shock and awe. There was no engine or any valuable parts to start the motor. Instead of running for the hills of Burbank, DeLaurie embraced the challenge to assemble his newest gem. 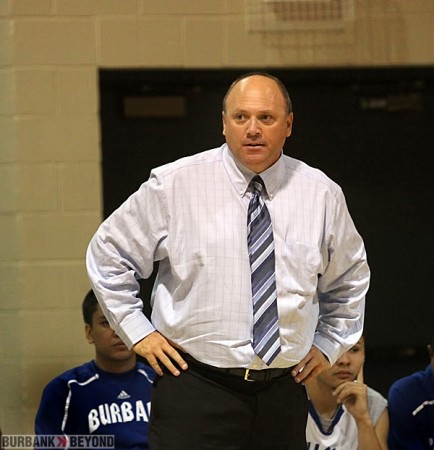 What kind of car you might be asking? We’re not. We are talking about the Burbank High School boys’ basketball program. When former coach Jose Hernandez left to pursue other opportunities, DeLaurie applied and was offered the job to take over the program. What he didn’t realize at the time was that the cupboard was bare.

Eleven seniors from last year’s team had graduated. Others left for various reasons. Not one varsity player had returned. DeLaurie realized the situation and hasn’t looked back with any trepidation. He is building his program from scratch. And that’s just fine with him.

“It’s been a big transition for the boys. More like a transformation. It’s been a roller coaster,” DeLaurie explained. “Having tryouts in the middle of September and playing a few games in the fall. And on top of that, nobody has any varsity experience. Fall league and summer is one thing; playing in the season is way different.”

DeLaurie went right to work and has done a magnificent job thus far. Nine underclassmen comprise the heart of the team including several junior varsity players from a team that went 27-3 last season. In the short amount of time at Burbank, DeLaurie has built the Bulldogs into a team that believes can win immediately.

“We’ve come a long way. I’m pretty happy with that,” DeLaurie said. “We are still getting acclimated. We are behind but handling adversity in the right way. But we have good kids. The future is looking bright and we have high expectations. I’m really proud to be here.”

Burbank took third place at the recent Burbank Tournament. The Bulldogs went 2-2 and lost two hotly contested games to Agoura and Canyon. Trailing by 19 to Agoura in the third quarter, BHS rallied to tie the game only to lose at the buzzer, 62-60. The following night Burbank pushed Canyon, the 2012 Foothill League champion, to the limit only to fall, 52-42. 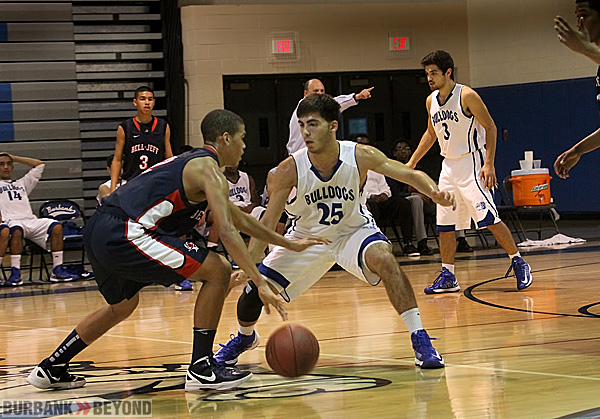 The Bulldogs are led by 6’0” junior Richard Elmoyan, who plays guard, forward and center. DeLaurie is high on his captain; not only on the court but off of it as well.

“He’s a great kid. A class act. He’s our best player and just a great person,” DeLaurie said. “If he stays healthy, he can be a first-teamer in league for sure.”

Joining Elmoyan is senior guard Sarkis Karian who DeLaurie describes as a “success story.” Karian poured in 29 points in his first varsity game against Agoura.

“He can get to the basket very easily,” DeLaurie stated. “Those two are exceptional players who we have. It will be exciting to see these two kids play. For us to be competitive, they will have big games.” 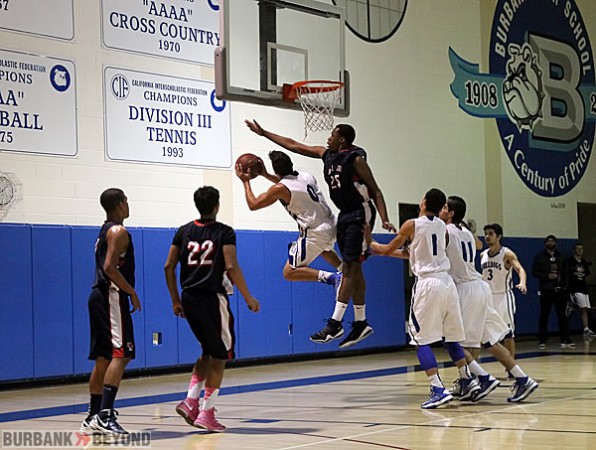 Greg Salas goes in for a shot against Bell Jeff (Photo by Ross A. Benson)

Seniors Greg Salas and Andy Yanikyan bring toughness and versatility to a squad that will make up for inexperience with passion and determination.

Newcomer Quentan Bright, a six-foot-two promising guard who transferred in from St. John Bosco, rounds out a group of players that will look to keep Burbank in the thick of the league race.

“We will push the ball up and down the court with some of our athletic kids,” said DeLaurie, who is in his seventh year as a physical education teacher at David Starr Jordan Middle School. “We will trap and press and keep it the same from the past years here. We will work hard and come after you. When you play Burbank, you will know that these guys are getting after it.”

Burbank will head south to the Sweetwater Invitational in San Diego, December 15 – 22.

“It will be nice for our kids to spend some together and bond,” DeLaurie said. “We have just been going full speed since day one. We need time to be with each other and become a team.” 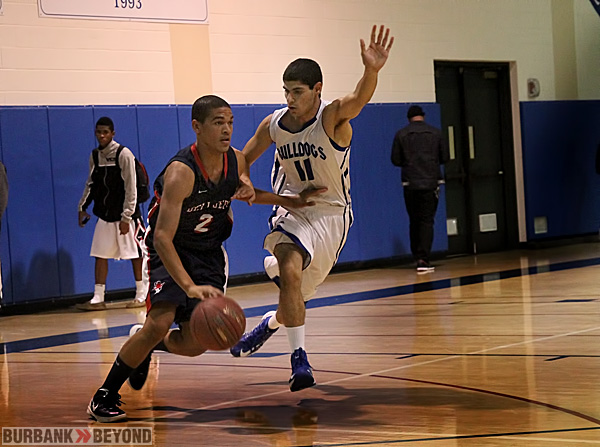 The Bulldogs will then participate in the Hart Holiday Classic after Christmas from Dec. 26 – 29. Pacific League action begins Jan. 4 at 7 p.m. vs. Arcadia at BHS.

“I’m excited, I’m happy and having fun. We can compete and we will be very competitive during league,” DeLaurie said. “We want to build a solid foundation by being consistent in our coaching, how we play, how we act and instilling character, pride and accountability. If we do that, good things will happen. The sky is the limit.”

The keys to the Burbank program are in fine hands. After all, he didn’t inherit an old jalopy. With a name like DeLaurie, maybe a DeLorean will be built in time.