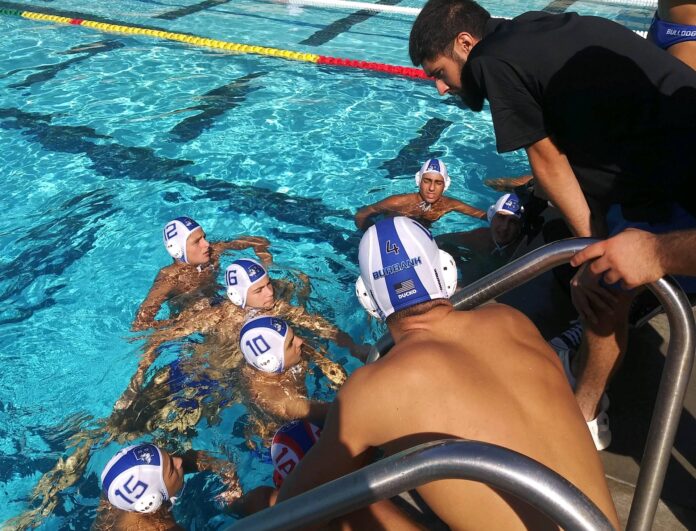 Burbank received a match-high five goals from Gevorg Choginyan and four apiece from Zach Gezalyan and Eric Avetisyan to cruise to a lopsided 22-3 nonleague road victory versus South Pasadena on Wednesday.

“We’ve got a lot to offer with having a deep lineup and a really good bench,” said Arakelyan, who guided Burbank to the Pacific League championship and an appearance in the CIF Southern Section Division VI championship match last season and helped Burroughs win the 2016 Division V crown as a player. “It’s not just your normal three or four guys, but having everybody being a part of it. Last year, we had two or three guys, so now we have a lot of people who we can turn to.

“It was great to get to the championship match last year. We can build off that. There’s a lot of opportunity here for these guys to develop and contribute. You look at guys like Zack and Gevorg and they are our two fastest swimmers and they can help us off the counter-attacks.”

Burbank (12-2) jumped out to a 9-1 lead after the first quarter and scored 16 goals in a row to turn aside South Pasadena (1-2). The Tigers won the Rio Hondo League title last season.

Gezalyan, a senior driver, scored his second goal of the first quarter to give the Bulldogs a 3-0 lead with 5:36 remaining.

“It’s big to come out early in the game and score some goals,” Gezalyan said. “I think we did a good job spreading out on offense and it put us in a good position.

“I think after winning league and going to the championship game last year, our guys have a lot more experience and confidence.”

Choginyan, a sophomore who transferred from Glendale High in the summer, completed his hat trick with 53 seconds remaining in the first quarter to extend the Burbank lead to 9-1.

Choginyan said he’s eager to see how the Bulldogs compete in league before another likely trip to the playoffs.

“I saw them last year,” Choginyan said. “So far this year, we have a lot of people who can contribute. I think we can compete at the same level.”

Burbank, which had previously won a league title in 1969, received second-quarter goals from Gezalyan, Alex Kobalyan and Choginyan to build a 12-1 lead. Choginyan’s goal came as time expired in the first half.

Burbank, which went 22-3 and 8-0 in league last season, tallied six goals in the third quarter to extend its advantage to 18-1. Avetisyan paved the way in the quarter with two goals, including a man-advantage goal to make it 13-1 with 6:42 to go.

The Bulldogs received also received two goals from Andy Gezalyan and Michael Misakyan and Jack Babelyan and one each from Hayk Atanasyan and Rafael Gevorgyan.