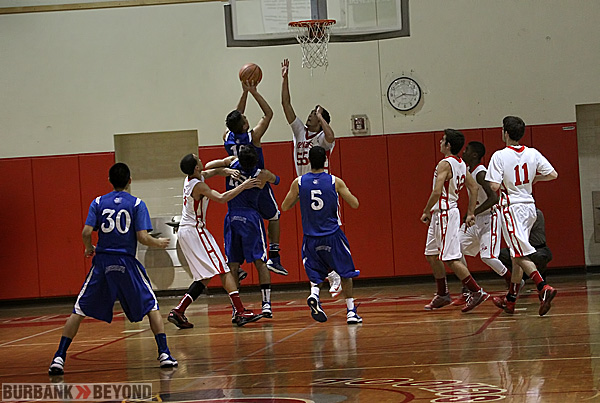 In one quick swish of the hoop, summer basketball ended for Burbank and Burroughs last week. August has arrived and with that a well-deserved rest for each team that spent the last two months practicing, competing and preparing for the future.

Both teams experienced heavy losses due to graduation and the process of rebuilding began in early June. Burbank (16-13 in 2012-13) and Burroughs (15-12) made the most of their summers exploring new lineups, evaluating young talent and trying to get a feel for what their squads will look like in the winter. The Bulldogs and Indians played in the Burbank Summer League each Tuesday and Thursday as well as competed in various tournaments.

Here is a review of both teams’ summer endeavors as well as some thoughts from their head coaches.

The Bulldogs graduated seniors Sarkis Karium, Greg Salas, Andy Yanikyan, Brian Pasco and Peter Wongsasitorn from a squad that overachieved and surprised many in Coach Jerry DeLaurie’s first-year at the helm. Burbank earned an automatic qualifying berth into the postseason where it advanced to the second round before succumbing to eventual CIF Champion and Division one State runner-up Santa Monica.

During the summer, Burbank went 2-1 in the SCIBCA tournament, 3-1 in the Corona del Mar shoot-out, 1-2 at the LA Watts summer games and 3-3 at the San Diego State team camp. Most importantly, BHS defended its home court and won the Burbank Summer Tournament going undefeated (3-0) and defeating Grant, 62-55, in the championship.

Incoming freshman Mike Woods caught the eye of DeLaurie and could be a major impact player during the regular season. DeLaurie credited Woods and Bosman as the team’s two most improved players for the summer.

Coach DeLaurie’s thoughts on the summer-

“It’s been a transition summer for the returning players. There is a lot more organization, structure and accountability. That has been new for them. Lower levels have been great. But for our varsity it’s been a struggle.”

“We’ve had some really young kids step up and play well for us. The upperclassmen need to play harder. As a team, we need to be more mentally tough. We struggled with that a little bit this summer. I’m not measuring wins and losses during the summer. I’m measuring the toughness we have.”

“One thing we did well is play good competition. We played some really good teams and I was happy with that. I’m looking for consistency and how hard they play on the court. That’s been a concern for me. We haven’t been playing hard as we should at times. It’s time for our experienced guys to get after it. I’m always looking for character, integrity, pride, responsibility and passion with my upperclassmen.”

“The sky is the limit for Mike Woods. He has unlimited potential. He’s been a bright spot this summer. At times he’s been our second best player. It’s going to be special here in a couple of years. We got two freshmen and a sophomore playing varsity right now. They are competing and that’s a big plus.”

The Indians graduated the talented Lawrence White and a host of other solid players: Jorge Flores-Pere, Kalen Verhoeven, Austyn Dries, Hanoak Amanios and Kyle Roberts. With a decent amount of size having left, JBHS used the summer to implement more full court pressure while emphasizing the outside shooting touch of its guards.

Burroughs went 3-1 in the Glendale College tournament and 2-5 combined in the Hart and Bash in Burbank tournaments that were held simultaneously the same week. They also competed in the Maranatha summer league as well as in the Burbank summer league.

Two players who shined brightly during the summer according to Coach Adam Hochberg were Steven Hubbell and Steven Sanchez. Hubbell, a sophomore, and Sanchez, a junior, led the guards with their playmaking ability and consistent outside shooting. Returners John Cutone, a senior, and junior Chris Hovasapian will be expected to make a large impact when the season rolls around.

Coach Hochberg’s thoughts on the summer-

“Summer basketball is a game of whether you can be consistent in what you are trying to do in developing your guys. We have been consistently inconsistent. We’ve been up and down. It’s been a matter of staying consistent with our effort when we are not making shots.”

“We have a group that plays extremely hard. They have a passion for the game which is what I’m really going to enjoy. We are really inexperienced and we have the inability right now to accept pressure that is brought to them. Yet when we pressure ourselves we are pretty good.”

“We move the ball extremely well. They play well together. We have a ton of shooters. I can put five guys on the floor that can make a three at any one time.”

“I’ve been telling them no matter what to get after it and always compete. We want to be relentless in all that we do. We call it CARE: communication, accountability, relentless, enthusiasm. If they stick with that, then I think we will be competitive.”