Both Burbank and Burroughs Highs have lost some key athletes to graduation, but that shouldn’t play a key role in the success of both schools this season.
The Bulldogs appear to be strong as a dual meet squad and the Indians appear to have found their next pole vault star.

Burbank
The Bulldogs won the boys’ league dual meet title last year and are hoping to duplicate the feat.
“That’s what we’re shooting for,” said David Card, who took over as head coach after serving as an assistant to longtime head coach Darin Wolf. 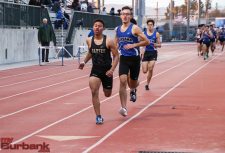 Burbank has a strong group of sprinters and distance runners that could go deep into postseason competition.
The spring group is led by junior Bryan David, a 400 meter specialist, who ran under 51 seconds last season. Freshman Jack Sapyta is one of the best sprinters to ever come through Burbank. He ran the 200 meters in 22.73 seconds last year with the Burbank Vikings.
Junior Cole Le’au is also back. The Bulldogs have picked up a transfer in Kendall Fauntleroy, who will become eligible in late March. Sophomore Dylan Branden is another sprinter to watch for.

The distance running group is led by sophomore Andres Leon and junior Victor Goli. They are supported by a host of others.
Senior Zion Chavez will be counted on to provide points in the long and triple jumps as well as in the pole vault. James Symth is the defending league champion in the discus and will provide some key points in the throwing events.
Sophomore Marcus Halm is solid in the jumping events and the hurdles. 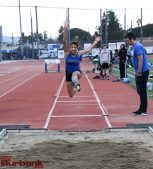 On the girls’ team, Burbank appears to be in a position to compete for a league title.
“We have the depth and quality to challenge Arcadia,” Card said.
Sophomore sprinter Stephana Powell is a transfer from Van Nuys High and should be solid in the 200 and 400 meter events.
Sophomore Jayla Flowers could be on the best Burbank has ever had in both the sprints and in the long and triple jumps.
The distance running crew is very deep and led by senior Shalom Mejia and junior Sol Fernandez.
Sophomore Tamryn Betts is the returning league champion in the high jump.
Freshman Emma Cusumano has the potential to be a star like her older sister, Haleigh, who graduated from Burbank in 2017.

The Indians are not as deep as in the past, but still have a few elite individuals.
Sophomore Eli Gault-Crabb could be the next in a long line of pole vault stars.
He opened the season against Canyon High by clearing 14 feet, 2 inches.
Junior Caleb Black is an elite 400 runner for coach Levon Davis.
“Caleb, if he’s healthy, he might go 48,” Davis said.
Senior Raymond Berrellez along with junior Logan Berger and sophomore Jimmy Nealis give Burroughs a solid distance running group.

The Burroughs girls’ team is led by senior sprinter Jada Martinez-Reese.
Sophomore Elizabeth Surratt could have a breakout season in the 300 intermediate hurdles after going 47.57 in league finals last year.
Burroughs will rely on a solid core of a distance runners to get the bulk of their scoring from.
Sophomore Jordan Guzman, senior Lakely Nealis and freshmen Sophia Navarro and Kimberly Ramirez should make significant impacts.

Burbank Football Roughed Up by Serrano