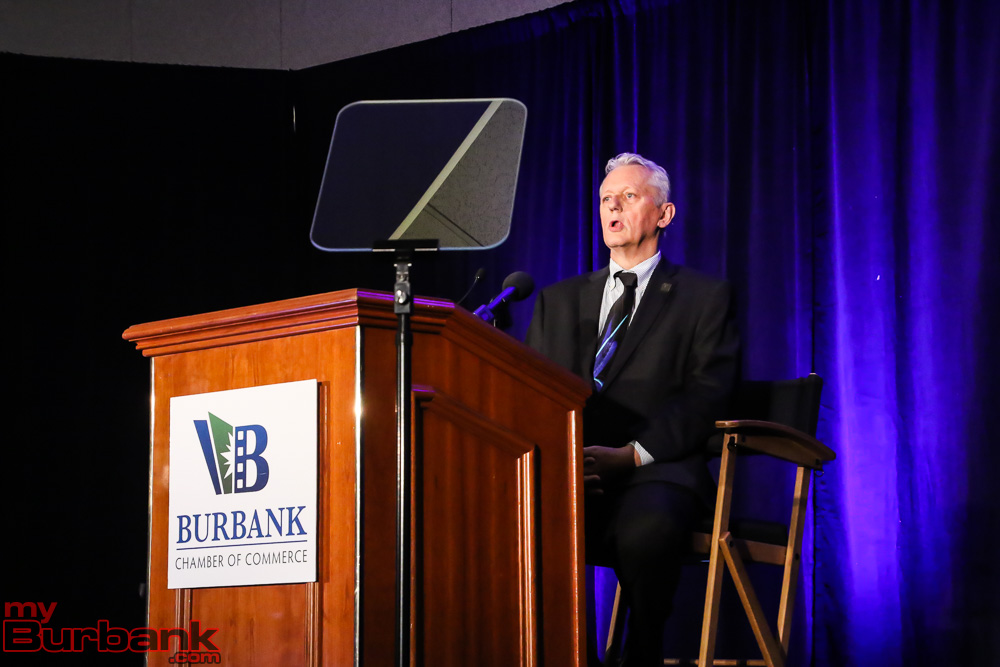 On Wednesday, October 25th, the Burbank Chamber of Commerce hosted the State of the City. City council was present at the event, along with Mayor Will Rogers. The event was the largest of its kind, with over 520 people in attendance.

The event discussed Burbank’s accomplishments through the last few decades, with a focus on the accomplishments made within this last year. While speaking, Mayor Will Rogers described Burbank as a “city of dreamers.” Today, Burbank is called home by 12,400 creative businesses, 33,430 creative employees, and 152,600 in the workforce population.

Mayor Rogers also highlighted Hollywood-Burbank Aiport’s new terminal, the Burbank Pass program, and the recently approved First Street Village Mixed-Use Project. With new developments, and new businesses on the way, the city of Burbank is set to retain the title of “Media Capital of the World.”

Continuing with his speech, Mayor Rogers insisted at Burbank’s healthcare sector is “robust” and that the state of our economy is “strong.”

After the event, I asked Mayor Rogers for an update on the incoming budget deficit. Mayor Rogers explained that “the deficit we’re facing is not from overspending or anything of that kind, it’s coming out of the middle of the 1990’s. There are, I think, two, possibly three, much less painful alternatives to making any cuts. We have not done a good job at making those alternatives public…we’ve talked about them but have not given them nearly as much attention.”

Mayor Rogers went on to say that “ultimately, it’s going to be the people making the choice” in regards to how the budget deficit solution will play out. However, Mayor Rogers noted that the people in Burbank will have all of the options available and that the community will pick one or two solutions when the time comes. Mayor Rogers also assured that none of the solutions involve closing parks, youth sports, libraries, or anything that he described as a “dystopic future” during the first budget meeting.

If you’re interested, below are some of the new businesses opening in Burbank in the very near future:

Also highlighted at the State of the City address was the approved development projects going on within the city. Starting at the Burbank Town Center, the recent upgrades and continuing construction, which is set to be completed by late 2017, is adding 40,000 sq. ft. of new retail space. In total, the renovation cost $60 million dollars.

Next is the Talaria at Burbank. This development is listed as a mixed-use project. This site will play host to a 43,000 sq. ft. Whole Foods and 241 apartment units. Its completion is set for early 2018.

The Screenland Drive project is also listed as a mixed-use project with 3,730 sq. ft. retail/restaurant space and 40 apartments.

As mentioned previously, the First Street Village is set to have 18,967 sq. ft. of retail space and 275 apartment units.

Below are some of the proposed development projects: