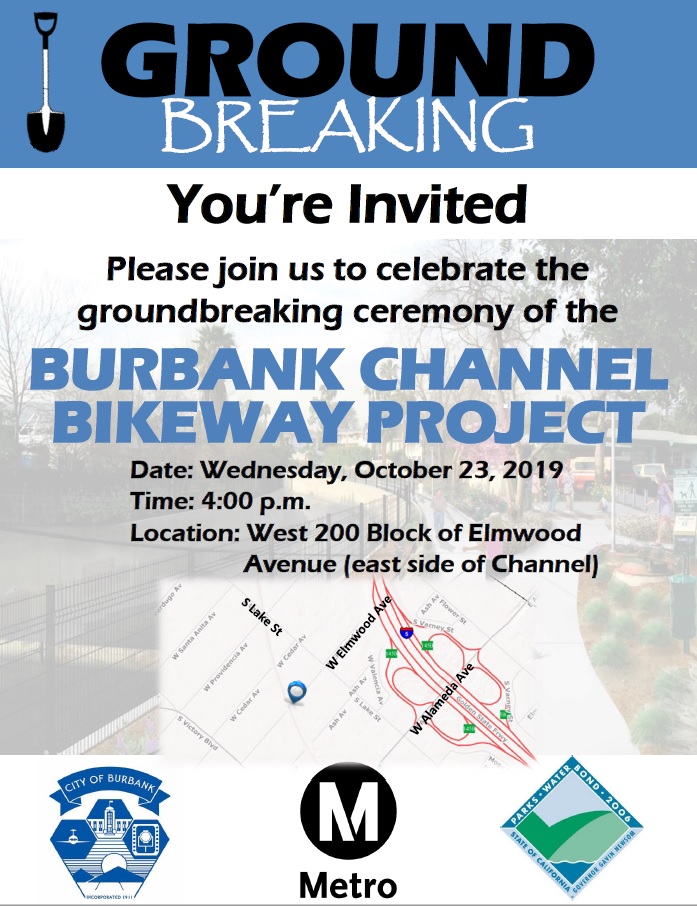 The City of Burbank invites you to attend the Burbank Channel Bikeway Project Groundbreaking Ceremony at the 200 West block of Elmwood Avenue (eastside of the Channel) on October 23, 2019, beginning at 4:00 P.M.

The Burbank Channel Bikeway Project is a 0.79-mile off-street bike and pedestrian path that will be located directly adjacent to the Burbank Western Channel. The 12-foot wide path will begin at the Downtown Burbank Metrolink Station and proceed south to Alameda Avenue.

The Project, when completed, will create a bike path that begins at Chatsworth and ends 50 miles away at Long Beach. It will beautify the Channel while providing a safe off-street facility for bicycle riders and pedestrians. It also builds better neighborhoods by providing recreational amenities that encourages active living while improving the aesthetics of the Channel area. Improvements at the Channel Bikeway close an important gap that will allow cyclists to seamlessly travel from Downtown Los Angeles in a separate and protected off-street facility.

The Project is the result of a 2009 Metro Call for Projects grant, and Urban Greening for Sustainable Communities Program grant that was awarded in 2012, as well as the new award of Measure M Multi-Year Subregional Program funding.