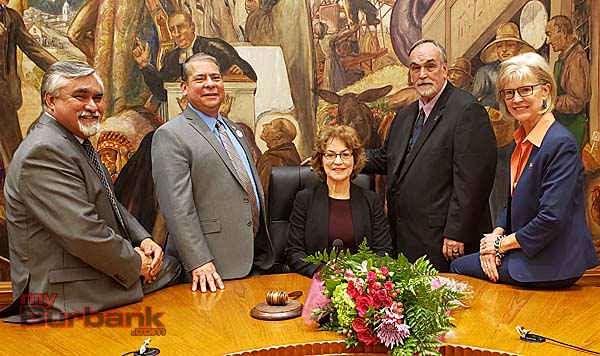 What had been a May tradition is now becoming a new December tradition as the Burbank City Council held their reorganization meeting Monday, December 16 in the Council Chambers at City Hall.

Vice mayor Sharon Springer was selected by her fellow council members to serve as Mayor for the next year with Council Member Bob Frutos tabbed as the Vice Mayor.

The one year term is mostly a ceremonial position that is rotated every year by a vote of the council members. All five council members are elected by the public to serve four year terms. While the Mayor has no real power over other council members, she will chair the meetings as well as appear at many events to represent the City.

According to press release issued by the City, Springer worked as a commercial real estate appraiser and earned the Member of Appraisal Institute (MAI) designation. She later started her own business and developed and marketed five patents that she designed. She also worked in nonprofit administration establishing programs in senior communities. She earned a B.S. in Geography and a M.S. Degree in City and Regional Planning.

She is a Certified Master Gardener with the University of California Cooperative Extension and is at the Burbank Farmers Market the first Saturday of every month with other Master Gardeners helping residents grow fruits and vegetables.