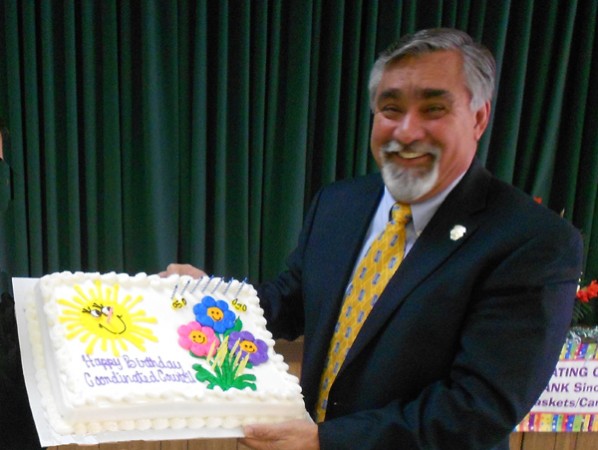 The regular monthly meeting today of the Burbank Coordinating Council took on a festive air, as the organization celebrated its 79th Anniversary.

Burbank Coordinating Council (BCC) began in 1933, when representatives from various civic organizations and churches in the community decided it would be a good idea to get together and compare notes.  Besides making sure everyone didn’t schedule their group’s events on the same day, the BCC was able to channel the efforts of the various member organizations so that they could do the most good for the community.

At today’s meeting and celebration, BCC President Janet Diel introduced Burbank Mayor Jess Talamantes, who gave those in attendance an update on nearly all the important developments in our city.  Although none of those original founding members of BCC are around today, some of the members today have been active with the organization for years and years. 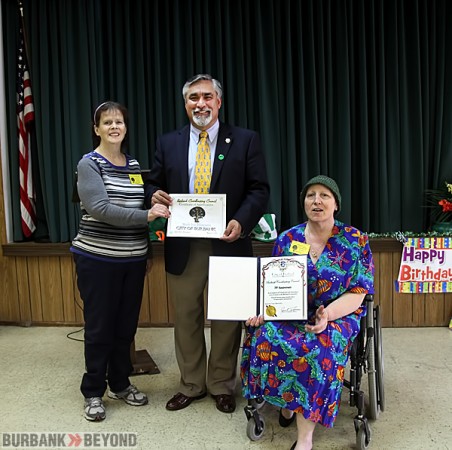 The "Official Exchange of Certifcates"' Eileen Cobos, on left, presents Mayor Jess Talamantes with a certifacate as he presents Janet Diel a City Council proclamation honoring the Coorinating Councils 79th Birthday. (Photo by Ross A. Benson)

Officiating for the official signing of “Happy Birthday” was also one of the mayor’s duties at the meeting.  With that many candles on the cake, it was a good thing Assistant Fire Chief Tom Lenahan was also in attendance at the meeting that was held in the social hall at the Little White Chapel Christian Church.

The mayor touched on the BCC’s role, along with the Burbank Ministerial Association, in creating the Burbank Temporary Aid Center back in 1974.  He had praises for their good work today, which includes the Holiday Basket program that saw over 500 less-fortunate families receive food and presents at Christmastime.

“The Coordinating Council does a great thing.  It’s a service the community needs,” said the Talamantes, adding, “Its members share results and solutions.”

That cooperative spirit is a cornerstone of the BCC’s success for 79 years.  At the meeting members representing various organizations in Burbank let everyone there know what their group was doing.  The Burbank Civitan Club is having a St. Patrick’s Day Champagne Brunch at the Cataway on March 11.   The Burbank Tournament of Roses Association will be holding their annual banquet.  On April 17, the Burbank Human Relations Council will hold a Community Commemoration of the Holocaust.  Burbank On Parade is coming up on April 14, and the BCC will have an entry. 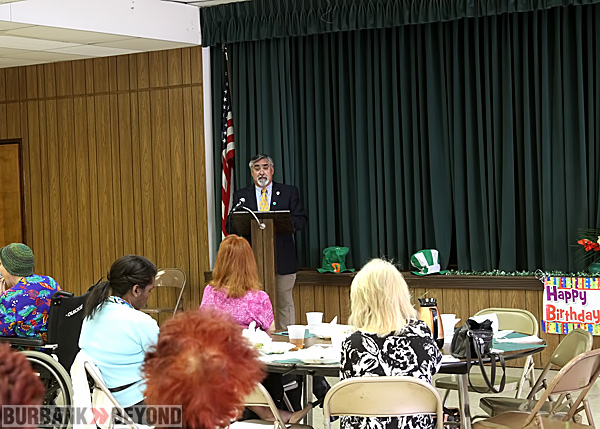 Through the mayor’s remarks, those in attendance got an update on what the City of Burbank is doing in number of areas.  Talamantes, a retired Burbank firefighter, talked about extensions to the City ordinance requiring wood shingle roofs to be removed, giving homeowners an addition 2 – 8 years to put on replacement composition roofs.

Talamantes spoke about how the new Memorial Field at Burroughs High looks great.  He told the gathering how participating in the dedication ceremony as mayor was even more special for him personally, since he played football on the field , and ran on the track when he was a student at Burroughs.

Although developments in Burbank are pretty upbeat, the mayor did address the impact to the City’s budget that the loss of redevelopment is causing.   “Redevelopment has been very good for Bubank”, said Talamantes, “Unfortunately some other cities took advantage of it and spoiled it (redevelopment) for all.”

With the unseasonably hot weather the past couple of days, the mayor noted that the Verdugo Pool will re-open — but not until the summer of 2013.

The economy may still be bad, and gasoline prices are going sky-high, but new businesses are coming to Burbank.  Talamantes noted that a new Gap Outlet store is opening where Crown Books used to be on San Fernando Blvd.  And just a few blocks to the south, Story’s Tavern is going into the building that housed Story’s Hardware.  Talamantes noted that Thomas Story, who owned the hardware store, was Burbank first mayor.

He added that two major enterprises, KCET and DC Comics, were both moving their offices to the Pointe on Alameda Ave. next to Providence St. Joseph Medical Center.

The meeting ended with an appeal for help with the BCC’s other major project, Summer Camperships.  Each year the BCC provides camping experiences for underprivileged kids between the ages of 8 and 18.  Last summer the organization was able to provide either day camp, or resident camp experiences at accredited camps for 55 Burbank children.  They want to do more this summer — lots more.

Their goal is to be able to offer all the children whose families received Holiday Baskets, a chance to go to camp.  That would be 2,000 camperships.  However, the basket program depleted the organizations treasury. So they are seeking donations.  You can call (818) 843-3699, (818) 216-9377, or email BCCcamperships@aol.com.  Donations are tax deductible.