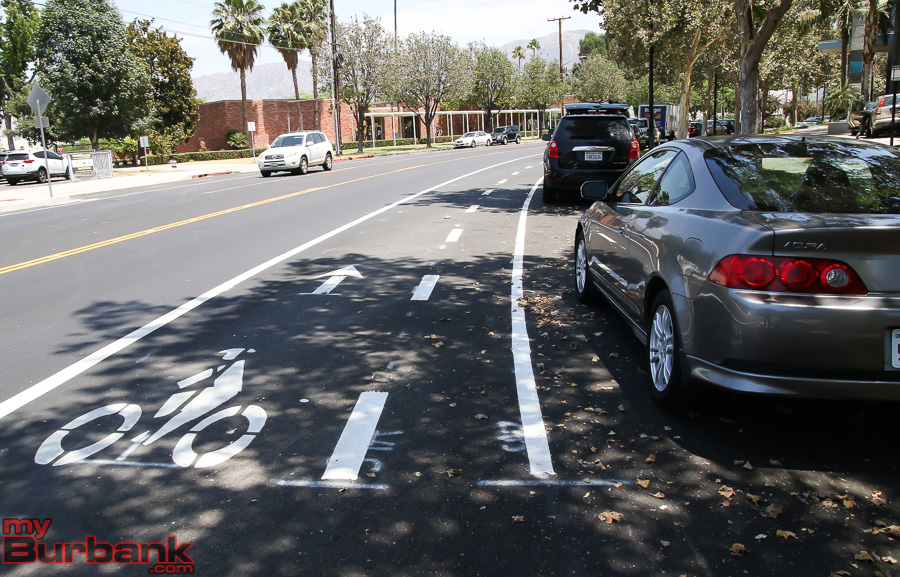 The City of Burbank has painted a new bike lane to protect cyclists from parked car doors opening in front of them, potentially causing cyclists to collide with the doors.

The buffer lanes, as they are called, are painted along the inside of the existing bicycle lane and are several inches apart which is the width of an open car door.  The lane is meant to provide more safety and separation between cyclists and parked cars.  They will help bicyclists to avoid contact with car doors opening and closing and will also direct cars to park as close to the curb as possible.

Assistant Community Development Director for Transportation David Kriske said, “This is something traffic engineering and transportation planning have been working on for the last several years to make the standard bike lanes that have been out there for a long time safer.”

The city is looking to put new buffer lanes in downtown on 1st Street between Magnolia Street and Verdugo Avenue.

“We felt it was necessary to help folks traveling from downtown over to Verdugo Avenue and then around to the Metrolink station,” Kriske said.

Not everyone feels it will solve bike safety problems.

Mike Hollis, the chairperson of Walk, Bike Burbank an organization for cyclist said, “I think that it’s a small step forward.  I see more problems with drivers drifting into the bike lane or wanting to get to the right-hand turn lane and taking the bike lane to do that.”

Hollis prefers to see more bollards separating the bike lanes from cars in the travel lanes.  A bollard is a  short post attached to the ground, often plastic, that creates a barrier between cars and cyclists.

Hollis said, “That’s why a protected lane with bollards is going to be more effective.  People will drive right over through a white stripe on the road anytime they feel like it or while they are distracted while driving.”

So far cyclists seem happy with the new lanes.

“Anecdotally it is safer, more space for them to ride.  It puts them farther away from the parked cars which are good.  So I think the initial feedback has been positive, and I think they are working well,” Kriske said.

“All of us want to get to our destination safely whether driving, bicycling or walking,” Hollis said. “We all have a right to our city streets and infrastructure, and that means that we all have to work together to make this safe for everyone not just for one particular portion of those who use the road.”