A local crossing guard has received an outpouring of support from the community after suffering from a devastating ordeal.

On Thursday, February, 13, a house fire started in George Contreras’ Burbank home, burning all of his belongings and destroying the house in the process. Contreras has two dogs, and while one was in the backyard and stayed safe, the other dog was tragically unable to escape and perished inside the house.

Contreras was taking a bath at the time the fire started and had to make a quick choice of escaping through a window in spite of wanting to try to go back in to save his dog.

“I knew if I ran back in there, I wasn’t coming out,” Contreras said. “[I thought], ‘I know I’m not gonna make it.’ If it’s that thick I won’t be able to see anything and I didn’t know where she was. I had to make a split second decision.” 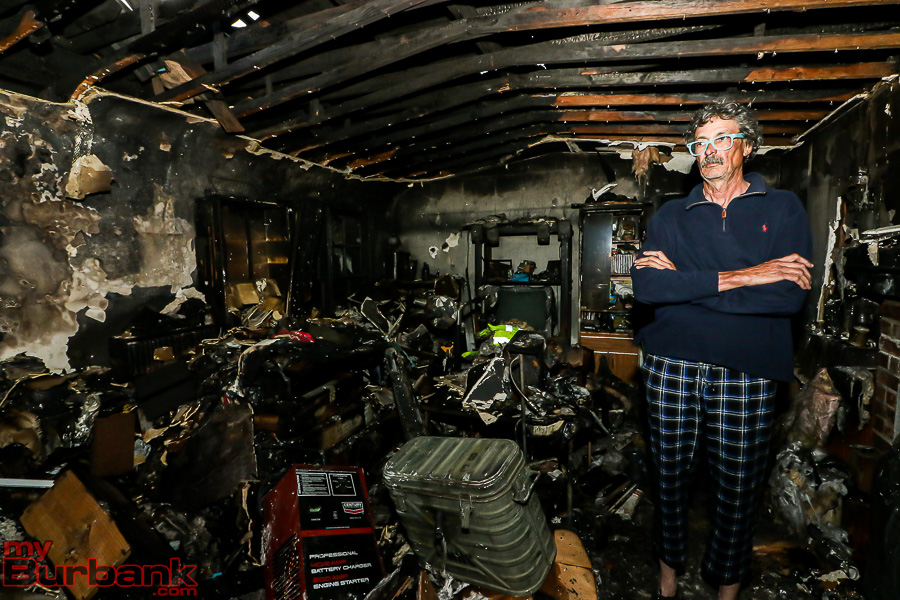 George Contreras stands inside of what remains of his Burbank home following a destructive house fire. (photo by Ross A. Benson)

Contreras has lived in his house on Lake St. since he was eight years old. His father, actor Roberto Contreras, purchased the property in 1967. In 53 years George Contreras has become a well-known member of the community and is known locally as George of Lake Street.

For the past two and a half years Contreras has worked as a crossing guard at elementary schools in Burbank. He’s earned the respect of locals through his job performance and giving nature, which is reflected in his volunteering at the Disney Family Cancer Center and the Burbank Fire Department.

Contreras is currently a crossing guard at Walt Disney Elementary School and is known for playing guitar outside of the school in between times he has to help students cross the street. Both parents and students have consistently shared their approval of him to staff members, a rare occurrence for the position.

“They said, ‘You’re the only crossing guard we’ve ever had [that] when we get phone calls and letters, it’s not complaining, it’s commending,’” Contreras said.

Aside from school personnel, local drivers also take the time to stop and thank Contreras for his contributions.

“I’ve had people come through the intersection who have nothing to do with the schools, they’re just on their way to work. And they stop me, they pull up and say, ‘Hey man, I appreciate you because you get us on our way,” Contreras said.

Contreras attributes the accolades to his dedication to the work. A former male nanny, he remains focused on the job and puts the safety of the children first.

“I really take this job seriously because I know that the children are the most valuable thing,” Contreras explained. “I know I’m carrying a heavy weight because the most precious thing[s] in the world I’m being trusted with and I’d better do the job right or I have no business doing it. I would give my life for those children.”

Aside from safety, Contreras also tries to pass along valuable life lessons to students.

“I [once] said, ‘Okay kids, time for George’s lesson: the word for the day: integrity,” Contreras recalled. When you say you’re gonna do something, you do it. Keep your word.’ That’s very important.” 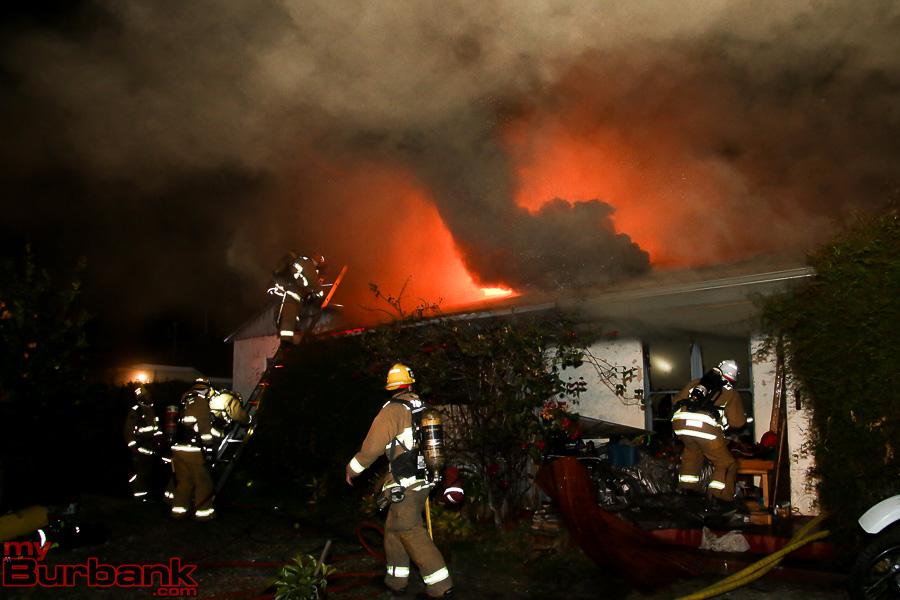 Firefighters work to put out the flames at George Contreras’ Lake Street home. (Photo by Ross A. Benson)

Following the fire, a neighbor, Sarah Radle, suggested starting a gofundme page since Contreras doesn’t have home insurance. At first, Contreras was skeptical due to his private and humble nature, but he eventually agreed to let Radle give it a go.

After only being up four days, the gofundme page has raised over $22,000 with a total of 336 donors thus far.

“My husband and I just moved down the street from Disney but even in that short amount of time we lived there George has always brought a smile to our faces,” said donor Jennifer Oganesyan.

“See him every day! Everyone loves him and he keeps our children safe. Most energy and character I’ve ever seen in any cross guard. The community needs to pay it forward for this man,” fellow donor Gordon Greer wrote.

Contreras has been following the good turn daily boy scout rule since 1971, wherein he performs a good deed each day. Although it was initially difficult for the modest Contreras to accept good deeds in return, he has grown more comfortable with the acts of kindness from both friends and strangers.

“Someone told me, ‘You’re giving those other people a blessing by helping them, doing something selflessly, and it makes you feel good. It’s your turn to receive because this is the time when you need it.’ When the people explained it in that manner, it made a little more sense to me.”

The response has astounded Contreras, who didn’t realize his impact until he was in need and the community stood by him.

“It’s overwhelming, I just cannot believe it,” Contreras said. “To get this response, I don’t think I’m worthy of it. Their care, love for me, they’ve carried it above and beyond what I’ve expected.”