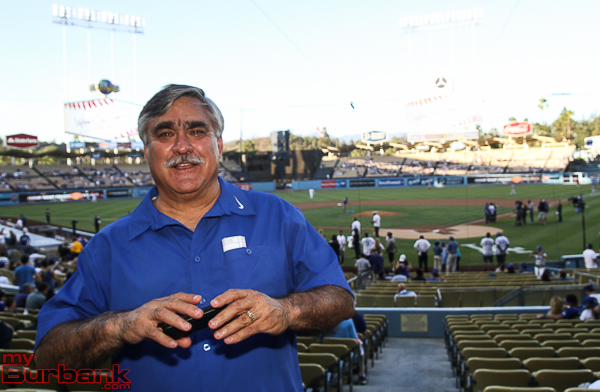 It’s likely there are few things in life more relaxing and enjoyable than spending several hours at a big-league baseball game.

Add that the game is being played at Dodger Stadium, one of the most beautiful, picturesque and iconic venues in the majors, the experience is magnified 100 fold.

For roughly 210 Burbank residents, that’s exactly where they found themselves because it was “Burbank Night” at Dodger Stadium.

It couldn’t have gone more splendidly as the National League West-leading Boys in Blue throttled the Cincinnati Reds, 5-3, behind Adrian Gonzalez’s three-run homer to right field in the fifth inning, Justin Turner’s sacrifice fly and run-scoring single, and recently-acquired Alex Wood’s five-hitter with three runs, three strikeouts and three walks over six and one-third innings as 43,407 looked on.

And because it was Friday night, it meant there were fireworks afterward, which everyone seemed to enjoy.

Jess Talamantes, Burbank’s vice mayor, accompanied by his wife Sandy, were in the stands more than a half hour before the first pitch.

The pair were nestled in the field section behind home plate where his brother Louis, owns season tickets for the last decade.

“I started coming to Dodger Stadium in the 70s when they had Ron Cey and Steve Garvey,” Talamantes said. “Later it was Fernando Valenzuela. There is a long history here and it began with Sandy Koufax, Don Drysdale and Maury Wills.”

Valenzuela, who won the National League Rookie of the Year and Cy Young trophy in 1981 after going 13-7, with 11 complete games, 8 shutouts, 180 strikeouts and a 2.48 earned-run average, now works as a Dodgers broadcaster.

Still beloved and fondly remembered, Valenzuela, a six-time All-Star, was busy taking pictures and speaking with fans in front of the press box before the game.

Talamantes, despite a hectic work schedule, tries to make it to Chavez Ravine, which opened in 1962 and has hosted an All-Star Game in 1980, numerous playoff and World Series games, as much as possible.

“I usually try to get to about 10 games a year,” he said. “I’d like to get to more games. What’s better than this? It’s beautiful and the weather is always nice.”

Judie Wilke, the Burbank Parks and Recreation Director and her husband Tom, were seated in the reserve section down the right-field line.

“We don’t go often, but we always make it to Burbank Dodger Night,” she said. “It’s always fun. My husband’s from Cincinnati. We had a good time because we were able to get together with people that we know.”

Wilke didn’t partake in the traditional Dodger Dog, but did eat soft-serve ice cream out of a pink Dodgers cap, while Tom had the same in a blue Dodgers cap.

Carol Mercado, who works in the Parks and Recreation Department where she is a supervisor, and her husband John, were also on hand. Mercado, along with the sports office staff, had a large hand in selling the tickets.

“I used to work in the parking lot at Dodger Stadium in the late 70s and early 80s,” she said. “It’s been about five years since I’ve been to the Stadium, and there have been a lot of changes.

Mercado said she roots for the Blue Crew. “It was fun sitting with all the Burbank people,” she explained. “I’m a Dodgers fan. I had a Dodger Dog. They won and that was good.”

Jason Dyer, who works in the Parks and Recreation Department and is the Recreation Coordinator, was also in attendance. He said that he looks forward to the annual event.

“I’m an Angels fan,” he said with a laugh, “but I always come out to support the city on Burbank Night. I also like watching the Dodgers on television whenever I can.”

Another who made the drive to the ballpark is longtime Burbank resident Mike Nolan, who was casually walking through the concession area.

When asked if he anticipates attending this game, Nolan said that he does. “You bet. I come every year,” he said. “I’m delighted to be here.”

One has the impression that they all were.