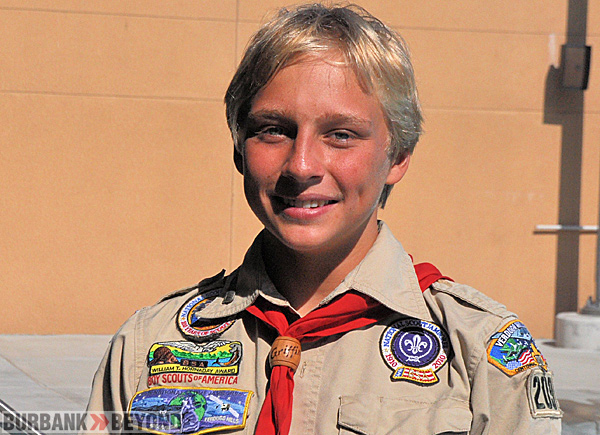 Most visitors to the East Fork of the San Gabriel River enjoy fishing, hiking, and nature photography, only concerned with piles of trash left by careless visitors.  However, there is a more invasive visitor, aggressively sucking up water resources, contributing to fire danger, and squeezing out native plants.  Enter the Tamarisk, an alien shrubby tree disrupting the San Gabriel River Watershed ecosystem.

Eagle Scout candidate Griffin Armstorff, from Boy Scout Troop 209 in Burbank, believes the Tamarisk can be brought under control.  Partnering with the US Forest Service and the Fisheries Resource Volunteer Corps, Armstorff is preparing an assault on the Tamarisk, intending to eradicate the shrub from the area near Heaton Flat on the East Fork of the San Gabriel River.

Why is this important?  The Tamarisk, native to the Middle East, was brought to the United States around 100 years ago as an ornamental shrub.  A mature plant with deep roots may suck up to 300 gallons of water each day, potentially denying moisture to native plants.  The Tamarisk adds little value to wildlife, as the shrub contains few nutrients.  In addition, the Tamarisk actually limits plant competition by depositing salt into the surrounding soil, preventing other native plants from taking root.

Armstorff and a large group of fellow scouts are planning a project to attack the Tamerisk from September 28th till the 30th.  The scouts will take on three separate assignments, including digging out seedlings, destroying Tamarisk seeds, and digging out mature plants.

Tom Walsh, a representative with the Fisheries Resource Volunteer Corps (FRVC), is happy to receive help from Armstorff and his volunteers.  “The Tamarisk is a definite danger to the ecosystem of the San Gabriel Watershed” Walsh advised.

To mobilize the troops and get them into action in the East Fork, Armstorff needs help.  The project will require tools, such as pruners, clippers, trowels, and loppers.  The project will also need food to sustain activities for 50 scouts during the 3 day period, coming to a grand total budget of $1323.

Armstorff is getting some additional help from local celebrities, including Jack Johnson, a well-known musician.  Johnson has pledged to meet all donations of $25 or less with the same amount, which should help the scouts meet their goal.

You can help the scouts take on the Tamarisk by donating at their project website.

Armstorff is also a member of the John Burroughs High School Water Polo Team, as well as performing as a trombonist in the school band.

Learn more about the Tamarisk and other alien plant invasions within the Angeles National Forest at the USDA website.