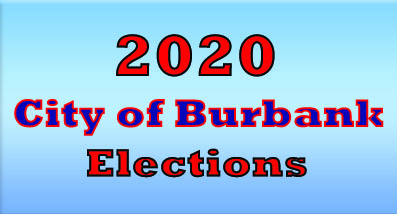 With so many mail-in ballots being sent in this year and needing to be opened and verified, election results in the County of Los Angeles are being updated on a daily basis.

As of today, Friday, November 6, the latest update has 3,722,367, which is shows 65.19% of the registered voters casting ballots and there are still 400,000 votes that were estimated to have been counted that have yet to arrive at the County facility to be counted. The latest count is all ballots received by Monday so all ballots mailed and received after Monday have yet to be counted. So far, around 43,000 have been counted that affect Burbank. It is unknown how many Burbank ballots remain to be counted since mail-in ballots that were postmarked by Tuesday are still arriving.

Votes in Burbank have continued to be counted and posted on a daily basis and there were some surprises, although not unexpected with the atmosphere in the Country for change, in our local political landscape.

Incumbent Councilman Tim Murphy has been running a consistent fifth in the results that have actually not changed much since the first results were posted on November 3 and have continued as of the Friday count.

Konstantine Anthony and Nick Schultz have stayed in the top two positions throughout and if results hold will win election to the City Council. Murphy, the incumbent will be out.  Emily Gabel-Luddy did not run for reelection. Newcomer Nick Schultz, a Deputy Attorney General whose main platform was to create a bold economic recovery plan for the reopening of Burbank, has held on to the second position the entire time and is positioned to fill the second seat.

One incumbent area voters felt confident in was the election of appointed Treasurer Krystle Palmer who defeated Lindsey Francois and Darin Shea by a large margin. Palmer replaced Debbis Kukta who left the position to take a job with the Burbank Unified School District. She will fill the rest of Kukta term that will expire in two years.

Once again voters showed hostility when selecting school board members. There were three seats up for grabs but only four candidates to vie for the positions. All three incumbents, Steve Ferguson, Armond Aghakhanian, and Roberta Reynolds all ran for reelection. Emily Weisberg was the only one from the outside to run.

So far results show voters throw their overwhelming support behind Weisberg who had a substantial lead of 7,472 votes over second-place runner, Aghakhanian. In fact, only 1,453 votes separated all three incumbents with Reynolds projected to finish last and not retain her seat as she has slipped 1,143 votes behind Ferguson who hold third.

One part of the election that is interesting is that Measure RC, which would have put in strong rent controls into the City, is going down to defeat by voters 64% to 36% while Anthony, who championed the ordinance, won by a large margin. It is not known if voters put the two together although Anthony was very public in his support of it throughout the election.

Although Anthony has been very active in Burbank for years, he has become a polarizing figure with many bringing up records from his past as well as the amount of cash ($43,241.51 as of his October 28 filing disclosure) that had a majority of his financial supporters who were not Burbank residents. It will be interesting to see what agenda he brings to the Council. Schultz raised $31,434.75 and in his last filing, only 4 of the 20 contributors were from Burbank with one being the Firefighters Union which donated $500.

Winners will be sworn into office on December 14 at 10:00 am in the City Council Chamber

Here are the County figures as of Friday, November 6 at 4:25 pm