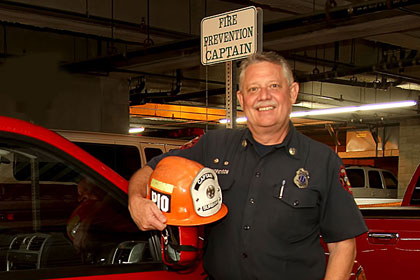 This past week the Fire Department also saw Fire Captain Peter Hendrickson become the Captain of the Fire Prevention Bureau, which includes the position of Public Information Officer (PIO), and Public Education Officer. Hendrickson has been with the Burbank Fire Department since 1979 and has worked in several positions during all those years, while still maintaining his Paramedic ratings.  He has also been in charge of Burbank’s USAR Team, Critical Stress Management Team,  and as a Board Member of Firefighters Local 778, where he held the position of Vice President for 14 years.  Hendrickson resides in Burbank along with his wife, Lisa and 2 kids.

In his position as Captain of The Fire Prevention Bureau, he oversees all the local studio stages which number currently 16, not counting Warner Bros., who alone has 34 stages. The city has 14 non approved stages but can film with a Fire Safety officer present.

In his role as Public Education Officer, Peter will be responsible for Fire Service Day, Fire Camp, and public education.  He says one of his goals is to get the Fire Department up to speed with ‘Social Media’.  With recent budget cuts where the schools almost have no fire education, he hopes to connect with kids and adults alike with Twitter and Facebook to name a few. As the PIO, he will be the official spokesman for The Burbank Fire Department.  He will connect with all the media at scenes of emergencies, and keep the public well informed with news from the department.