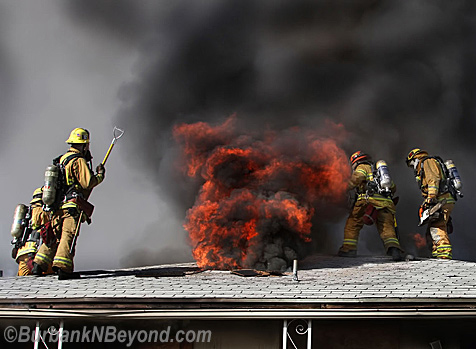 The man went to work diligently piling wooden pallets, kindling, and other materials in the room, preparing to build a fire that could potentially burn down the entire building.  Armed with a propane torch, he went about lighting the kindling…

An arsonist attempting to destroy the structure?  No, it was Captain John Nare, Arson Investigator for the Burbank Fire Department initiating a live training exercise for firefighters in property scheduled for demolition at 2223 Catalina Street in Burbank.

According to Chief Steve Briggs, Training Officer for the Burbank Fire Department, the structures already scheduled for demolition offer fire fighters “a rare opportunity for training in a real fire, not in a concrete training facility, but a real structure where a fire will behave as in any real emergency.”

The training program held on October 28 consisted of two burns per training shift, the first a single room fire built on the ground floor of a two story apartment, and the second built in the upper floor and attic areas of the same structure.

Prior to kicking off the training exercises, Burbank Fire Department leadership, including Battalion Chief Dave Schmitt and Chief Steve Briggs, delivered safety briefings with detailed instructions to all training participants.   Firm reminders to ensure proper procedures and discipline were followed, with the intent to provide maximum value to all, while minimizing risk.

“This is a real fire, and it is real hot” Chief Briggs cautioned all participants.  “No one gets hurt.  Keep your eyes on what is happening, use good technique, protect yourself, and just put the fire out.”

Although fire units were positioned adjacent to the training area, communications and reactions to the fire were initiated just as if the fire were called in from a citizen.  Units from stations 11 and 13 were on called upon first, with station 15 on standby as a backup.

As Capt Nare lit his first fire, and smoke began drifting from the structure, the call came out announcing a possible fire was identified in the building.  Crews began their methodical, well-practiced process of evaluating and approaching the potential fire threat.

Continuous communication among firefighters and leadership aligned each individual action, and the fire was quickly extinguished.

Following the first exercise Chief Briggs led a review session, where each action was reviewed, analyzed, and critiqued.  Very little critique, as the units performed just as expected, adding yet one more notch to their experience belt.

While the structures provided the most realistic environment possible, due to safety concerns and training regulations rooms did not include items such as chairs, tables, beds, sofas, and other obstructions present in actual houses or buildings.

The second exercise of the morning was a bit more complicated, requiring access to the rooftop, ventilation of the structure, and a more intense fire.

The firefighters regrouped, reset their engines, truck, rescue ambulance, and a water tender for the next exercise.

Capt Nare lit his second fire of the day, and the action kicked off.  Action that while clearly showing a sense of urgency, was again a methodical evaluation of the situation, communications to all members of the firefighting team, and multi-faceted approach to putting out the fire.

Engine company members entered the building through stairways, bringing water hoses into the building, while ladder “truckies” went for the rooftop.  A ballet of well-synchronized action performed in a stage built of smoke, fire, and debris.

As with the first exercise, firefighters quickly knocked down the fire, and went about a step-by-step process of ensuring all hot spots were eliminated and the structure brought back to a safe condition.

Chief Briggs explained National Fire Protection Association (NFPA) standard 1403 provides guidance on what can or cannot be done in a live fire training exercise.  This prevents the use of victims, accelerants, obstructions, and other items that may result in safety risks for firefighters and others during training.  This includes using a fire to accomplish complete demolition of a structure during training.

However, even with the limitations set by NFPA 1403,  Chief Briggs ensured that his script for today’s exercise “allows a bit of improvisation” on the part of units, and “allows a great, unique learning experience for each individual.”

On Thursday morning’s exercise, two new firefighters had their first opportunity to enter a live fire that was not built in a training structure.  Firefighters Tom Berry and Justin Searcy, having graduated from the Burbank Fire Department’s Academy only four months ago, found the exercise very useful.

Firefighter Berry was quite pleased with the exercise, stating it was “a lot better being in a live structure, more realistic, more heat, and it is the best training we’ve had so far.”

Firefighter Searcy, a former Marine with a tour in Afghanistan echoed that thought, adding “regular training prepared us for today, but it was a good learning experience.”

The fire department is also taking this opportunity to test some of their equipment, such as thermal imagers that will allow first responders to “see into the building” and determine exact locations of heat, including both fire and potentially victims.

Chief Frank Walbert, who also serves as Burbank’s Fire Marshall, explained Burbank residents should know that while larger fire departments in Los Angeles and other cities may have more fires than Burbank, the level of individual and unit training is very high.  “When you are a smaller fire department you have more control (over your training programs).  Logistically it is easier to take a single station out of service for training, and this allows us to maintain an intense program.”  Chief Walbert continued, “in the event of a major crisis, it is easy for a training crew to recover from the exercise and be back in service quickly,” which may not be possible in larger cities.

The second fire extinguished, the structure inspected and declared safe, critiques and

reviews completed, the Burbank Fire Department began their clean up in preparation to return units to service at their home stations.  Chief Briggs, satisfied with today’s training, thoughtfully acknowledged “this will definitely help us better prepare to save people’s lives.”