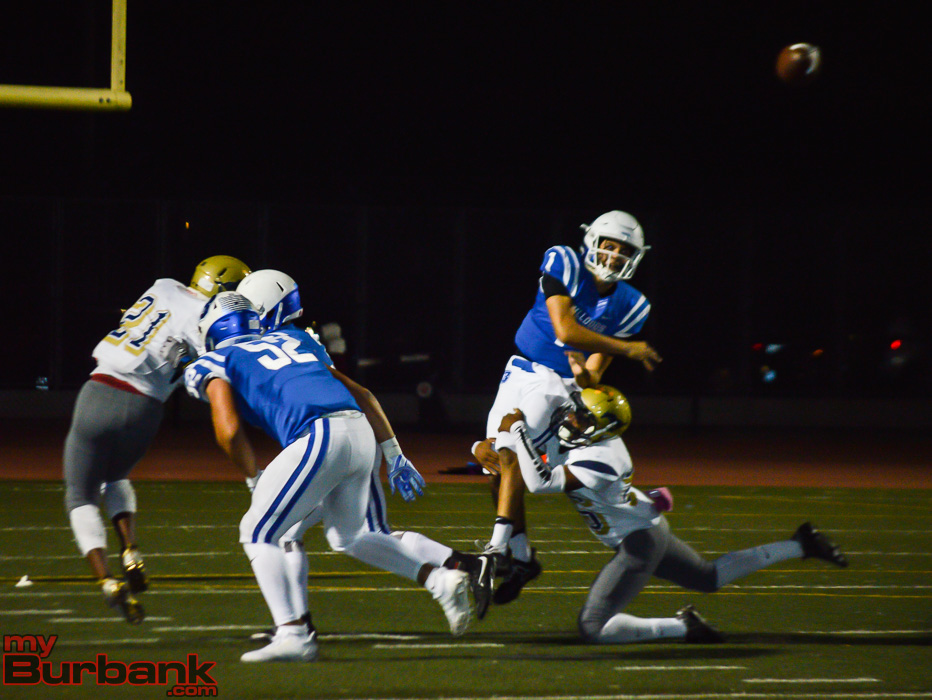 There were moments of high drama and extreme tension, but in the end pure relief and exultation by the Burbank High football team.

It took everything the Bulldogs had and then some in order to hold off Muir 38-31 in a Pacific League match on Friday night at Memorial Field and with the victory a share of the league title.

Burbank, which is a game in front of Crescenta Valley and Arcadia (5-1 in league) will now face its longtime rival Burroughs next Friday at 7 p.m. hoping to win the banner outright.

“Being a champion isn’t just being a front runner or being ahead,” first-year Burbank coach Adam Colman said. “It’s facing adversity. That’s been us all year. You’re not born to be a champion. You have to fight to be a champion and they did that tonight.”

Colman knows the Bulldogs will be challenged by the Indians.

“League championship on the line. Playoff berth on the line. It’s not going to be easy,” he said. “They want to prove something and do something special. We’re not done yet.”

“We knew they were going to come out strong,” said Porras, who completed 13 of 20 attempts for 223 yards. “They did and they just kept fighting. We kept fighting, too.”

How will the Bulldogs remain focused for the final regular season game?

“We just practice hard like we always do,” Porras said. “Go through everything. There’s no reason to share.”

When it mattered the most, Burbank’s defense shined as the Mustangs drove from their 16-yard line to the Bulldog seven-yard line as time expired.

Burbank (443 total net yards) scored on its opening series when senior tailback Darnell Williams (40 yards on 13 carries) found the end zone on a two-yard run as 9:32 remained for a 7-0 lead.

Burbank extended its advantage to 21-7 after an eight-yard spurt by Williams with 17.4 seconds left.

A 48-yard field goal by senior Andrew Rovira evened it at 24-24 as the clock hit triple zero.

Muir came within 14-7 when senior running back Jonathan Stephens (104 yards on 13 carries) exploded for a 76-yard sprint and 3:41 remaining before the half.

It was even at 21-21 on Love’s 20-yard strike to junior wide receiver Jalique Stephens (49 yards on three receptions) as 5:35 was left. Harutyunyan’s fumble after a 12-yard reception made the score possible.

Burbank raced ahead 31-24 with 7:21 left in the third period on a 24-yard pass from Porras to Smith that capped an eight-play, 59-yard march.

Harrison’s 43-yard punt return and 23 seconds remaining in the third period leveled it at 31-31.