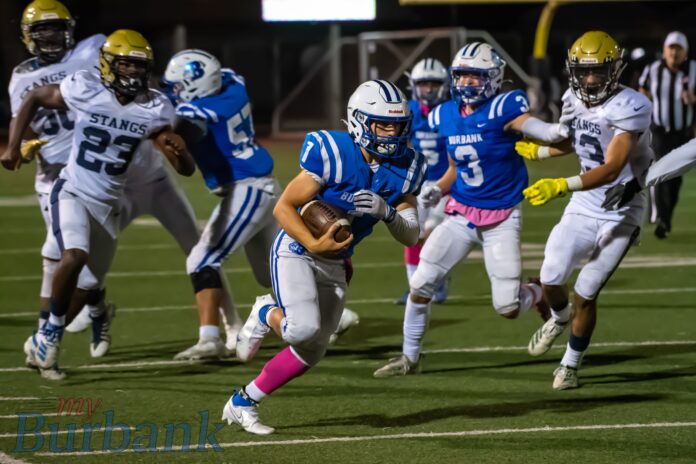 If there is one positive that the Burbank High football can take from Friday night’s 26-13 loss to visiting Muir, it is that the Bulldogs ended the game better than they started.
“We had the opportunities. The team really rallied. We had the ball with a chance to take the lead. That’s all I can ask for. That’s the team I have been waiting to see from us,” Burbank coach Adam Colman said. “Once we went down 19-0, it was backs against the wall how do you respond and they battled and it was the quarterback to the line to the defense to the sideline, the sideline was engaged. That’s something we can build on.”
Burbank turned the ball over four times in the first half and was down just 12-0 at the intermission.

After a scoreless first quarter, Muir got on the board as quarterback Mahki Clark threw a desperation pass down field and Charles Bennett came out of nowhere to grab it and score a 61-yard touchdown.
“I ran the wrong route. I ran a post, but I saw my quarterback run with me so I flowed with him and honestly I didn’t know if that ball was coming to me or to the single-side receiver,” Bennett said. “As soon as he threw the ball in my mind I said it is mine and I’m going to go get it.”
Muir added a touchdown with just 17 seconds left in the first half as sophomore Isaiah Blades caught a 38-yard touchdown from Clark. Blades is the younger brother of Elijah Blades, who currently plays for the the University of Florida.
Muir (4-1) went up 19-0 at the 6:36 mark of the third quarter as running back Jachai Pulley scored on a 1-yard-run on fourth down.
Burbank (1-5) then woke up and got on the board by scoring on a fourth-down situation, also from the 1-yard-line, as quarterback Dylan Robinson scored on a keeper.
Facing a fourth down and 18 situation in the final quarter, Burbank used a trick play with multiple handoffs that resulted in Jagg Richer completing a pass to Robinson that was just enough to keep the driving rolling.
Colman rolled out another one of his surprise plays as Jonathan Powell scored on a 5-yard run facing a fourth down and goal situation with 7:09 to play.
The touchdown even further ignited Burbank’s momentum.
Burbank then held Muir on its next possession.
But Muir returned the favor by not allowing Burbank to get past its own 37.
Pulley added a late 15-yard touchdown for Muir after Burbank turned the ball over on downs with just 1:06 left to play.
Burbank will host Pasadena at Memorial Field next Thursday.