One week after an impressive 18-point victory on the road, Burbank High came crashing to earth, struggling on offense and defense and fell to Ayala, 20-13, in a nonleague football game Friday night at Memorial Field.

The Bulldogs’ 38-20 triumph over highly-ranked Monrovia seemed like a distant memory as they could not find drives or defensive stops in the second half as Ayala scored a pair of touchdowns.

“They punched us in the mouth,” Burbank coach Richard Broussard said. “That’s the formula to beat us. We’ve got to figure it out.”

Burbank (1-1) led 13-7 at the intermission when junior quarterback Guy Gibbs found junior wide receiver Forest Fajardo (game-high 104 yards on five receptions) in the right corner of the end zone on a 17-yard pass for a 6-0 lead and 6:34 left in the opening quarter. 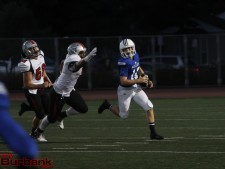 When the extra point by senior place kicker Andrew Hank was converted, the Bulldogs pulled ahead 7-0.

The initial points came after Gibbs marched the Bulldogs from the Ayala 47-yard line, and directed his team on an eight-play drive.

It remained 7-0 until 10:30 was left in the second quarter when a 42-yard field goal attempt by Hank, who plays on the soccer team, was mishandled and resulted in a 23-yard pass from Fajardo, the holder, to junior running back Andy Reyes, who caught the toss and raced into the end zone to make it 13-0 after Hank’s point after failed. 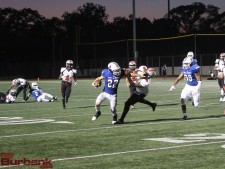 After botched field goal, Andy Reyes scores on a 23-yard pass from holder Forest Fajardo. (Photo by Ross A. Benson)

“We didn’t finish plays and we didn’t finish drives,” Broussard said. “I think we may have read our press clippings and thought we were better than we were. But you can’t just show up and think you’re going to win. You have to go out there and play.”

Broussard, in his second season as Burbank’s head man, added: “This loss is on me. I need to do a better job of calling plays. Things got bottled up. We got complacent. That’s on me. I didn’t do a great job. But we’re going to learn from this and get better.”

With Burbank ahead 13-0, it seemed all was fine but a storm was brewing as Ayala (1-1) then marched down the field 60 yards and capped the 11-play drive when senior fullback Luis Pena (16 yards on five rushes) scored on a one-yard burst and 4:21 showing before the half.

Ayala (281 total net yards), which lost to Chino Hills, 31-0, in its season opener, received the second half kickoff and drove from its 20-yard line, and eventually finalized the nine-play excursion with another one-yard run from Pena and 7:48 remaining in the third quarter for a 14-13 advantage.

“It was one of those things,” Ayala coach Randy Reams said. “The physicality. We ran the ball and we had to be patient.”

On Burbank’s next possession, Gibbs was picked off by cornerback/quarterback Zach Brozick, which then saw Ayala advance the ball from its six-yard line, and 16 plays later senior tailback Jordan Charles (game-best 112 yards on 20 carries) scored on a one-yard scamper that made it 20-13 with 11:39 left in the fourth quarter.

“We got a little bit of pressure on the quarterback, but they battled us,” Reams said. “They’re a great football team, and they’re going to do well in [Pacific] League. They’re well-coached, and they play hard.”

If there’s one good thing from the loss, it’s that the Bulldogs, who picked up 240 yards, have next week off which gives Broussard and his staff time to gather their thoughts and prepare for Canyon on Sept. 17 at home.