Burbank’s hillsides had not had a serious brush fire in decades until this past weekend when one started near the 210 Freeway quickly escalated.

City fire engines were first dispatched to the original fire but after a while when it became apparent that the fire may crest the hills and come toward Burbank, they returned to protect their home town.

While the first started at about 1:30 p.m. Friday, it was not until 4:51 in the afternoon that it started to be of enough of a concern that the first brush assignment was dispatched in Burbank.

Units positioned themselves up near Brace Park and Country Club Drive and started the long wait for the fire to crest the hills and start down toward Burbank homes.

Once the fire’s path was imminent, Burbank fire officials gave mandatory orders to everyone basically above Brace Canyon Park all the way over to the Cabrini Villas. The area included all of the private housing off of Castleman Lane.

Burbank police officers began the task of going door to door to advise residents of the mandatory evacuation. They recorded all addresses checked and advised residents. They kept track of each decision because they could not physically force a resident to evacuate. The City of Burbank and the Red Cross set up an evacuation center at McCambridge Recreation Center. About 10 residents were there around midnight. 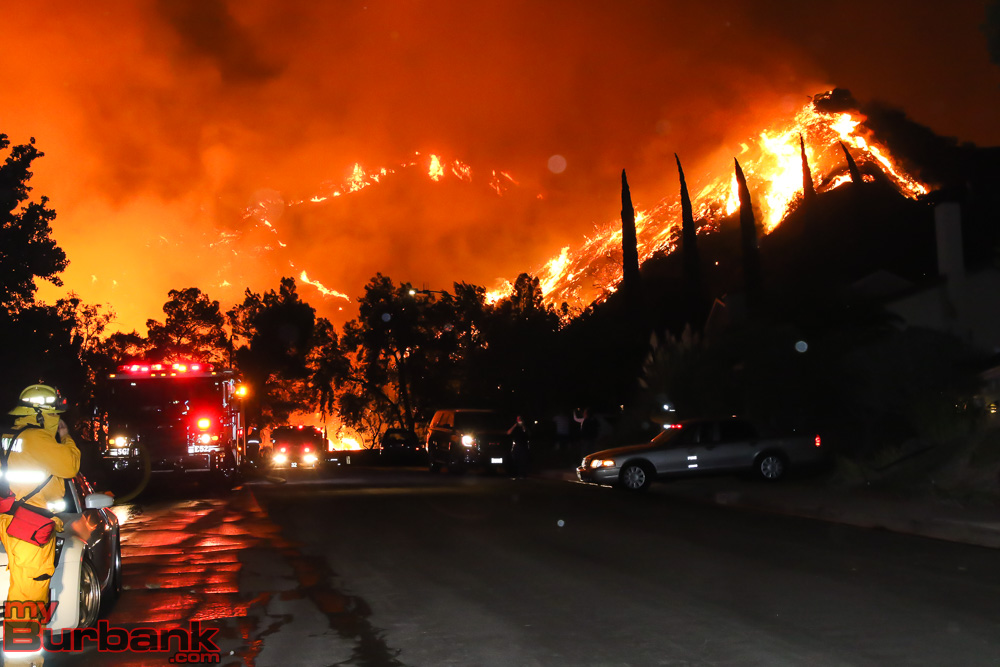 During the night, the first concern was the Stough Canyon Nature Center. Firefighters worked hard to protect the structure from the fire. It is unknown how much damage has been done to the trails near there.

As soon as the battle was engaged, the fight to save homes on the hill began. Engines and firefighters from all around Southern California were part of the unified command that was run in the Burbank area by the Burbank Fire Command Staff.

Los Angeles City Helicopters, who only fly at night in extreme emergencies, made water drops all night as the main focus of the fire turned to Burbank. Listening to the pilots on their radio, there was a calm, but confident demeanor as they systematically hit hot spot after hot spot.

As dawn broke, the houses on the hill were still safe. Firefighters continued to man the streets around the hillside. Firefighters made a series of drops of Phos-Chek fire retardant from Brace Canyon all the way to La Tuna Canyon which helped stop the spread of fire.

Some firefighters were replaced by others after working as many as 36 hours straight in heat over 100 degrees.  Many residents brought water, Gatorade and even ordered up pizzas for firefighters and brought them to the city’s main fire station on Orange Grove.  In fact, there were so many donations from grateful residents that the fire department put up a sign saying that no more donations would be needed.

Officials from the Los Angeles Fire Department have estimate the acres burned at about 5,800 as of 10 p.m. Saturday and as little as of 10 percent of the fire area has been contained.

As of 10 p.m. Saturday evening, fire officials lifted the mandatory curfew and let only residents and members of the media into the fire zone.  Those returning had to show proof of residency.

Fire engines will be standing by in the area for the next couple of days to protect against flare-ups.