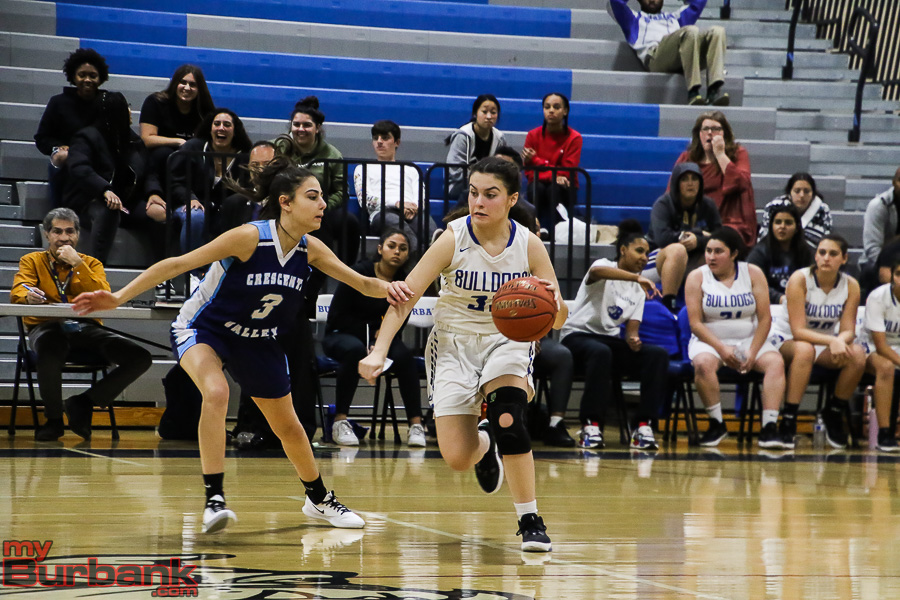 After four quarters, the Burbank High girls’ basketball team took only 30 shots from the field in its Pacific League game against visiting Crescenta Valley on Thursday night.

The reason for taking so few is because the Bulldogs committed more than 30 turnovers which translated into a 53-40 setback.

“We must have committed at least 15 turnovers each half,” Burbank coach Jett Del Mundo said.

Del Mundo continued: “I’d say that’s probably the worst game that we have played, but credit CV for that by getting in our face and playing man-to-man,” he said. “But we have to have more composure than that. If you give your opponents 20, 30 more opportunities than you, you’re going to lose no matter how good you are.”

Point guard Kim Pimentel was missing from the lineup due to a knee injury she suffered during the Muir game, a 45-35 victory for the Bulldogs.

The junior floor leader is a heady player and is expected back in the starting lineup in two or three weeks.

The two were knotted at 10-10 heading into the second quarter after the Bulldogs (6-6 and 1-2 in league) made four of seven from the field.

“This is the first game where we didn’t compete,” Del Mundo said. “We showed up for the first quarter and then we thought, we’re fine. They were hungrier than us and they wanted it more than us.”

In the second period, Burbank sank one shot in six attempts and it came late in the frame when senior shooting guard Bri Castro scored.

The Bulldogs missed their first six shots from the floor in that quarter before Castro, who drained two three-pointers in the opening frame, found her range with about a minute left.

“This game we didn’t play with a lot of poise,” said Castro, who finished with a  game-best 19 points. “We kind of just threw the ball. We just have to work together and keep up the positivity and hustle back if we turn it over and not let them score.”

Castro, who made five three-pointers on the evening, went on: “I like to keep the positivity up, so this was not one of our best games,” she noted. “We just all kind of crumbled and gave in to their pressure and let them lead the game. This was a great learning experience for us.”

The Falcons (9-5 and 1-2 in league) came out and took 16 shots in the initial frame while making four and added 17 shots in the second quarter, converting six.

Senior point guard Denise Dayag tallied nine of her 14 points in the first half for Crescenta Valley and senior power forward Lily Geck added six of her team-best 16 points.

Again, the Bulldogs struggled to find their shots in the third quarter, making four of seven while the Falcons (22 of 64 for 34.3 percent) attempted 14 and drilled seven which resulted in a 43-24 edge.

Burbank came within 34-22 with 3:21 left in the period when Castro sank the third of her three-pointers as the Falcons asked for time out.

It took a while, but the Bulldogs finally outscored the Falcons in a quarter as Burbank hit four of 10 from the floor and seven of 15 from the free-throw line in the fourth period.

The Bulldogs were successful on eight of 17 from the charity line (47 percent) and the Falcons made seven of 20 (35 percent).