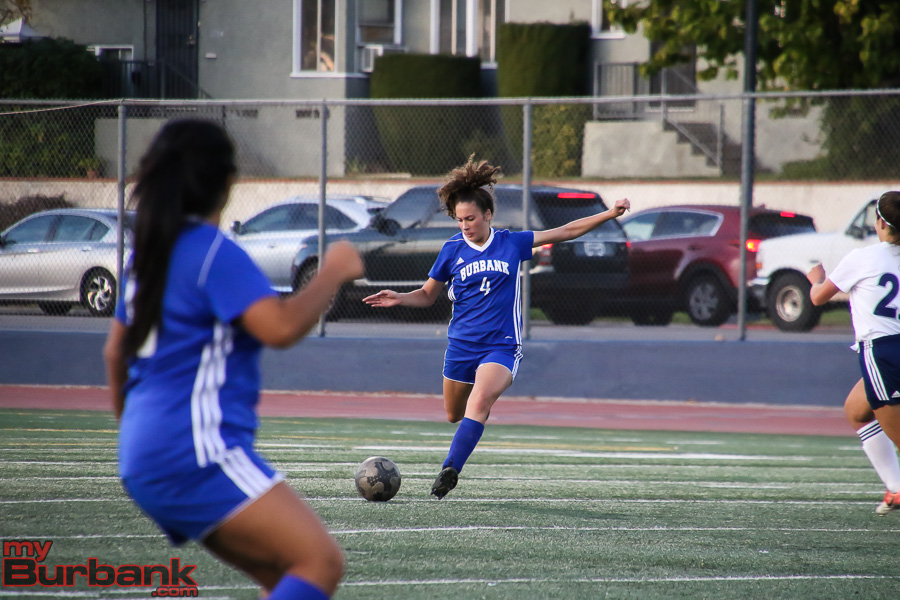 Burbank High and host Hoover needed a victory in the worst way, but it was the Bulldogs who came away with the triumph, a 2-0 decision on two opening-half goals.

In the 11th minute and from 20 yards away, sophomore forward Erin Trainor made it 1-0.

“I really think we’re going to pull through and I think we’re doing really good,” Trainor said of her team. “I definitely think our connection with this season’s team is going really well.”

Trainor also addressed her goal. “I usually play center back, so that was definitely different for me,” she said. “I saw the opportunity of a run-in. So I took it. I didn’t even get a really good touch on it. I poked it and it went in.”

The Bulldogs (2-5 and 2-3 in league) stretched their advantage to 2-0 on a 20-yard tally in the 32nd minute by freshman forward Madie Chase.

“We did get better today from the last game,” Burbank coach Pablo Diaz said. “I think this game was tougher in league than the last one. It’s good to get the lead earlier. That’s always good to keep the confidence up.”

The Tornadoes, who began the season 4-1, but have struggled mightily since, had a tough time getting off clean shots on goal.

It’s not that Hoover didn’t get off some attempts, it did, but many were simply not high percentage shots.

Burbank, which had a 2-0 triumph over Muir, had a kick in the fifth minute. Hoover (6-9 and 0-5 in league) then countered, but sophomore forward Madeline Coopersmith lost her footing and slipped on a 35-yarder in the eighth minute.

Chase’s 40-yarder fell short in the 10th minute and in the 11th minute, Chase added a 25-yarder that drifted left of the goal.

In the 13th minute Chase had a solid chance at a goal from straight on and 20 yards out, but her kick missed the net and bounced back to Trainor, who then blasted a quick rebound shot.

In the 18th minute Trainor’s 25-yarder failed to locate the net and in the 19th minute sophomore center defender Brianna Romero unloaded a 35-yarder for the Bulldogs.

Mendoza’s 10-yarder was scooped up by Britton-Naime in the 25th minute and a 25-yarder by Burbank junior right wing Sydney Sugars was unsuccessful.

Chase’s 15-yarder sailed high over the net in the 39th minute to close out the opening half which Burbank dominated.

Coopersmith then delivered a 15-yarder in the 43rd minute and Hoover tacked on a kick in the 53rd minute.

“If I’m being honest, today we didn’t play our best game,” Hoover coach Luis Ardiano said. “I have a lot of confidence in our team. Sometimes there are so many lows against you, but that’s an indication that something great is going to happen. That’s a process for them and for me.”

Partida’s 15-yarder in the 75th minute failed to find the net and a corner kick by Sugars also failed to produce.

Coopersmith then tacked on a 25-yarder in the 79th minute and in the 80th minute, Simmons had a 35-yarder scoot left.

Burbank senior goalie and co-captain Ashley Im had an outstanding afternoon against the Tornadoes after keeping them out of the net.