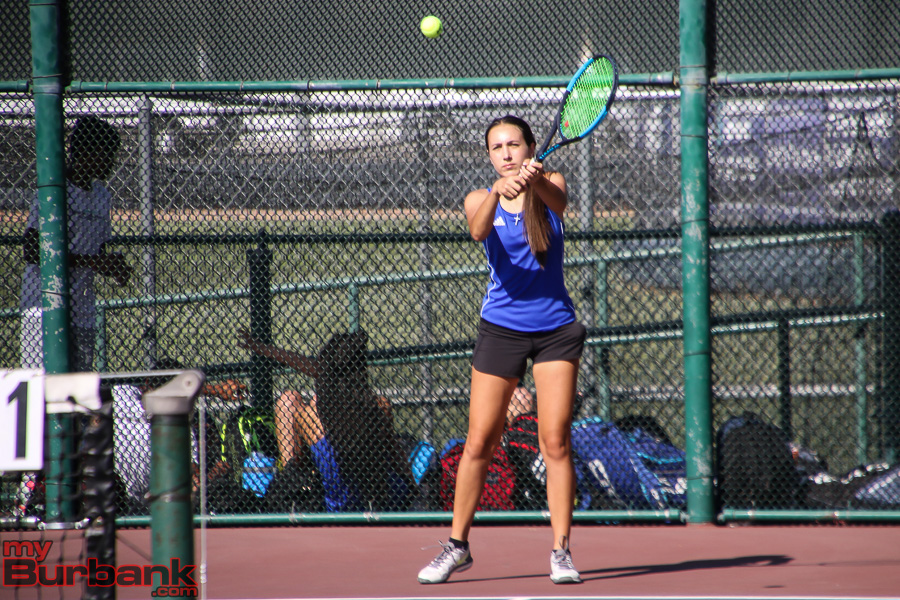 After the Burbank High girls’ tennis team stood and went toe-to-toe with longtime crosstown rival Burroughs for two hours and forty minutes on a warm and sticky Tuesday afternoon, the host Bulldogs finally emerged with a hard-fought 11-7 Pacific League triumph.

Burbank, which has six wins and two losses overall this season and is 3-2 in league play, employed a balanced attack in order to score points as its singles players garnered six points and its doubles duos grabbed five.

Leading the charge as usual for the Bulldogs was senior Kristina Kirakosyan, who swept at No. 1 singles, faring 6-1, 6-0, 6-0.

Kirakosyan knocked off Burroughs No. 1 sophomore Isabella Harris-Bermudez, No. 2 freshman Elane Shane, who was substituting for sophomore Lauren Pieri and No. 3 freshman Kaitlyn Glaim.

Though the match itself wasn’t that lopsided, Kirakosyan wasn’t hard-pressed while earning her three points.

“Yeah, I had a pretty easy time,” admitted Kirakosyan after her work was concluded. “I don’t know if I expected more [from Burroughs], but they played better last year, in my opinion.”

Meanwhile, Harris-Bermudez picked up a set winning 6-1 as she defeated Burbank No. 3 singles, senior Natalie Khachikian.

Pieri did as well at 6-3 when she knocked off sophomore Lilyan Hawrylo, who was subbing for Khachikian.

Though the Indians are without a win this season in four overall matches, which happen to be in league, they are improved over the last few seasons and are headed in the right direction.

Burroughs fared much better in doubles action as the No. 1 tandem of senior Alice Weber and senior Suzy Kim claimed two sets at 6-2, 6-2.

“As for the singles thing, usually schools stack their singles so they put the better players there,” explained Weber. “For us today, we just tried to keep it consistent and play our usual game. Make sure that we don’t make a lot of unforced errors.”

Weber then added: “This is our first year playing together, but we’ve known each other since the seventh grade,” she said.

Weber said it’s difficult to tell for sure if the team is improved because there are so many variables.

“I don’t know if we’re better,” she said, “but we have different players and we’re doing different lineups.”

Burbank’s No. 1 doubles team of sophomore Elli Sumera and freshman Nairi Zeytounzian held off Weber/Kim at 7-5.

Burroughs’ No. 2 doubles team of sophomore Vanessa Muga and junior Keili Brahms also picked up two sets at 6-4 and 6-3.