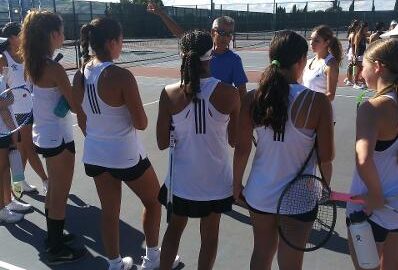 It figured to be a tough week for the Burbank High girls’ tennis team with a couple of top Pacific League opponents on the schedule.

At the same time, it provided the Bulldogs with an immediate opportunity to ascend or descend in the league standings while encountering the difficult stretch of matches.

Burbank didn’t get the result it wanted after it suffered a 14-4 league home defeat against rival Crescenta Valley on Tuesday.

Burbank received three singles victories from No. 1 player Sena Hammel, though the Bulldogs fell for the first time on the season.

Burbank (5-1, 3-1 in league) finished second in league behind powerful Arcadia last season before advancing to the CIF Southern Section Division III quarterfinals. Burbank and Arcadia will meet Thursday at Arcadia to complete the week.

“It’s definitely a hard stretch of matches, so you try to get up for it as best you can,” Burbank coach Loi Phan said. “With Burbank, Crescenta Valley and Arcadia, it’s kind of like a playoff week.

“It tells you early on what the playoff spots might be. Crescenta Valley played a lot better than us today. They were the better team. We’ll see what we can do against them when we play them the next time.”

Crescenta Valley (3-0 overall and in league) jumped out to a 4-2 lead after the first round Tuesday. The Falcons, who took third in league last season, held an 8-4 advantage entering the final round.

Hammel, a sophomore, proved to be the bright spot for the Bulldogs.

Hammel opened with a 6-4 victory against Nicolette Aghabegian before earning 6-1 wins against Natalie Mirbegian and Claudia Chmielewski.

“The first set was hard for me, so I had to try to mix it up and hit more light shots,” Hammel said. “In the other two sets, I just tried to stay consistent.

“Right now as a team, we just can’t get frustrated with these two matches this week. We just have to try to hit the ball over the net and be consistent doing that.”

The Bulldogs other victory came from the No. 1 doubles tandem of senior Nairi Zeytounzian and junior Brianna Kobramasihi. The duo paired up for a 7-6(8-6) win against Amanda An and Kristen Kim in a match that took about an hour to complete.

“We’ll get another chance against CV,” Phan said. “We now have a better idea what we are up against the next time we play them.”