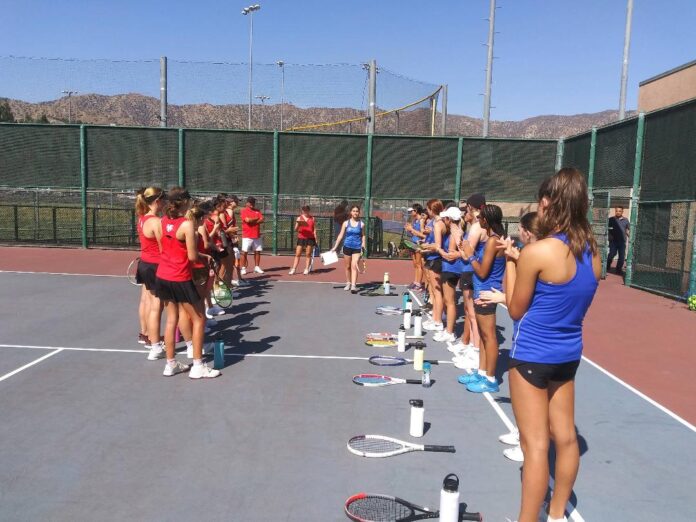 As a sophomore, Sena Hammel is trying to fit in at the top of the lineup.

In the early stages of the season, she’s making a case to remain there throughout the season for the Burbank High girls’ tennis team.

“It’s nice when you can contribute at No. 1 singles,” said Hammel, who recorded Burbank’s 10th point with a 6-2 win against Nathalie Genyk. “It’s great to be at No. 1, but you feel a little pressure. We have a good team and the seniors have a lot of trust in our team.”

The Bulldogs, who began the season with a 14-4 nonleague home win against Immaculate Heart on Tuesday, also got two wins in singles from Bernadette Hovhanasian, 7-5, 7-5, and the doubles tandem of Ellen Petrosyan and Molly Foenander, 6-3, 6-2.

“So far, our Nos. 1 and 2 singles player have held their own in Sena and Bernadette,” Burbank coach Loi Phan said. “We’re still trying to figure out some things with other parts of our lineup.

“We’re also very solid with our Nos. 1 and 2 in doubles. In a lot of ways, we are a totally new team after some of our top players graduated. I think we were decent in our first two matches and we’ll see what we can do in league.”

The Bulldogs got a 6-0 doubles win from Chihiro Kato and Jessica Han.

Burbank held a 5-1 lead after the first round before building a 7-5 lead entering the third round.

Flintridge Sacred Heart, which finished third in the competitive Mission League last season behind Harvard-Westlake and Marlborough, got two wins in singles from No. 1 player Meghan Garrity 6-3, 6-0, and two victories from the No. 1 doubles duo of Madison Wu and Mia Wertheimer, 6-4, 6-0.

The Tologs also got a singles win apiece from Genyk, 6-0, and Ashley Hurjak, 6-1, and a doubles victory from Emma Oakland and Grace Garrity, 6-0.

Burbank will begin league competition at 3:30 p.m. Tuesday with a home match versus Hoover.