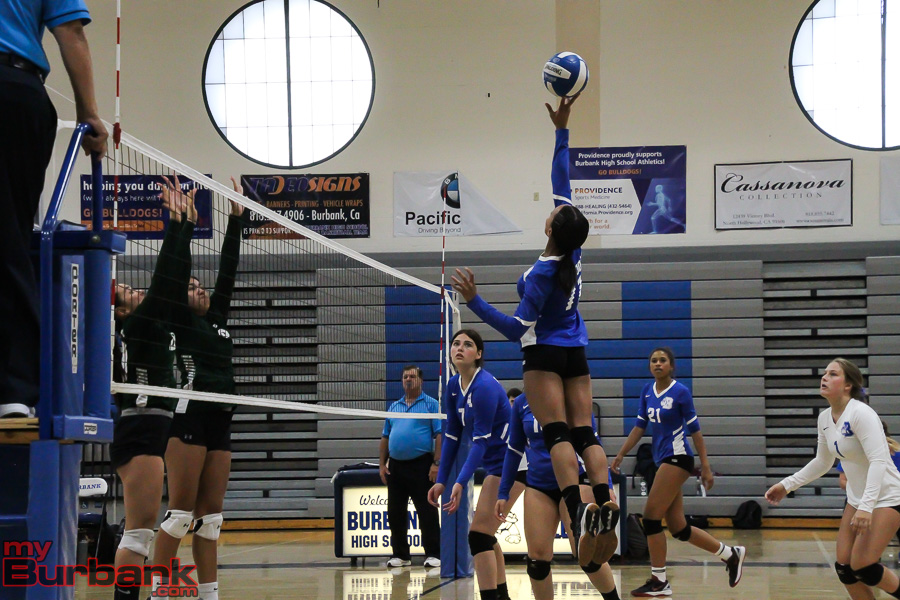 One set does not a match make, as the Burbank High girls’ volleyball team learned in its season opener, a nonleague affair against Burbank-based Providence on Monday afternoon.

Was what happened to Burbank merely taking its foot off the gas pedal or merely taking Providence lightly after a relatively easy first-game win?

It may not have been either, but something happened after the first set as the Pioneers seized control and never let up.

The first game saw the Bulldogs dart ahead 5-3 on a kill from senior outside hitter Katie Treadway, who had a solid outing, per usual.

“I think we really lost our energy there and I think we just lost our momentum and with their serves, we couldn’t get back to it,” Treadway said of the struggles the Bulldogs encountered during the last three sets.

Treadway added: “After the first set, I think we did really good and we were just expecting to do the same thing, but it didn’t play out like that,” she noted. “Providence came out and they were scrappy.”

Treadway said the team felt good about itself after the initial set. “I think there was a little bit of overconfidence because in the first game we did really good,” she pointed out. “We need to have that confidence, but we need to stay with the game and don’t think too big. Just keep how we’re playing.”

Providence evened it at 6-6, but Burbank then moved ahead 11-8 on another winner from Treadway.

Back-to-back kills from Burbank sophomore opposite hitter/middle blocker Gabriella Damroze made it 15-8 and Damroze’s blast made it 19-9.

The Bulldogs drew within a point of the game on a rocket from senior setter Kassandra Gonzalez and then took the game on an ace.

“I think we kind of just got in our heads,” said Eskander of the latter portion of the match. “I think maybe we got a little over confident. We thought it was going to be easier than it ended up being and kind of just fell apart. We weren’t very united.”

Eskander continued: “I think it’s more about the execution. Providence is kind of really scrappy and that’s what got to us. I think the game just got to us,” she said.

From there, the Pioneers cobbled together an 11-3 blitz as they moved in front 14-13 on a tandem block by senior outside hitter Liana Artunuan and sophomore middle hitter Sophia Guerrero.

Burbank led 15-14 on Treadway’s kill, but the Pioneers retook the lead 18-15 on a mishit from Burbank senior libero/defensive specialist Morgan Bolger.

Providence led 22-17 on Artunian’s winner and 23-20 when Burbank senior outside hitter Brandice Hibbard’s hit sailed out of bounds.

The Pioneers evened the match at one game apiece when Damroze hammered the ball out of bounds.

Often times when a match is deadlocked at one game apiece, the third set is crucial and it was Monday.

Providence swiftly took control 6-3 on a mishit by Burbank junior opposite hitter Tamryn Betts. The Pioneers then led 9-4 on an ace from senior libero Isabella Mahan-Mesa, who had nine digs.

Providence bolted in front 14-8 on a tapper from sophomore outside hitter Ashley Davis, who delivered 11 kills.

The Bulldogs then came within 14-13 on a spike from Damroze as the Pioneers asked for time out.

A kill from Davis made it 16-13, however, consecutive service aces from Tawil brought Burbank to within 18-16.

Providence forged ahead 20-18 on a smash from sophomore outside hitter Dolce Prieto (eight kills) and captured the game on Tawil’s hitting error.

“I just think we needed to just settle down after the first set. Once they remembered that they can play at a high level, that was it,” Providence Coach James Jimenez said of the final three sets. “Once we got our passes to our setters we were going to be fine because we have four hitters who can put the ball away.”

The set clincher saw the Pioneers lead 4-2 on a kill from sophomore libero Mia Madariaga and 8-4 on Prieto’s winner.

Prieto’s kill made it 15-9 and Providence dashed in front 19-9 on back-to-back hitting miscues by Damroze.

Prieto’s bullet made it 21-9, Hibbard’s winner trimmed the advantage to 23-11, but a clean spike from Prieto gave the Pioneers the set and match.

Senior setter Jennifer Tolentino, who had 11 assists, was a key contributor for the Pioneers.