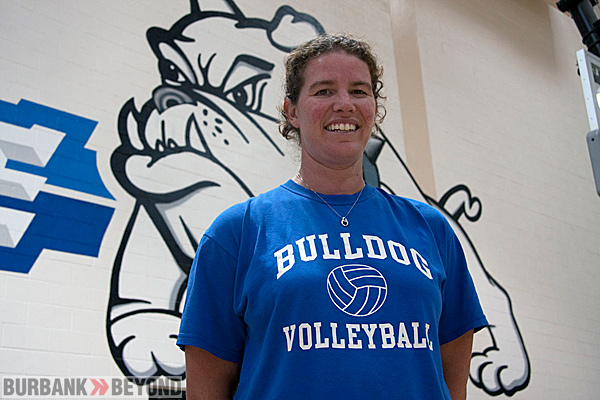 Onward and upward. The Burbank girls volleyball program took significant strides last year when the Bulldogs advanced to the second round of the California Interscholastic Federation playoffs for the first time in 36 years. A loss to Whitter Christian, the eventual CIF champion, prompted these lady Bulldogs to take the next step this season.

With nine lettermen returning including five starters, a shot at the league championship is at the forefront for Burbank Coach Sarah Brown. After finishing in third place a year ago with a 10-4 league record and 11-5 overall, Brown feels this year’s team has the makings to claim Burbank’s first league title since 1975.

“I feel like since we finished last season as we did, the seniors are really pushing to win league,” said Brown, who begins her sixth year at BHS and is a 1994 alum. “This is the first time I have athletes who genuinely want to win league and are not just saying it. I want to have a winning tradition here.”

Brown has established the groundwork for a successful program. Attention to detail and an emphasis on fundamentals and team play have led to positive results not seen at Burbank in more than three decades.

“I want people to respect Burbank volleyball. Not just for our volleyball playing on the court but for the type of program that we are,” Brown said.  “I want the girls who come through Burbank High and play volleyball to have a good experience. I want them to learn how to play volleyball, to be competitive but also to become good people.”

The Bulldogs will be led by a trio of formidable players who form the nucleus of the squad. Seniors Stephanie Eskander, Stefanie Lin and Tyler Brooks each begin their third year on the varsity level.

Eskander was a first-team all-league selection from 2011. As one of the top middles in the league, Brown relies on Eskander to be the leader on and off the court.

“She is such a good leader,” Brown said. “Stephanie gets the job done on the court but after practice she is always motivating the girls as well.”

Lin and Brooks were named to the all-league second-team last season. Lin, a libero, and Brooks, the team’s setter, need to be consistent throughout the season for Burbank to have a shot to unseat Burroughs as Pacific League champions.

“We have to rely on Stefanie a lot to pass, to receive, to dig and to keep our rallies going,” Brown said. “Tyler is the quarterback out there. They are really good players.”

Seniors Jamie Gonzalez and Sharon Youn round out the returning starters. Brown describes Gonzalez, an opposite hitter, as the “silent killer” who takes care of business in a quiet manner and Youn, a middle, as a “force in the front row.”

Burbank had a good summer capturing second place in its own league and third at Crescenta Valley. A strong showing at the Gabrielino Tournament provided more confidence for BHS.

The Bulldogs open their season on September 5 at home against Golden Valley at 3:30 p.m. Pacific League action begins on September 13 at Muir.

Experience at the high school level is irreplaceable. Burbank has the experience and talent to go farther in the post-season than last year’s team did. But the number one goal is to win that elusive league title. And if they were to do that?

“I probably would cry,” said Brown, who has led Burbank to four consecutive postseason appearances. “I would be more excited for them because I know how much they want it. They were so excited last year to make it to the second round because they knew they were the first team to do it in such a long time. To win league for the seniors would mean so much.”