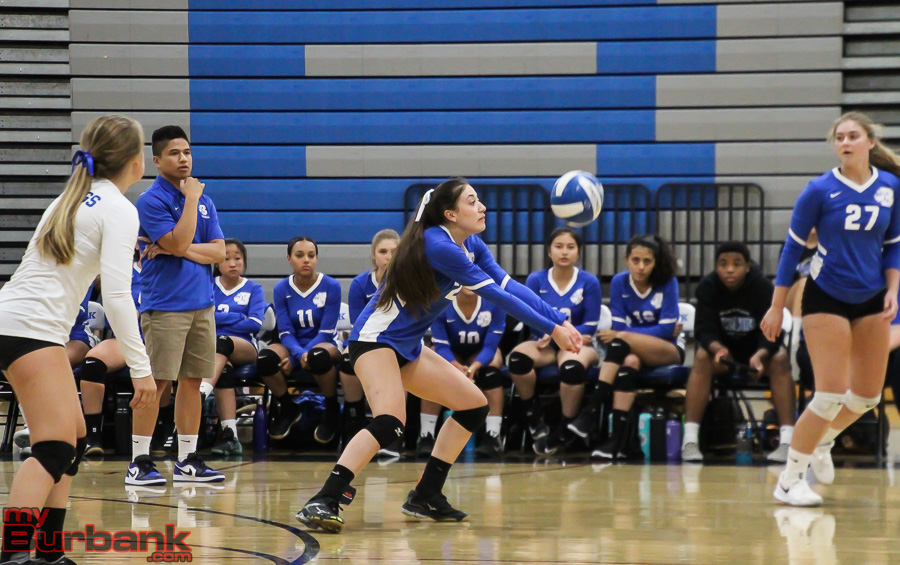 It was only the first set and there would be at least two more sets for the Burbank High girls’ volleyball team.

Hoping to get out quickly, the Bulldogs dashed ahead 23-16 when junior opposite hitter Tamryn Betts (nine kills and five digs) collected a spike.

“It’s a tough one to swallow, but with the mental toughness that we have and the resiliency that we have, we’ll bounce back, go back in the lab and work hard again,” Burbank coach Karl Rojo said of his team’s tough loss.

The Falcons would get to within 23-17 on a winner from junior outside hitter Jamie Santos.

A spike from senior setter/opposite hitter Isabella Doom would make it 23-18, but Burbank would ease in front 24-18 on a stuff from junior middle blocker Bianca Hudson (six kills with five blocks).

When Doom and senior middle blocker/opposite hitter Laine Stubbs combined on a jam, the Falcons were within 24-22.

Doom’s spike evened it at 24-24 and a service winner from Santos pushed the Falcons ahead 25-24.

A kill from senior outside hitter Brandice Hibbard (10 kills and six digs with an ace) leveled it at 25-25.

Crescenta Valley (19-8 and 4-1 in league) would capture the next two points including the set-winner by Santos (15 kills and four aces).

The initial set was close early on and included five ties before a winner from senior middle blocker Leah Tawil (four kills and one block) handed the Bulldogs an 8-6 lead.

The Bulldogs would go on a 10-4 spurt and lead 24-18 that included kills from Hudson that made it 16-14 as the Falcons asked for time, and senior outside hitter Katie Treadway’s dagger for a 19-15 edge.

“The first set I thought we were doing good, but we were making little mistakes that kept adding up, so we kind of lost our momentum a little bit and we couldn’t get back into it. In the second set we did a lot better,” said Treadway, a senior outside hitter who had a team-high 11 kills with five aces and 25 digs. “We need to be calm and execute.”

Treadway then added: “For me, I need to remember this game and know what I did wrong and what we can do better,” she noted. “And what I notice that I can talk to the team about. And what we can do better for the next game. How we need to be on the same page mentally and our plays. But after this day, though, we forget about it.”

The second frame saw the Bulldogs bolt ahead 10-0 on a kill from Treadway. “If we lose a set, I try to get their energy up and try to get them excited,” she pointed out. “Me and Ashley [Eskander] try to calm each other down. We also need to know that we need to be more aggressive.”

Eskander is a senior setter and one of the team leaders who finished the match with 40 assists and 22 digs.

The Falcons answered with five straight points that cut the lead to 10-5, but Burbank still held a 14-7 lead when Hibbard added a kill.

A spike from Hudson gave the Bulldogs a 17-11 cushion and it became 19-11 on a service winner from Treadway as the Falcons asked for a halt in the action.

A kill from Betts made it 21-13, Treadway’s bullet pushed the advantage to 24-17 and a spike from Betts evened the match at one set each.

The third game was tied 3-3 on an ace from Burbank junior setter Kassandra Gonzalez, but the Falcons forged a 7-4 lead on a kill from senior middle blocker Ellie Song.

Crescenta Valley darted in front 10-7 on a kill from senior outside hitter Lizzy Kerman (match-best 17 kills with four aces) and 13-8 on a winner from junior libero Emily Boghozian.

“When we started out, we seemed a little rattled, a little nervous. We just kept telling the girls to stay calm. Stay calm. Take a deep breath,” Crescenta Valley coach Matt Simons said. “In that first game, the pressure came off because we were down so much. They stopped making silly mistakes. The girls played with a confidence that they didn’t play with earlier in the set.”

Simons went on: “When we were passing well, we were able to run our offense and the game is so much easier,” he said. “When we pass well, we’re able to run all aspects of the offense. It kind of stabilizes us.”

Doom’s kill made it 14-8 and when Doom (18 assists with four kills and four blocks) tossed in another spike, the Falcons were in front 18-8.

Back-to-back aces by Santos made it 23-11 as the Bulldogs needed time to regroup. A stuff from junior middle blocker Emma Glaza for the Falcons put them ahead 24-11 and a kill from Kerman salted the set.

An ace from junior libero Hannah Tanita handed the Falcons a 4-2 lead in the fourth set, but the Bulldogs rallied and moved ahead 7-5 on an ace from Gonzalez.

Crescenta Valley settled down and led 13-9 on a kill from Santos and 16-12 on an ace from Tanita.

“On any given day, a different girl can be the hero,” Simons said. “We don’t have one girl that we rely on. That we lean on. That balanced attack really helps.”

The Falcons darted ahead 19-15 on a kill from Kerman and 21-15 on a service winner from Kerman.

Crescenta Valley inched in front 23-16 on a kill from Santos and Doom’s rocket was the set and match winner.

Senior defensive specialist/libero Morgan Bolger added 25 digs for the Bulldogs, while junior setter Cadie Carlson had 15 assists and two blocks for the Falcons.