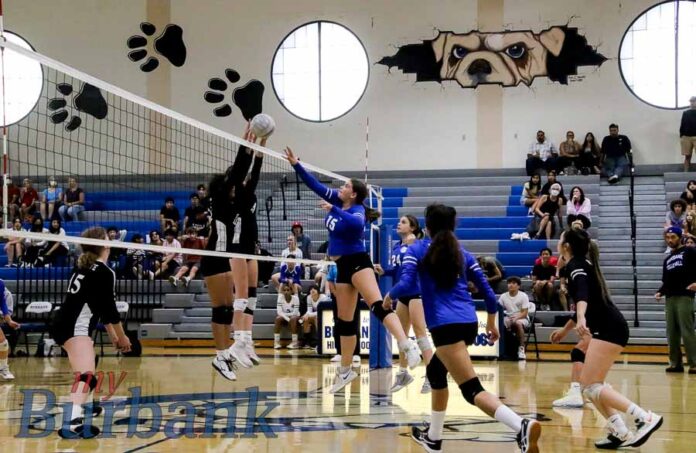 A week into the season and the Burbank High girls’ volleyball team finds itself in catchup mode.

Yet, there are no signs of panic while hunting for the squad’s first win of the campaign. It’s a matter of showing more flashes of consistency on the court in order for the Bulldogs to achieve victory.

“It’s still very early in the season and there’s no reason to panic,” Burbank coach Paolo Fabregar said. “Right now, it’s just about trying to build some consistency and using the [nonleague] matches to help us get ready for league.

“We’ve got to make some adjustments around the court. Sometimes we’re trying to make that perfect hit. We just need to keeps things a bit more simple.”

Burbank (0-4) showed some signs of improvement in the third set following a disjointed effort in the second set that sparked Immaculate Heart (3-2).

The Bulldogs, who finished fourth in the Pacific League last season and fell to Viewpoint in a CIF Southern Section Division IV wild-card match, led only once versus the Pandas at 1-0 to begin the third set.

The Bulldogs received an ace from junior middle blocker Raquel Fox to knot the first set at 5. Immaculate Heart built a 13-9 lead before a kill by Fox brought the Bulldogs to within 13-10.

The Pandas, who received a match-high 13 kills from Kimi Watanabe-Mayhew, closed out the first set with an 8-1 run.

The Bulldogs couldn’t get on track in the second set, falling behind, 10-1, on an ace by Sam Torres.

“We struggled in the second set, and we just couldn’t get things to go our way,” said Fox, who finished with a team-high five kills. “We didn’t let it get us down, and we played a lot better in the third set. We just have to figure out some things heading into the next game.”

Immaculate Heart jumped out to a 16-5 lead in the third set before Burbank pulled to within 18-14 on an ace from Fox. Later in the set, a Fox ace brought the Bulldogs to 20-18 before the Pandas closed out the win on a 5-1 run.

Burbank will next compete in another nonleague home match versus San Marino at 3:30 p.m. Thursday. The Bulldogs will then meet Chatsworth in an intersectional road match Sept. 6 before beginning league competition at home versus Hoover on Sept. 8.