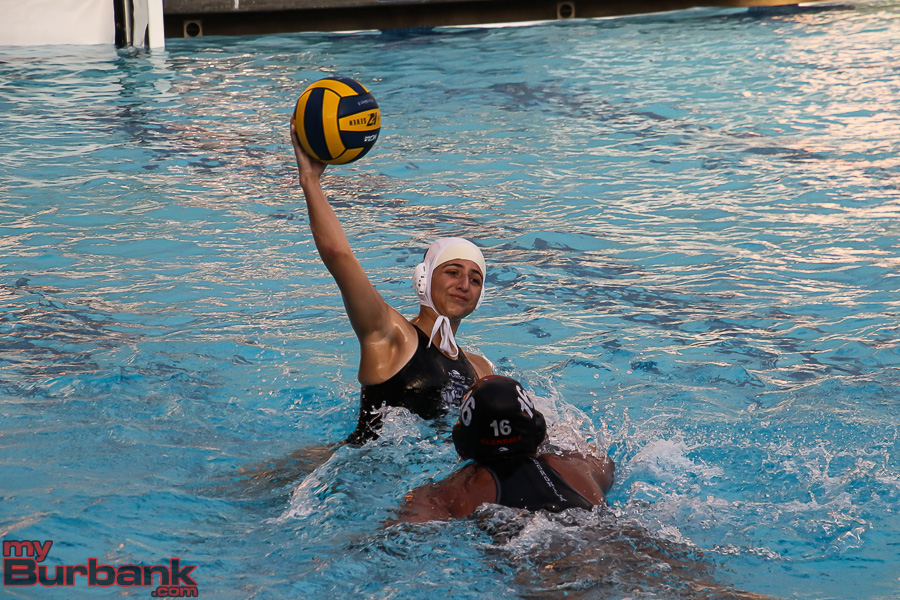 Before the Burbank High girls’ water polo team squared off against visiting Glendale in its Pacific League match on Thursday, six seniors were recognized for their contributions in and out of the swimming pool.

Once the clash began, it was evident these two teams were nearly identical, and they were, but in the end the Bulldogs managed to escape with a 12-11 triumph.

“Too close for comfort. Especially since it was Senior Day. Their heads weren’t in the game like it usually was,” Burbank coach Melani Aghazarian said. “And I feel like we didn’t  play to our full potential. It didn’t really pick up at all.”

Aghazarian added: “It may have been a win, but I expected more from my girls,” she noted. “I’m proud of them for pushing through. That wasn’t their full potential. They weren’t as focused. Their heads were somewhere else.”

Leading the charge was sophomore Julie Kim, who garnered a team-best five goals including three in the first half as Burbank led 6-5 at the intermission.

Brice continued: “We’ve played together for all four years of high school, so we have a strong bond with one another and we can trust each other,” she pointed out. “And this year we’re running a lot more plays and I feel more confident when I play.”

Brice said that the pre-match festivities maybe made the team perhaps too charged.

“We were very excited and a little nervous,” she said. “So we were just kind of jumpy. And it took us until the second half of the game to really get focused.”

Glendale senior attacker Jamie Fritz was a one-girl wrecking ball after scoring a match-best seven goals that included five in the second half.

“We’re a very young team and we’ve come a long way this season, especially in the last two weeks the amount these girls have grown is phenomenal,” Glendale coach Garrett Fritz said. “But there is definitely some things we still have to learn in terms of maintaining your cool like in an advantage situation. In these situations, you can’t get too over excited.”

The Bulldogs evened it at 2-2 on a 10-foot laser from Kim with 4:22 remaining on the clock and Brice’s 12-footer with 31 seconds left in the opening quarter.

Glendale senior attacker/defender Bernice Doronila found the range on a 10-footer, 14 seconds later for a 3-2 lead.

The Bulldogs outscored the Nitros 3-2 in the second period as Shabhazian connected on a 10-footer with 5:51 left that made it 4-3 and Kim’s 12-foot tally, 50 seconds later extended Burbank’s advantage to 5-3.

Stubborn, Glendale evened it at 5-5 when Doronila unloaded a 10-footer with 2:59 on the ticker and Fritz added a six-footer, 13 seconds later.

The final tally of the second quarter was an eight-footer from Brice and it proved to be the key goal because each squad scored six goals in the second half.

Glendale tied it at 7-7 on a 16-foot goal from Fritz, only to see the Bulldogs respond with back-to-back goals as Kim scored on a 12-footer with 4:25 showing and Stepanyan’s eight-footer with 3:31 left made it a 9-7 cushion.

The fourth quarter began with Fritz scoring on an eight-footer and 4:42 left that narrowed Burbank’s lead to 10-9 and Doronila’s six-footer knotted it at 10-10 with 3:34 left.

Burbank scored two of the next three goals as Stepanyan’s eight-footer with 3:13 on the clock broke the deadlock and made it 11-10 and Kim’s 10-footer with 2:27 showing increased the lead to 12-10.

Fritz’s 16-foot rainbow with 2:07 showing trimmed the margin to 12-11 and it would be the last goal, as neither team scored the rest of the fourth period.