Performing is only a slice of the pie at Carroll’s Corral, the first show of the new school year for the choral music program at Burbank High School. 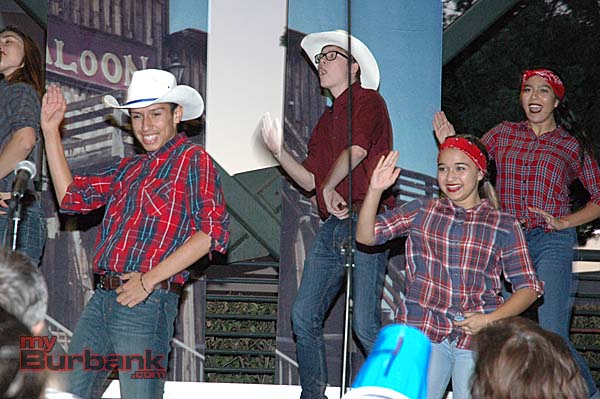 Parents with the Vocal Music Assn. cook up two varieties of chili — meat and vegetarian. Guests pile in shoulder to shoulder at tables in the lunch shelter while students take to the risers and perform Western songs like “Oklahoma”, “Buttons and Bows” and “Don’t Fence Me In”. In between numbers, small groups of students assigned to tables take orders then serve up salad, chili and cornbread along with lemonade or soft drinks. And let’s not forget the brownies and chocolate chips cookies for dessert.

“It’s a good learning opportunity for us because we have been doing some of the pieces every year which is great because the older kids can help mentor the younger kids and it makes it very exciting for the new kids to get to instantly make relationships with the older kids which is awesome,” he said. 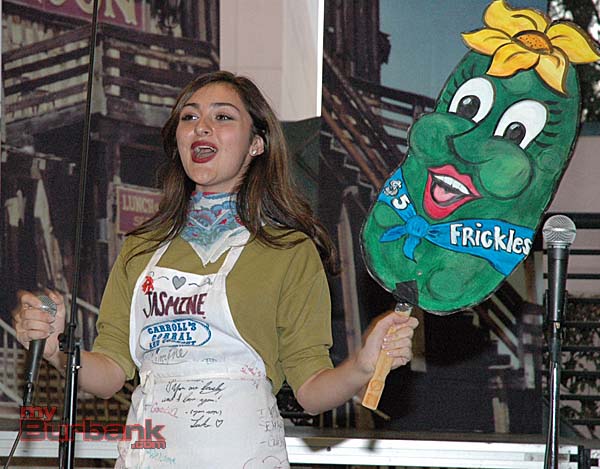 Jasmine Cooper sings the praises of batter-fried pickles — or Frickles as they are lovingly called. (Photo by Joyce Rudolph)

Students in the different choirs vary in grade levels, so it gives them an edge for integrating quickly because they have a good opportunity of knowing at least someone in their other classes on campus, Carroll said.

The parents are great at getting the food ready and making sure everything runs smoothly. Having the students take the food orders and serve the guests is an additional component of the experience. 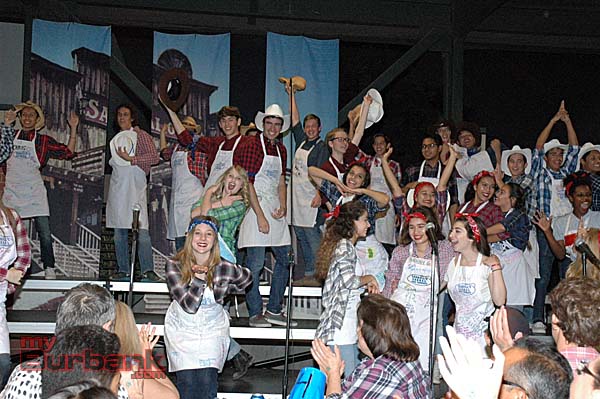 “If the students succeed in learning to sing and dance that’s exciting but we get so much more out of all the extra things that we do outside of performing and one of them is learning how to interact with people they don’t know,” he said. “In this case, they are singing waiters and waitresses and they have to go meet their table, talk to them and have to be more open and interactive than they are on the stage. So it’s really a great training for them to learn how to talk to adults…and it’s their first taste of serving other people and in this setting I think it’s a lot of fun.”

Connor Thompson, 17, a senior, has been in the choir for all four years at Burbank High School and all three years at Muir Middle School.

The most important thing he has learned in choir is how to sing properly, he said. Also traveling to competitions has taught him the importance of making a good impression through good behavior and showing humility. 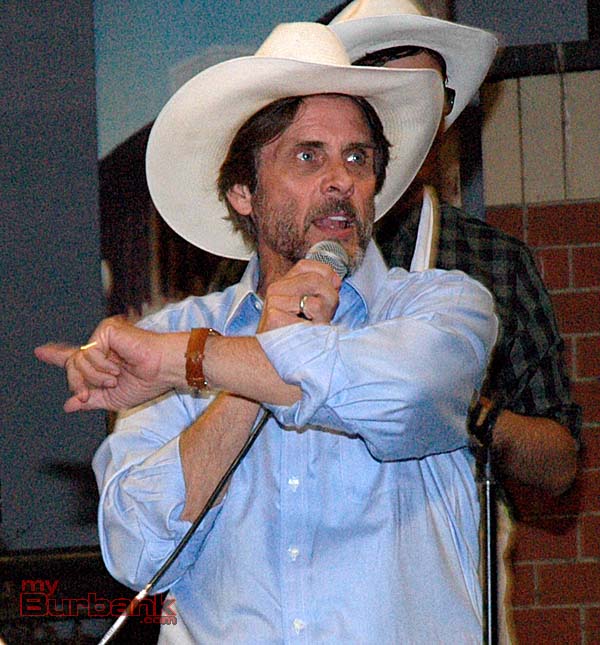 Actor/producer Shawn Stevens, who was in the choir program while attending Burbank High School, was master of ceremonies for Carroll’s Corral and conducted the live auction (Photo by Joyce Rudolph)

A bonus is singing with a great group of people who love what they are doing, Connor said,

“The energy bounces back and forth from the other choir students,” he said.

Serving as master of ceremonies for the event was actor/producer Shawn Stevens who graduated from Burbank High in 1976 and went through the choir program himself and with his children.

He philosophized about a parent’s role with the program.

“When your kids are in the choir program, it’s your responsibility to be here to support them,” he said. “You only become a volunteer when you don’t have to be here.”

Proceeds from the evening go to bus transportation to competitions, choreographers, costumes, sets and scholarships for students whose family can’t afford the costs to participate.

About 25% of the 150 choir students in the program receive financial assistance, said Vocal Music Assn. President Will Woods.

“The cost to participate is quite significant because the choirs compete on a national level in the most prestigious competitions,” he said. “to compete at that level we need to have choreographers, costuming, set design, musicians and musical arrangements. Those are the things that drive all our costs.”

Earlier this year, the association held a Walk-a-thon and the major fundraiser called A Night of Magic is scheduled for Nov. 12 at the Pickwick Banquet Center. Tickets are $80 and include dinner, entertainment by the choirs, silent and live auctions and opportunity prizes. For reservations, donations or sponsorship advertising, go to BHSVocal.com or call (818) 415-0477. 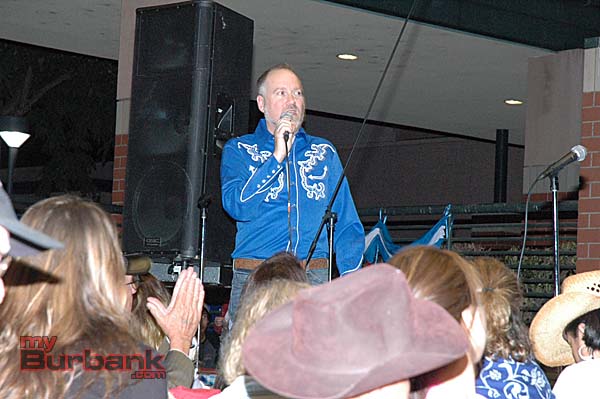 A highlight of the Carroll’s Corral was when the a cappella groups were auctioned off to help raise funds for the program.

Lina Kassir bid the highest in the live auction to have the Sirens perform at daughter Jaylene’s Sweet 16 birthday party.

“The choir program is great!” Lina Kassir said. “My daughter loves it! She said she wishes she had joined the choir last year.”

Sandy Dennis, a volunteer with the Burbank Historical Society, bid the highest for the Gentlemen’s Octet, which will perform at the society’s annual Christmas party, she said.

“I just hope more people find out about the museum and come to see what wonderful exhibits we have that tell the history of Burbank,” she said.

The museum is open from 1 to 4 p.m. on Saturdays and Sundays and is located next door to the Creative Arts Center.