This weekend, Rep. Adam Schiff (D-Burbank) hosted the annual 28th District Congressional Art Competition Forum and Exhibit at Van De Kamp Hall in Descanso Gardens.  During the exhibit, attended by more than 200 students, teachers and parents, Schiff announced that Joshua Dominic Macapagal’s piece “The other side of cool” had won first place and will be included in the nationwide Congressional Arts Competition: An Artistic Discovery in Washington, D.C.  His artwork will hang in the United States Capitol for one year, along with that of other winners from around the nation. Macapagal is from Burbank and attends Burbank High School.

“Every year, I get the opportunity to see some absolutely amazing artwork submitted by high school students from across our community,” said Schiff.  “All of the students involved deserve recognition for their hard work and exceptional talent, and I hope that they will all continue to enrich us with their artwork.  I particularly want to congratulate Joshua, Nick, Vardui and Nelli on being named the winners, and look forward to enjoying their artwork in the Capitol and my offices throughout the coming year.  Great job to everyone!” 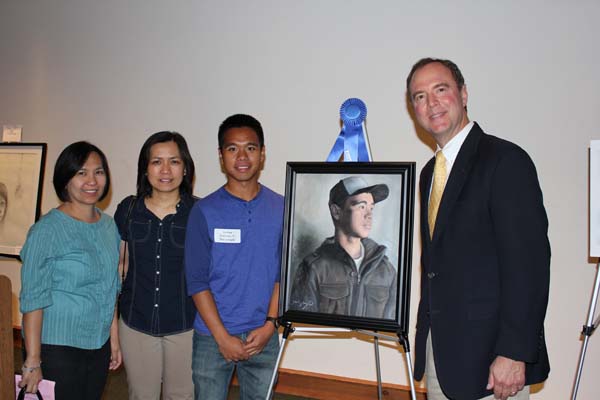 This year, there were 50 entries representing 19 high schools in the 28th Congressional District.  Each student participant received a Certificate of Special Recognition from Congressman Schiff.  The Congressional Arts Competition began in 1982 to provide an opportunity for Members of Congress to encourage and recognize the artistic talents of their young constituents. Since then, over 650,000 high school students have participated in the nationwide competition.