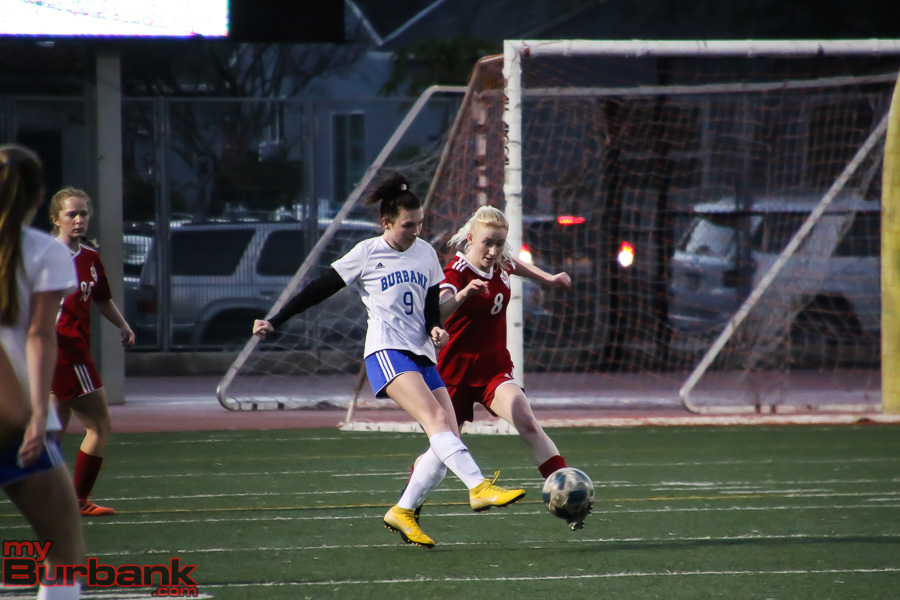 It wasn’t for a lack of desire or skill or motivation that prevented the Burbank High girls’ soccer team and its opponent, Hoover, from scoring in Friday’s Pacific League match.

It was that nearly two weeks worth of rust had accumulated on both squads and that was the primary culprit in a 0-0 stalemate at Kemp-Kallem Field.

The last time the Bulldogs took the pitch was December 19 in a 7-0 loss to host Crescenta Valley. Hoover’s last action was December 23 when it traveled to play Alemany.

“We just came out flat,” Burbank coach Pablo Diaz said. “We didn’t practice during the break. Our first practice was Monday, then we had a practice on Thursday and today just coming from the break, some of the girls were slow and they told me they were out of shape.”

Diaz added: “They came in and they were flat,” he noted. “But you’ve got to give it to them (Hoover). They played well and they made no mistakes in the back. We had a few chances that we should have put in the net and we didn’t. That’s the nature of the game.”

There were a few decent scoring opportunities for the Bulldogs, but they were not seized.

Payind’s 30-yarder in the sixth minute was off target and in the 11 minute, Chase’s 20-yarder also missed.

Emma Molloy’s 15-yarder in the 15th minute was off and so was Katie Molloy’s 45-yard free kick in the 17th minute.

Emma Molloy’s 35-yarder in the 21st minute didn’t hit the target and Chase’s 35-yarder drifted too far left in the 26th minute.

Hoover finally broke the streak when Simmons unloaded a 35-yard free kick in the 29th minute, but Emma Molloy responded with a 25-yard kick a minute later.

After a throw in the during the 32nd minute, Torres contributed a 15-yard attempt followed by a 15-yard blast from Simmons, two minutes later.

The opening half came to a conclusion on a corner kick from Katie Molloy in the 39th minute.

The Bulldogs took the first three kicks of the second half as Payind had a 25-yarder in the 41st minute and was followed in the 42nd minute by a 30-yarder by Chase that sailed too far right. Payind tossed in a 30-yarder in the 43rd minute, but it was much too high.

Hoover struck back as Martinez uncorked a 40-yarder in the 51st minute that didn’t have enough on it and Coopersmith’s 25-yarder three minutes later, was too wide.

Payind’s breakaway from 35 yards was wide left in the 56th minute and in the 57th minute, Payind’s 30-yarder was again too far left. Payind’s 25-yarder hit the football goal post behind the net in the 61st minute.

A 40-yarder from Torres in the 69th minute failed to find the back of the net and Coopersmith’s 20-yarder a minute later also didn’t hit the net.

A 35-yarder from Torres in the 70th minute was off the mark and less than a half minute later, Emma Molloy’s 30-yard was also off target.

In the 73rd minute, Chase added a 25-yarder and in the 77th minute, Katie Molloy delivered a 30-yard penalty kick.

The match ended on Chase’s 35-yarder in the 79th minute which was wide right.