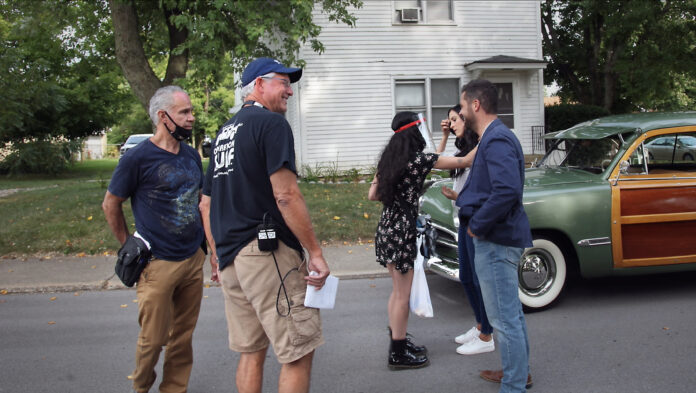 The heartwarming spirit of the fictional town of Mayberry, North Carolina, is being kept alive through the creative mind of director, writer and animator, Stark Howell.

Stark has deep roots in entertainment, as he is the son of legendary actor Hoke Howell. At the urging of Rance Howard, the father of actor Clint Howard and director Ron Howard, Hoke moved the family from the East coast to Burbank when Stark was three years old. Here, Hoke was able to find greater opportunities in entertainment and went on to make appearances on shows such as The Wonder Years, The Brady Bunch, and Happy Days, while additionally acting in a variety of films over the course of his career.

One of Hoke’s most memorable parts was playing the character Dud Wash in the classic TV sitcom, The Andy Griffith Show. Each year, the show is celebrated in Andy Griffith’s hometown of Mount Airy, North Carolina, at the Mayberry Days festival. This event has taken place since 1990 and includes visits from tribute artists, original cast members and their family members as fans enjoy reminiscing about the amusing and good-natured series.

In recent years, Stark attended the festival, where he signed autographs for attendees, answered questions about his father, and participated in a parade with fellow event guests. This experience inspired him to create “a fish out of water story,” he says, based on the unique circumstances he found himself in during the celebration.

“It was just very surreal,” Stark said of attending Mayberry Days. “I thought, if I can finish a script with a decent story, I’d love to get the fans involved in it and throw it out there on a crowdfunding platform. [We’ll] see if we get some money, and make it outside of the Hollywood influence. So that’s what I did.”

Within three months, Stark finished a script for the project, which he titled Mayberry Man. The plot centers around Chris Stone, a conceited film actor who is facing punishment for speeding in a small town. He is subsequently sentenced to attend Mayberry Fest, a celebration inspired by the real-life Mayberry Days event, over the course of a week, during which he learns valuable lessons about life, family and friendship.

After writing the script, Stark began a grassroots campaign to fund the film. His brother, producer and actor Cort Howell, came on board as a producer of the project, as did Gregory Schell, the son of actor Ronnie Schell, who played Duke Slater on The Andy Griffith Show spinoff, Gomer Pyle, U.S.M.C. In addition, Andy Griffith’s daughter, Dixie Griffith, served as an executive producer. Other supporters of the film include Karen Knotts, the daughter of Don Knotts, actress Jackie Joseph, and actors Butch Patrick, Ronnie Schell and Jamie Farr.

Burbank native Clint Howard is another loyal backer of the project. He portrayed the supporting role of Leon in the Andy Griffith series alongside brother Ron Howard, who played Opie Taylor. Clint has voiced his support of Mayberry Man through numerous promotional videos. In one of these promos, Clint and Stark travelled to Myers Lake together for a memorable video exploring the setting where filming for the opening sequence of The Andy Griffith Show took place.

This long list of Mayberry Man proponents further fueled Stark to direct a film which would satisfy fans and descendants of the enduring tv program.

“It was a little bit of pressure,” Stark said of writing and directing Mayberry Man. “I didn’t want to let anybody down, but I’m as big a fan as I am a legacy of the show because I grew up watching the show. It’s in my wheelhouse. So I knew what the audience would want because I knew what I would want as the audience. I know every episode. It’s kind of weird because in one sense, my dad was on [the show], but in another sense, I was just a fan like anybody else.”

Due to the dedicated support of Andy Griffith fans, the film was able to receive enough funding for production, and filming took place in September of 2020. While carefully following COVID-safety guidelines, the entire cast and crew remained healthy during the 18-day shoot. The majority of scenes were shot in Indiana, and filming also took place in three other states, which included a stop in North Carolina during the Mayberry Days Festival.

Since its Sept. 2021 release, viewers and critics alike have been effusive in their praise of the uplifting movie. The Dove Foundation calls Mayberry Man “a charming, homegrown film that not only showcases true community, but features segments for all Andy Griffith fans,” while Hollywood Insider describes the movie as “the perfect fall family film.” The movie has a special, lighthearted quality that mirrors the captivating charm of original Andy Griffith episodes.

“It’s a feel-good movie where you can just smile and feel like you went away and watched something that was not dark and wasn’t about all kinds of crazy stuff that’s out there now,” Stark said. “It’s not a superhero movie, and it’s not a car chase movie, so I think it’s just refreshing [and] something different.”

After graduating from John Burroughs High School, Stark attended the ArtCenter College of Design in Pasadena, where he majored in Illustration. He was then recruited by Disney’s television animation department, participated in six months of storyboard training, and went on to take part in various Disney and Nickelodeon animation projects for 30 years. He has contributed to many memorable cartoon programs over this period, including directing 17 episodes of Hey Arnold!, and serving as a storyboard artist for What’s New Scooby Doo?, Jake and the Never Land Pirates, and Recess: School’s Out.

Although he has a love of animation, Stark has always carried a deep passion for storytelling through live action projects. He says Mayberry Man felt like the right venture to explore his enthusiasm for this medium of entertainment. Furthermore, upon embarking on shooting for the film, he realized the ways in which his years in animation had prepared him for live action projects.

“For 30 years, I made movies, and I was pretty much in control of everything because there’s a blank piece of paper until you draw it,” Stark said. “It doesn’t exist. So [animation] really is the purest form of filmmaking there is. I think that was good training for my live action. It really wasn’t that hard when I finally did it, because I feel like I’ve been doing it for 25, 30 years.”

Similar to the quaint, imagined town of Mayberry, living in Burbank as a child was idyllic for Stark, his family members and friends. He resided in the city until he turned 18, and now looks back on this simpler time with nostalgia and enjoyment.

“In Burbank, we all went to the same grade schools and junior highs and high schools if you lived down in the flats where Burroughs [High School] is. It was just a great time,” Stark recalled. “There wasn’t a lot of traffic. There weren’t a lot of tall buildings like there are now. So it was really idealistic, very much like Mayberry, really. It was just a really fun place to grow up.”

Stark is now working on a script for a sequel to Mayberry Man, which he says he will present to investors for a higher budget production. Through his varied work in entertainment, Stark has mastered the art of storytelling and has breathed new life into the original Andy Griffith series. Rather than simply remaking the show’s storyline, he has crafted a unique, yet believable plot that has just enough moments of Andy Griffith references for fans. He plans to continue this approach and deliver another quality motion picture to loyal audience members awaiting the impending second film.

“The story is everything, and I’m always conscious of how my audience is going to respond to what I’m presenting to them at that moment,” Stark said. “It’s a pretty simple story and it’s very predictable, but people like predictability…I just want to do a G-rated good time, and I think I haven’t cheated the audience too many places.”

To find out more about Stark Howell, visit his site here.