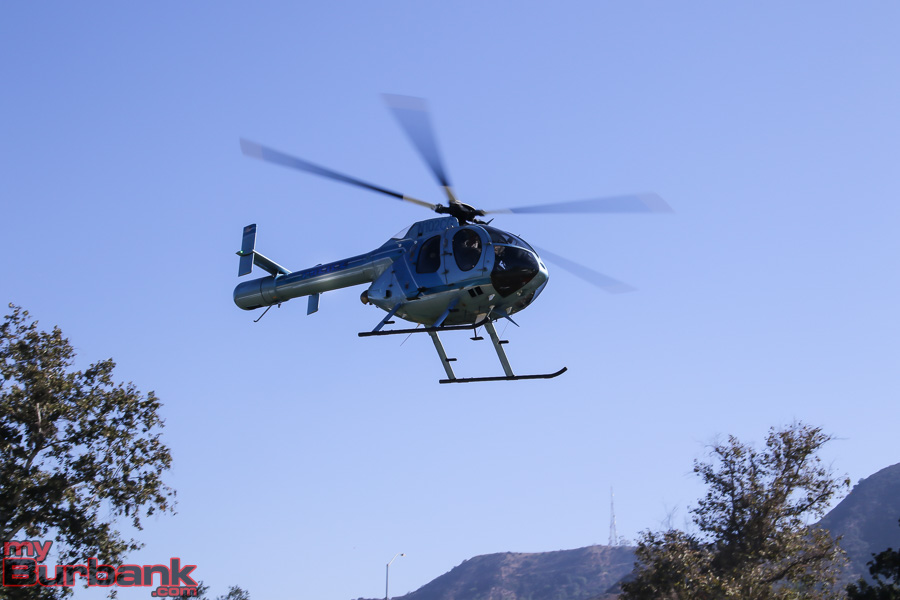 Burbank police combined their land and air skills to arrest a man after a report of a man in the hills with a possible rifle.

Around 2:55 pm on Monday police were called the the hiking trail above the Wildwood Canyon Nature Center for an individual who was allegedly hunting with a ‘long gun’ (rifle) according to Burbank Police Sergent Derek Green.

A police helicopter was dispatched to see if they could locate the man and they found an individual inside a tent with what appeared to be a long gun besides him. With Burbank police responding to the area, the air unit made an announcement over their loud speaker for the man to come down to officers. The commands were ignored.

“Due to reports that the man was possibly armed with a rifle or similar weapon, additional resources were deployed, which included members of the Burbank Police SWAT.” according to Green. He said the operation involved about 15 officers.

Over the next couple of hours, Burbank Police started to develop a plan to get to the man who had now started a small fire by the tent. They called in the Burbank Fire Department’s ‘Gator 16’, which is a four wheel drive vehicle used to navigate the hillside, to help transport officers up the hill. They also deployed their new drone to assist officers.

Once officers reached the small camp, the man immediately complied to officers and was taken into custody without further incident.

The Nature Center was closed during the incident and the staff was relocated to McCambridge Park during the operation.

Green said that once officers had the man in custody, they located two BB guns, a pistol and rifle, near his encampment.

The man, identified as Nelson Rivera, a 28-year-old transient, was placed under arrest for starting an unlawful fire. He is being held on $20,000 bail and was due in court Wednesday. Green said that formal charges are pending review by the Los Angeles County District Attorney’s office.

Green also reported that it appears that this was the same person contacted on December 5 near Burbank Blvd. and Whitnall Highway after reports of a man with a gun.

Burbank Police responded to the area of Burbank Blvd. and Whitnall Highway after someone reported seeing a man carrying a backpack with what appeared to be a rifle attached to it. The man reportedly had a “camping gear” backpack, and also a knife strapped to his leg (clearly visible and not concealed).

Police located and contacted the man. They determined the item to be a B.B. gun. Police officers documented the response and released the individual.

The B.B. gun was not brandished, was not used in the commission of a crime, was not fired, was not used to threaten anyone, was possessed legally, and did not violate the California Penal Code or the Burbank Municipal code. The knife was possessed and carried legally. Therefore, only a detention was made in order to investigate the report, which led to the determination that no crime had been committed. An arrest, or a detention beyond what was reasonably necessary to complete the investigation, was not justified in this case.

“There was no crime at that time.” according to Green.