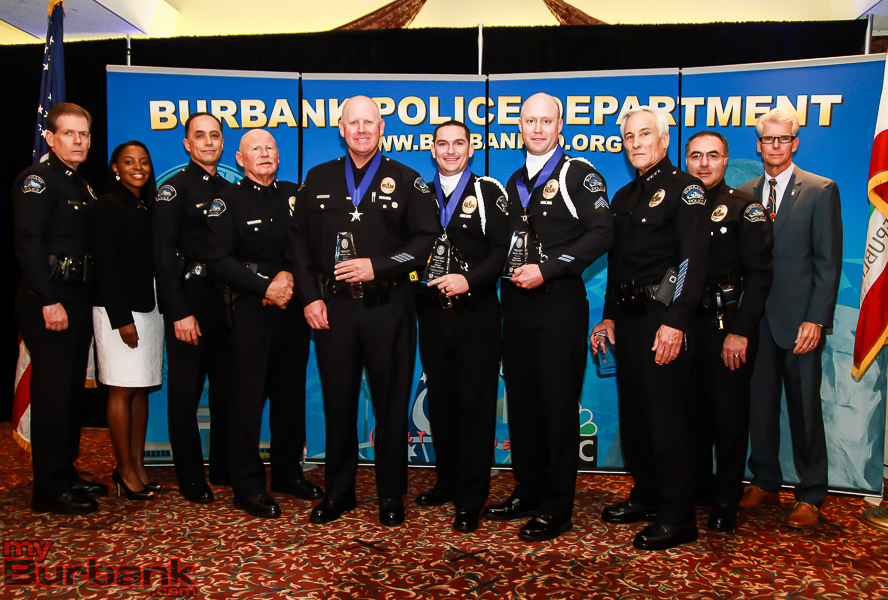 Michael Hastings, President of the Burbank Police Foundation, provided a background for the importance of a close relationship between the community and law enforcement, while painting a broad picture of the personal commitment of the police department in keeping the community safe, and an attractive location for both business and living.

One area resident who participated in the event, Fred Herrman, recently moved to town from the South Bay, and noted that Burbank “is a good place to live, with great police, and a lot to do.” He donates to the Police Foundation every year, because “he really appreciates the job they (BPD) does in keeping this a safe place to live.”

The awards highlighted the courage, commitment, innovative ideas, and citizen contributions to the community. Burbank Police Chief Scott LaChasse noted that in the words of Albert Schweitzer, “the only ones among you who will be really happy are those who have sought and found how to serve.”

July 2015. Officer Todd Burke and Detective Cody Roberts arrived on scene and saw a house that was completely overtaken by smoke. Hearing voices, they immediately went into action, crawling into the house on their stomachs, guiding 3 persons out, including a 90 year old woman. All would have certainly perished had both officers not set personal safety aside, putting the lives of others above their own.

For their bravery and selfless actions, placing the safety of our citizens above their own, officers Burke and Roberts were awarded the Police Star.

Jim Roope, a local media personality, provided great narratives behind each award, putting the bravery and accomplishments of each awardee into a very human perspective.

In January 2015, Officer Cameron Brown responded to a house fire near the 7100 block of Landis. Officer Brown learned there may be an elderly woman in the house, and he immediately raced in the burning home to investigate. He found the woman, and quickly brought her to safety.

For his bravery in entering the burning home, with the intent to save a human life, Officer Brown was awarded the Police Star.

Other awards provided a view into the difficulty officers have in dealing with painful, yet very human situations, such as child abuse.

In October 2012, Sergeant Celia Hawver was investigating the tragic death of a 5 week old baby. Suspecting potential child abuse, Sgt. Hawver was determined to bring justice to this poor soul’s life, and death. Using excellent interrogation technique, she was able to bring the baby’s father to confess to the crime, and closure to the tragedy.

For her commitment to bring justice this helpless, lost soul, Sgt. Hawver was awarded a Professional Esteem Award.

Other categories of awards highlighted the actions of citizens, such as the Caamal family, who went nose to nose with a home invasion suspect armed with an assault rifle. Or the police department’s citizen volunteers, including John Kemmerer, who has devoted thousands of hours to the department, or civilian employees of the department, including Crime Analyst Michelle Larson who is well known for her work with crime analytics and statistics, and developing a comprehensive departmental online training system.

Chief LaChasse emphasized that “each award recipient shares a common attribute – selflessness” and a desire to serve their communities.

You can learn more about the Burbank Police Foundation at their website (burbankpolicefoundation.org).

OFFICERS OF THE YEAR – For Your Selfless Service to the Community

CIVILIAN OF THE YEAR – For Your Selfless Service to the Community

CITIZEN AWARD – For Your Selfless Service to the Community

VOLUNTEER OF THE YEAR – For Your Selfless Service to the Community